Luke Davidson spreading the good word during a mission trip to Haiti.

A quick note: I've been informed that U of L accidentally printed on some of the UConn tickets that tomorrow's game starts at 8 p.m. It actually starts at 2 p.m. If you show up at 8 p.m., you're not going to have a good time.

Also, as always on Senior Day, tomorrow's game will be a Red Out. That means wear red. Senior Day festivities begin at 1:40.

Grantland's Shane Ryan writes about the nation sleeping on this Louisville team and the regret that could come as a result.

The experience factor is off the charts, and they're led by one of the best tournament coaches in history. If Louisville manages to win out and capture the AAC tournament title, a no. 2 seed is a real possibility, and suddenly an Elite Eight matchup with a team like Wichita State or Virginia might be all that's standing between Pitino and his third consecutive Final Four. Who would you rather have in a pressure situation - Hancock and Smith, or a reduced version of the Wichita State team they beat in last year's Final Four? Hancock and Smith, or a Virginia team with a total of zero players who have ever been a part of an NCAA tournament win? Hancock and Smith, or a Florida team that has lost in three consecutive Elite Eights?

Louisville will be in the ACC next season, and the uncertainty of the AAC's strength in relation to the rest of the country has kept it out of the spotlight for most of the year. It's a fluky schedule, a few early losses, and an unknown conference that have kept Pitino's crew under the radar, and it may be the first time a defending national champion that returns at least three key components had that luxury. The Cardinals were always going to be a tough out in March, regardless of how they were perceived. But the fact that nobody sees them coming? That's how a good team reaches greatness for a moment that's admittedly brief, but just long enough to steal a national championship.

Teddy Bridgewater has done the near-impossible and the left Bill Parcells "very impressed."

Louisville is up to a three seed in the latest Bracketology from Chris Dobbertean.

@CardChronicle Not sure what it does to our RPI, but let's put Arcade Fire on the schedule every year pic.twitter.com/4sSmkjTOco

Jeff Greer breaks down all six of Russ Smith's three-pointers from Wednesday night.

Speaking of which, the latest video look at the last 100 years focuses in on Cardinal basketball in the 1950s.

This story from Chris Gadansky brought the biggest smile to my face:

What you are about to read is the God's honest truth. My baby girl, who turned 1 in November, said her first sentence today. My wife heard it too. Clear as day.

We were all all watching the Louisville-Memphis game. For most of it, my eldest son Luke (who had the privilege of being a Rally's kid a few months back at PJCS) was shouting at the TV (as he is known to do during games). Only today, his little brother Leo, who has started the crushingly adorable habit of saying and doing everything his big brother does, was shouting the same things about a half second later.

My youngest Harper, the baby, who for the most part observes her brothers with a wide eyed skepticism and intrigue, while plotting, ALL the time plotting, how and in what manner she will grab whatever toy they are playing with, or turn off whatever electronic device they are using, or steal and drink whatever drink they are drinking.

I can see it. I can see her watching them. Plotting. Behind those eyes the machine is turning.

"Fools. FOOLS! Shall I go with the slight of hand, come up from behind and steal method while they are not looking? Or the tried and true, (yank) 'give me that, thank you, that's mine now, later!' approach? So many choices fools. So many choices."

But during the UL game, like I've never really seen her, she was fully engaged in their watching it. Doing what they were doing. Excited when they were excited. Bummed when they were bummed. Jumping around in her pigtails and pink Cardinals t shirt.

It had a thick baby accent. No doubt. But it was deliberate. It was said. It was unmistakable. And it was AWESOME.

I didn't believe it. I didn't believe it until my wife, who was in a completely different room but overheard the yelling, came in, swept her up in her arms and validated what I thought I had just hallucinated.

Pass it to Russ!

Go Cards. I am raising three fans for life. If I don't do anything else in this life, I will have raised three Cardinals fans for life. And that's good enough for me.

I've never seen "True Detective," but I'm told this is an appropriate reference: 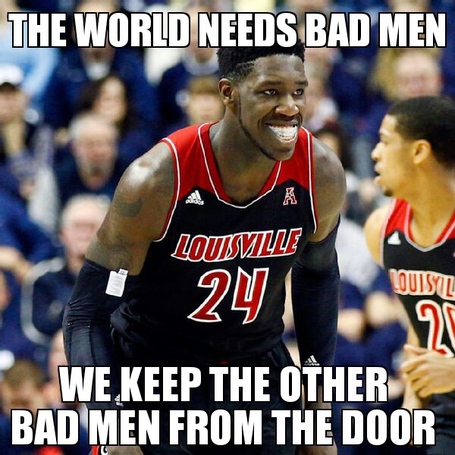 CN2 talks with Brian Brohm, who's headed to Winnipeg.

Fifteen former Cardinals will participate during Louisville's pro day. They are:

If you're a "Seinfeld" fan, I don't think you have any choice but to read this exhaustive ranking of Jerry's love interests on the show. 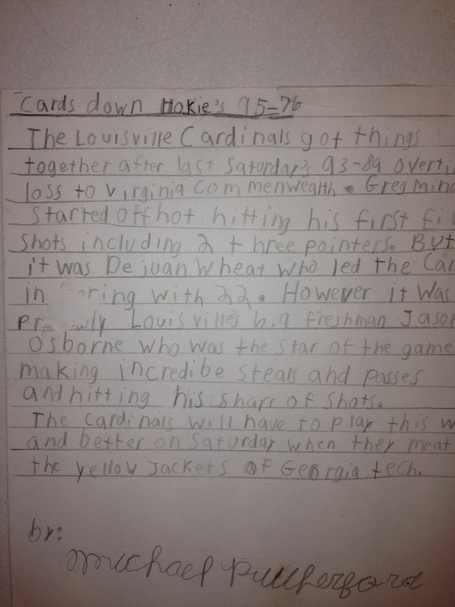 Legitimately drawers of that.

The 10th-ranked Louisville baseball team was upset by Miami (OH) 6-4 on Friday. The Redhawks entered the afternoon with a 3-6 record.

Congratulations to U of L women's baller Antonita Slaughter, who has been named the 2013-14 American Athletic Conference Women's Basketball Scholar-Athlete of the Year.

It's nice to see fear of squirrel/love of waffles-based predictions finally get some national attention.

A+ work by SMU's student section on Wednesday, blowing up the Waffle House portrait from Russ Smith's 2012 profile in Sports Illustrated along with shots of squirrels, because the Louisville Courier-Journal recently revealed that Cardinals backup guard Terry Rozier is terrified of squirrels.

When WDRB reporter Steve Andress Tweeted the above image prior to the game, Card Chronicle's Mike Rutherford responded by predicting Rozier would struggle and Russ would "go off." And how accurate was that prediction? Smith went off for 26 points, six rebounds and five assists, averaging 1.47 points per possession in one of the best games of his career, despite puking multiple times on the sideline ... while Rozier failed to score a single bucket. Waffles inspire; squirrels incapacitate.

Saturday afternoon is all about saying goodbye to Louisville's winningest class.

The Cards just keep getting bigger.

The Hartford Courant takes a look at Russ Smith before he was Russidculous.

Your standard AP preview of Louisville/UConn.