It All Matters: What Luke Hancock Taught Us About Life and College Basketball

Share All sharing options for: Senior Night Sentimentality: Luke Hancock, For The Dreamerzzzz

Life is funny, and decisions that random people make hundreds of miles away impact you years later in ways that are impossible to know or even imagine at the time.

So that's how Luke Hancock and Montrezl Harrell ended up at Louisville.

That's how, as everyone else recoiled in shock and horror at their teammate's gruesome injury, Luke Hancock jumped up and ran towards Kevin Ware. Of all the pictures that showed up in the wake of that game, this one stuck out in my memory more than any. Look at where Luke is and what he's doing and how this captured so many dramatic images at once: 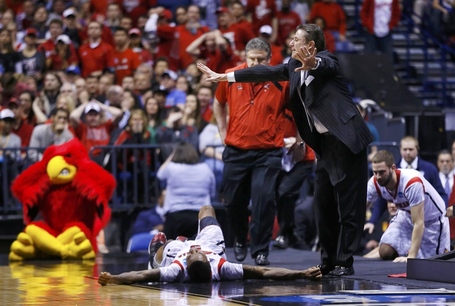 Hancock took Kevin Ware's hand, patted his chest, calmed him down and stayed with him for those horrible, horrible minutes after the injury. Luke was asked about it afterwards, and said:

"I wouldn't want to be alone in that situation, and I don't think he wanted to be alone," Hancock said, sitting in a small office at the team's training facility Wednesday as Ware held a news conference upstairs. "I just thought if I could talk to him and tell him he'll be all right, it might help."

What more can you ask of a young man? And really, what more could you ask of a group of seniors than Russ Smith, Luke Hancock, SVT and Hendo?

Throughout the day, we'll be saying goodbye to a group that has seen: two straight Big East championships and three straight championship game appearances, two Final Fours, a national championship, the last game in Freedom Hall, a Final Four Most Outstanding Player (the first to be a non-starter), a KenPom PoY, the President of the United States saying "Russdiculous," a walk-on becoming a legend in the blink of an eye and an Internet meme that will have to be retired after Luke Hancock's last game. And it's also a group that has won more games than any group of seniors in Louisville history. Pretty incredible.

And we start with Luke Hancock. When HotHot first started tweeting "For the haterzzz" in the summer of 2012, I heard it in my head as "for tha" in the same monotone and "haterzzzz" being an octave lower and really drawn out. Hot Hot says its more like the Kuric "AND YAM!" video, the way the guy says "with the bunnies" as higher on "haterzz" Either way, this meme was about lots of different things other than UofL sports, and Hot Hot was the main, if not only, person using it. I laughed IRL every time I saw it, though, and hoped it would catch on.

Like Rick Pitino occasionally sometimes maybe does, he saddled Hancock with unreasonably high expectations before anyone saw him play, calling him the best player in practice for a Final Four team, and naming him co-captain before he ever suited up. Well, he started off slow, hampered by an injury, and then all of the sudden he had legitimate, actual haterzzz.

Even yours truly was not entirely sold. Here's what I wrote in December 2012:

The expectations of Hancock were so unfair that anything short of a LeBron 30-7-7 every night would have been a disappointment. Throw in that every minute he plays means that Wayne Blackshear is not playing, Luke is really in a tough spot. If Pitino had sold him as someone who could play without making a lot of mistakes, was a team-first player who could make #Marrapasses and hit an occasional open 3 and made his living off YMCA-old-man-crafty shots, then I think people would be pleasantly surprised. In the opening game, on the first 6 or 7 Manhattan possessions of the second half, Luke caused turnovers or got stops on like every one of them.

It didn't show up on the stat sheet, and you would probably not have noticed because his abysmal 3 point shooting would have stood out at you, but he made a real impact on the outcome of that game. He is also recovering from injury and looks a little slow - especially on offense - but he is a nice piece of this team. Hopefully Wayne's development and Luke's improved shooting turns that piece into "15 minutes a game, hits open 3s and gets higher assist-per-minute ratio than anyone else on the team" and not the "Luke is our best player you guys just don't see it because he does things fans don't understand" piece.

Nailed it. Right on the money. That's why Rick Pitino blogs more than I do these days. Although, if we have Steves for rebounds, we need to have Lukes for defensive plays that result in a turnover or steal by someone else.

The backlash to the backlash started with Hot Hot. Every time Luke made a shot, or did one of his layups or old man moves and scored, or got a steal, or did anything, Hot Hot tweeted it. It caught on. One of the best posts in the history of the site (which Luke himself Instagrammed) chron'd the rise of Luke Hancock into the player he has become.

His shot didn't come around until very late in the year, but it always seemed like he hit the DAGGER 3 when the other team was on the ropes, within striking distance but still down 7+ points.

In the Big East semi-finals against Notre Dame, the dagger 3 developed in SUPER SLOW MOTION - I remember watching it, seeing Luke open on the wing before he even crossed half court, and standing up off my couch knowing it was coming and knowing it was going in, but, again, like, it was all in complete slow motion. Relive it starting around the 3:30 mark:

And then, of course, Atlanta.

Against Wichita State: finding Hendo for the second trey, the layup, his three, the last layup, the jump ball. "How was that?" he asked his father afterward, and I choke up thinking about that. Two nights later, against Michigan, he lived every kid's dream. How much more can fans ask of anyone, much less a kid in his early 20s playing a game with a round ball?

After the Final Four and all the backstory about his lack of recruiting, his injuries, his dad's illness, his coming to Ware's side, it became clear that Luke Hancock hasn't worked as hard as he's worked, been through painful rehab, taken the long, winding road from unrecruited out of high school to Final Four Most Outstanding Player by playing for himself, or for the haterzzzz, or anyone else. He cared about his teammates and his family.

Luke Hancock's career at Louisville embodies the mantra: It All Matters.

Every decision by a stranger far away, every extra minute rehabbing an injury, every deflection, every Lukes, every 3-pointer, every pass to a walk-on in the corner for a three in the waning seconds of a blowout that gives the shooter confidence for him to carry over into the next game, every steal that leads to a fast break alley-oop to take the lead in the national championship game, every moment with a parent that may be the last, every second comforting an injured player who then inspires the rest of the team by telling them to Win The Game. It all matters.

If Peyton Siva is Louisville Basketball, Luke Hancock is what we want college basketball to be. He went from literally not being recruited by any school to living every kid's dream. He made every single second of his career as a Louisville Cardinal matter, and no amount of thank yous or LUUUUUUUKES can ever repay him for it.