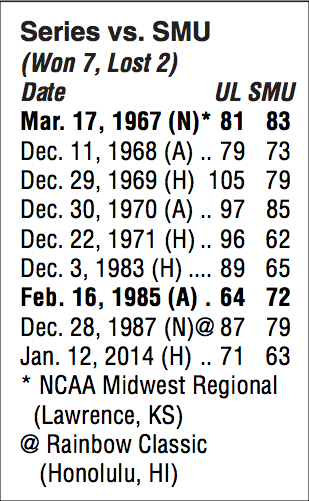 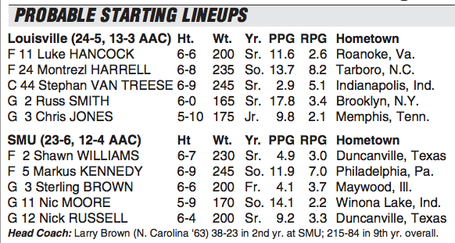 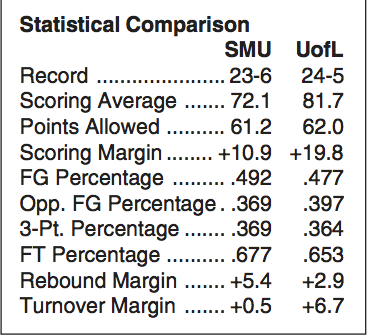 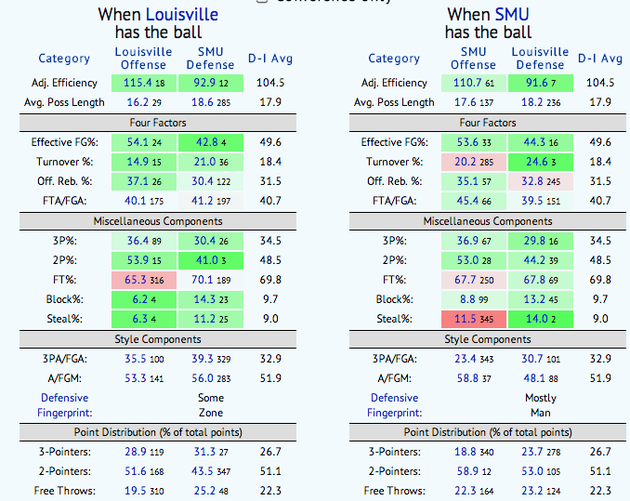 SMU, which is closing in on its first NCAA Tournament bid in 21 years, sits just one game back of Louisville and Cincinnati in the AAC standings, and still has a shot at claiming at least a share of the regular season crown.

The Mustangs are one of the best defensive teams in the country, limiting opponents to 36.9 percent shooting. They're also 4-1 against ranked opponents this season, and are a win tonight away from a perfect record at home.

--Louisville is second in the nation in turnover margin (+6.7) and is 25th in fewest turnovers per game (10.3). U of L has committed 10 or fewer turnovers in 20 of its last 32 games dating back to last year. The Cardinals are generating an average of 21.5 points per game off turnovers.

--SMU seniors Nick Russell and Shawn Williams will be honored prior to the game. The senior duo has combined for 135 starts.

--Louisville has not beaten an opponent on that team's senior night since 2009.

--Louisville is favored in tonight's game for a program-record 41st straight time. The Cards have not been an underdog since playing at Syracuse on March 2, 2013. All told, U of L has been the favorite in 69 of their last 70 games.

--U of L has lost a school record five straight games where both teams are ranked in the AP poll and the Cards own the better ranking.

--SMU's upset over No. 2 Louisville in the 1967 NCAA Midwest Regional (Lawrence, Kan.) marks the highest ranked opponent the Mustangs have ever defeated.

--Louisville's 24-5 start is the second best of the Rick Pitino era and the same record last season's national championship team had through 29 games.