Sophia Pearl. Game Face. Again, I'm all about the new trend of putting the kid's name right there on the picture. Saves me no less than four seconds of work, which I will not complain about.

This is just fantastic:

Russ was appropriately touched, and posted the picture (along with a message) on Instagram. 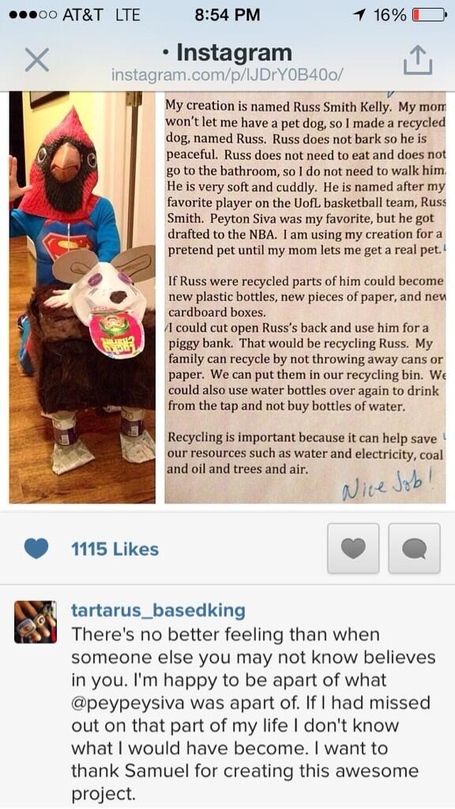 Somehow, we've reached a point where it's hard for me to imagine Louisville basketball without Russ Smith. I am completely unprepared for Saturday.

The C-J's Jeff Greer examines the stats from the final minutes of Louisville's six close games in conference play, and discovers the same thing Rick Pitino did: fouls and free-throw shooting have been the two biggest factors in the Cardinals' struggles.

I'm not entirely sure Louisville fans are aware of just how much tonight's game means to the folks at SMU. I mean they chanted "we want Louisville" at the end of their game against UCF last Saturday, they're planning squirrel scare tactics to use against Terry Rozier, and they've even got Kevin Malone from The Office talking about kicking our ass.

Disappointing news for me- I will not be in Dallas tonight for the @SMUMustangs game vs. Louisville. Do me a favor- kick their ass. #PonyUp

It's going to be intense, but here's hoping the Mustangs' big evening goes about as well as Kevin's poker run on Casino Night.

U of L announced Tuesday that Bobby Petrino will host radio shows on March 24th and April 10th to discuss the spring football season. Times will be announced at a later...uh, time.

Eric Crawford writes that the postgame crowd on Monday night speaks to the legacy of the Schimmel sisters.

SB Nation's Ian Boyd says Louisville is one of 10 non-blueblood college football programs that could win a national title before 2020.

None. The Cardinals finished No. 6 twice during Bobby Petrino's first stint, and now they likely have to beat Clemson, Florida State, and the ACC Coastal champion in order to finish higher.

How do they get the players?

The state of Kentucky gives the Cardinals only about five players per year. They have to steal their blue-chippers from Big Ten and SEC programs, with the sales pitch of working in Petrino's pro-friendly schemes. Moving to the ACC should give them greater access to said blue-chippers.

How do they even the playing field?

Petrino is a well-regarded offensive mind whose preferred methods have often been referred to as power-spread, but are basically modern pro-style. The key to the Petrino offense are his passing-game concepts, such as shallow cross, blended with a physical run game.

When Petrino has a big line, a running back who can bang between the tackles and catch out of the backfield, and a quarterback who can threaten every part of the field with accuracy, there's little opponents can do. Petrino's skills in teaching his passing game and gameplanning opponents are beyond most of his colleagues.

On defense, Petrino brought aboard Georgia's Todd Grantham. The Bulldog defenses under Grantham were largely defined by their zone blitzes and stunts, mixed with conservative coverages on non-blitz downs. When they had Jarvis Jones, this was generally effective. When they didn't have Jarvis Jones, it was less effective.

How do they get their chance?

The Cardinals have improved their odds of landing premier talent, and by hiring Petrino back, they have a coach with a history of developing NFL players. They'll be depending on his ability to build them into an elite program, as he was close to doing previously in Louisville and at Arkansas.

A very cool Year of the Cardinal infographic` from WhyLouisvilleisAwesome.com.

This video featuring Native Americans who came from California to watch the Schimmels take on Connecticut is awfully cool.

The 2014 U of L baseball intro video is pretty sweet.

To purchase tickets, contact the U of L Athletic Ticket Office at 502-GOCARDS.

No school has ever lost more or won less in a 6 year span than DePaul basketball in any conference ever! All Time Record!

Providence's Bryce Cotton, who took this website by storm a little less than five years ago, celebrated his senior night on Tuesday by playing all 50 minutes of a huge double overtime game against Marquette and hitting the game-winning free-throws with seconds left.

It's still one of the more unbelievable things that I've ever seen on the Internet (which is saying something), but I couldn't be happier that Bryce has gone on to be a star. Here's hoping we get to see him in the big dance.

Pat Forde names Rick Pitino as his "coach who should take the bus to work this week."

COACH WHO SHOULD TAKE THE BUS TO WORK

Rick Pitino (39), Louisville. The defending national champions have forgotten how to finish a close game against a quality team. In each of the Cardinals' five games against Cincinnati (two), Memphis (two) and Kentucky (one), they have had a lead in the latter stages and fallen apart. Against the Wildcats, they took a 52-51 lead and were then outscored 15-5 over the next six minutes on the way to a seven-point loss. In the two Memphis losses, the Tigers outscored Louisville an astounding 27-4 in the final four minutes. And in the two games against the Bearcats, the Cardinals were outscored 23-9 down the stretch - but got a split of the two games when Russ Smith made a jumper with two seconds left at Cincy. Bottom line: this is a veteran team that should be executing better at crunch time, and it reflects poorly on the coach.

One can only assume this has made Forde the single most popular person in Lexington.

We should gave known that Saturday wasn't going to end well.

Would anyone be that surprised if we lost out now. Me too.

Congrats to Brian Brohm, who is now a Winnipeg Bomber.

Outkast is coming to Forecastle.

A very funny and informative Q&A session with Jay Bilas via Adam Himmelsbach of the Courier.

We've got some fast dudes.

And some strong dudes.

Chris Smith, who controversially made the Knicks' roster at the beginning of the season, has now been waived by a D-League team.

Rick Pitino and Trey Lyles' father seem to remember the same recruiting conversation a bit differently. Lyles, of course, wound up picking Kentucky over U of L.

Louisville-SMU is the game of the night on Wednesday according to CBS.

Think about this for a second. Larry Brown took over the Mustangs' program less than two years ago and right now he has them ranked 18th in the country. SMU has quickly become the hottest ticket in Dallas and there are even whispers that former Dallas Cowboys star Troy Aikman has gotten himself a front row seat for Wednesday's game against the defending national champions. Louisville has all the requisites to get back to a third consecutive Final Four, but needs to show more killer instinct down the stretch than it did in Saturday's loss at Memphis. This is a big national stage for the Mustangs and a big task for Rick Pitino's team considering the raucous confines of Moody Coliseum.

Rob Dauster of NBC agrees with the previous assertion.

Two Hall of Fame head coaches square off on Wednesday night at SMU in a key AAC battle between two top 20 teams. (Imagine the look you'd give me if I said that sentence two years ago.) The Cardinals look like a team that could string together six straight wins in the NCAA tournament, but right now, they are destined for a seed that may make it difficult to pull off a third straight Final Four. SMU is as tough as anyone in the country in Moody Coliseum, however. Nic Moore vs. Russ Smith and Montrezl Harrell vs. Markus Kennedy will be fun.

Former U of L assistant Kenny Carter has landed at Youngstown State, where he will be the wide receivers coach, passing-game coordinator and co-special teams coordinator. Kenny was a big fan of the site and a very easy guy to get along with during his time here, and I wish him all the best going forward.

For anyone interested in supporting a good cause, the Bottoms up Bash supporting colon cancer prevention is this Friday night at the Mellwood Arts Center. Ticket sales for the event end tonight at midnight.

A Q&A with AAC Defensive Player of the Year Marcus Smith as he continues to prepare for the NFL Draft.

In somewhat unsettling news, betting on SMU is the Las Vegas Sun's "Vegas Play of the Day."

While fading San Diego State is far preferable than Louisville, this line feels out of whack. I expected closer to a pick'em.

It's almost as if the market hasn't caught on to how efficient the Mustangs have played all season. SMU is 17-8 against the spread, including 10-1 at Moody Coliseum.

The Mustangs played the Cardinals tough in their first meeting this season, losing 71-63 but easily beating the 13.5-point line. Louisville had a red-letter day from beyond the arc in that meeting, making 10 of 23 three-pointers, which is all but guaranteed not to repeat against SMU's smothering defense.

The Cardinals are struggling to find their shot at the moment as they're only making 25 percent of their threes over the last two weeks. The Mustangs have gotten far more competent offensively as the season has progressed and should shoot better than the 36 percent they managed in January at the KFC Yum! Center.

U of L hoops commits Shaqquan Aaron and Jaylen Johnson both picked up big individual honors this week.

SMU basketball has suddenly become the "it" thing in Dallas, and tonight is the biggest evening of all for the Mustangs.

But before we get to that, it's Larry Brown vs. Rick Pitino - two of the 11 active Division I coaches with NCAA championship rings - right here in the heart of Dallas on Wednesday night.

And it doesn't really matter that Pitino's Cardinals are the defending champs and that Brown won his title 26 years ago with the Jayhawks. This particular night and this particular game are about this particular SMU team trying to wrap up a 16-0 home record and send a message to future visitors.

Guard Nick Russell, one of two seniors who will be competing at Moody for the final time, thought about playing in games like this one - when he left Duncanville to start his college career at Kansas State.

But like teammates who passed through Villanova, Texas and Illinois State, it's in Moody Coliseum that they have discovered their place and closed in on their goals.

"Nobody on this team is selfish," Russell said. "Nobody is seeking the spotlight. It's just playing basketball."

Yes, basketball. With one heck of a spotlight shining down, the game has arrived at SMU.