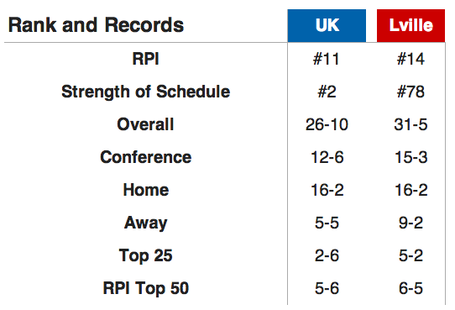 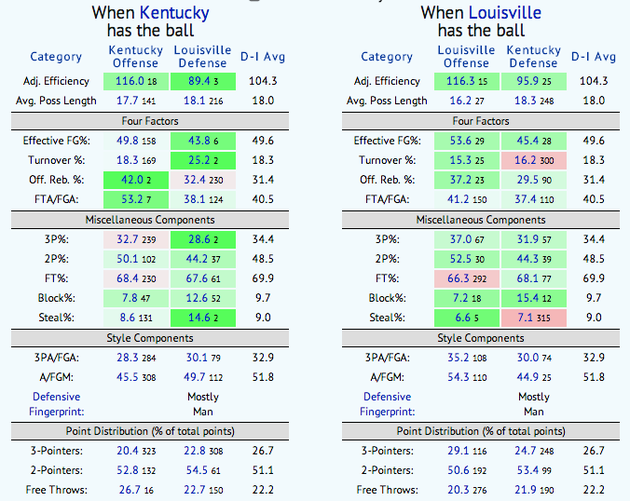 The Wildcats enter Friday night's game playing their best basketball of the season and just five days removed from their most significant victory.

UK's most obvious advantage over Louisville lies in the post, where the Wildcats possess superior size over just about every team in the country. In tournament play alone, the Cats have outrebounded their opponents by 10 and snagged a total of 61 offensive rebounds. This has also helped translate to 45.1 percent shooting from the field.

The Kentucky stars have been at their best over the last two weeks, as all four of UK's leading scorers are also scoring in double-digits during postseason play (which includes the SEC Tournament). Aaron Harrison is leading the way after having reached double figures in all five contests, averaging 17.8 points per game. He has also knocked down a team-high 15 three-pointers during the stretch.

Though they shot just 32 percent from beyond the arc during the regular season, the Wildcats are hitting threes at a 40 percent clip in postseason play, which could be a huge factor against a Louisville team that figures to throw a decent amount of zone their way.

--Louisville is 9-1 all-time in NCAA Tournament games played in Indianapolis, while Kentucky is 3-1.

--Since 2012, Louisville and Kentucky are a combined 20-1 in the NCAA Tournament. The only loss came when the Cats defeated the Cards in the 2012 Final Four.

--Digger Phelps has predicted that Kentucky will defeat Louisville.

--Louisville leads the nation in turnover margin (+6.8) and is 24th in fewest turnovers per game (10.5). U of L has committed 10 or fewer turnovers in 23 of its last 40 games dating back to last year. The Cardinals are generating an average of 22.6 points per game off turnovers.

--Louisville and Kentucky have met five times in NCAA Tournament play, with the Wildcats owning a 3-2 advantage.

--Louisville is 49-8 in NCAA Tournament games where they are the better seed.

--Louisville has never had a team which has won 30 or more games in a season and not make it to at least the Elite 8. Six of the previous seven Cardinal teams to win 30 games have made the Final Four.

--Louisville is 19-0 this season when forcing 17 turnovers or more, while Kentucky is 16-2 when committing 11 turnovers or fewer.

--Kentucky is 21-2 when leading at the half this season, and just 5-8 when trailing at the break.

--Louisville is favored in tonight's game for a program-record 48th straight time. The Cards have not been an underdog since playing at Syracuse on March 2, 2013. All told, U of L has been the favorite in 72 of their last 73 games.

--The Cardinals are 15-0 in their adidas sleeved jerseys, including 14-0 in postseason games.