One last call to get in your game-watch spots for tomorrow night. The "where we're watching post" will be up early tomorrow morning.

During this fight, I've seen a lot of changing. Changing in the way you feel about me, and in the way I feel about yous. In here, there were two guys killing each other...but I guess that's better than twenty million. I guess what I'm trying to say, is that if I can change, and you can change, everybody can change.

One of the biggest keys for Louisville on Friday night is not letting Julius Randle bully them in the post.

You don't get a lot of earth-shattering answers from players or coaches on a day like today, but Jeff Greer attempted to whittle down all of the Q&A fluff into one digestible post.

What has this week been like trying to stay out of the public eye?

CHRIS JONES: It's been good for me. Like I've said, I've been off social media a lot lately. They even put out social media about Coach Keatts' new job, but I didn't even know ... We haven't been hearing a lot of negativity. It was helpful for us.

How much can the previous game matter to you guys? Both teams have changed a lot since December.

CHRIS JONES: It changed a lot. Luke wasn't here with the Achilles, Montrezl wasn't playing Montrezl Basketball, I was just learning ... Russ was Russ, but everyone's clicking right now. It's going to be a way tougher game than it was before. They never played against the Luke that's playing great now, or the Russ who's healthy and ready to play.

MONTREZL HARRELL: Honestly, I feel like that game was a big learning experience for us. It was early in the year. We were still trying to learn who we were. We really didn't play Louisville defense. We had a lot of one-on-one basketball.

After going back and watching the first game from December, the most surprising thing from that day may have been how many wide-open looks Luke Hancock both got and missed. Hancock said today that he and the team have come a long way in the three month since.

Rob Dauster of NBC Sports says Russ Smith has to show up for Louisville to win, and he takes the Cards.

Not sure where this came from, but it's hilarious. 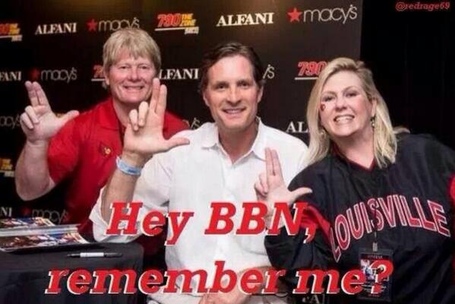 For what it's worth, tomorrow marks the 22nd anniversary of that famous Duke/Kentucky game.

Both Russ Smith and Andrew Harrison say they're good to go for tomorrow night.

Montrezl Harrell is a Doctor of Dunk. That term, which sprang to popularity in the 1970s around Darrell Griffith and his fellow practitioners, is right at home with Harrell. His season total of 94 dunks is the most for any player in any season in school history. The previous record was 59. Several weeks ago, reporters and teammates kind of laughed when he said he'd like to reach 100. He's not far away.

"I've never had a player who, even in practice, wanted to dunk the way he dunks it," Pitino said. "Montrezl, when we're warming up, no defense, he's doing windmill dunking, backward dunking. He does it the first time he's in line. He just wants everyone to know, 'Don't even think about dunking because I'm the best.' He's got a taped wrist. You would think he'd take the day off. He wouldn't even consider it. He wants his teammates to know, 'Get out of my way or you're going to be humiliated.'"

Harrell said his practice habits sprang from discussions with his grandmother, Mamie, who always told him to practice hard. Greenberg said his high school coaches told him that Harrell played harder in practice, even, than in games.

"She gave me that drive and that work ethic," Harrell said. "And my father. My family. I just try to get into practice and work as hard as I can. And lately I've been trying to do that in multiple areas. The harder it is for the defense to stop me, the harder it is for them to stop the team. All the moves coach has given me in the post, and then after practice, just shooting those jump shots from 15 feet and out. I have a decent shot, I just don't have the reps, and the balance, so that's what I'm working on, to get comfortable doing that. I saw what Gorgui (Dieng) gave us when he could make jump shots, and I'm trying to develop that."

I had a dream last night that we were playing Indiana in the Sweet 16 and that Travis Diener (who was playing for the Hoosiers for whatever reason) choked Russ Smith for an extended amount of time and then buried a three without any whistle. I flipped out and then woke up irate.

I haven't been doing much sleeping.

Both sides spent a large chunk of Thursday saying that the rivalry between the Cards and the Cats takes an obvious back seat to the fact that this is a Sweet 16 game.

With Kentucky to face Louisville in the NCAA Tournament, Rockets forward Terrence Jones, formerly of Kentucky, was not concerned about a meeting with Louisville or any potential for kidding from teammate and former Louisville player Francisco Garcia.

So would you say you expect it to be a...stomping, Terrence?

The ACC, which announced earlier this week that it would be moving its basketball tournament to the Barclays Center for 2017 and 218, has now announced that the 2019 tourney will be in Charlotte and the 2020 tourney in Greensboro.

Just did it again.

The Wall Street Journal says if Louisville was a dance it would be the Harlem Shake.

Louisville (4): The Harlem Shake. It sort of starts with star guard Russ Smith doing something incomprehensible all by himself. Then all of a sudden the frame is packed with others dropping threes, throwing down dunks and swimming in confetti. Unfortunately, 2013 may have been the peak year for both.

Kentucky, for the millions wondering, would be twerking.

As he heads into his sophomore season, James Quick says he's trying to emulate former U of L wide receiver Harry Douglas.

Via Jonthan Lintner, this C-J cartoon from 1975 is...unsettling. 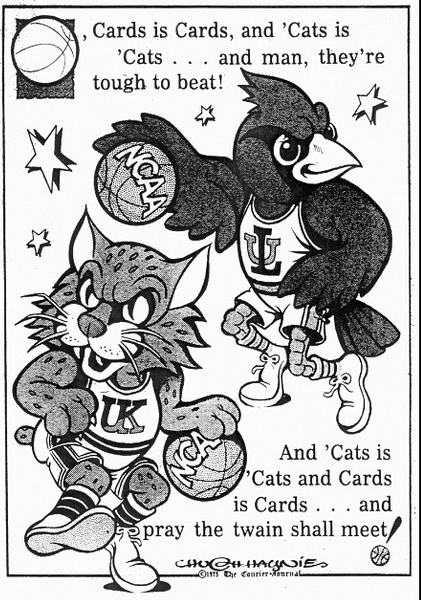 If you didn't know, Gorgui Dieng is the best player in the NBA. Okay, maybe not, but he's on an absolute tear right now.

Care to offer up a game prediction, Gorgs?

Gorgui on Louisville: "I hope we win. I will pray for them." #twolves

Greatest human being ever.

Given how much both sides enjoy talking about Louisville, this shouldn't come as any great surprise. 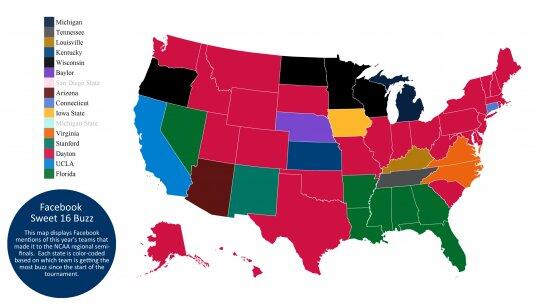 I don't know whose house this is, but it should be mine.

James Young says energy on defense is the biggest key to a Kentucky victory.

Predictably, the AP plays up the youngsters versus veterans angle of tomorrow night.

Andy Hutchins sticks Louisville at No. 5 and Kentucky at No. 6 in his Sweet 16 power rankings.

Pat Forde says Rick Pitino is feeling the ninth-most pressure of any coach in the Sweet 16.

9. Rick Pitino, Louisville. Captured his second national title last year, becoming the first coach to win it all at two different schools. That cemented his legacy at Louisville and guaranteed that the school will name something after him when he's done. But the fans would also like to see him improve his record against John Calipari - it's 1-5 since Cal arrived at Kentucky. Louisville plays Friday in a game fraught with emotional peril for the Cardinals. It's high time for Pitino to prove he can beat Calipari on a neutral court with a comparable team - or a superior team, according to NCAA seeding and Vegas, which has Louisville favored by 4 ½ points.

Cafe Lou Lou is offering free pizza for a year to anyone who can accurately guess the score of tomorrow's game.

The following is the email that UK's president sent to all students today:

What an incredible time to be at the University of Kentucky! Both our men and women are in the Sweet Sixteen! For our students and fans that will be here in Lexington this weekend rooting on the Cats from the comfort of your home or with a group of friends out on the town, I want to remind you to cheer loud and be proud, but to be respectful and courteous to other fans and to our great city.

As the country's greatest fans, I know we will represent the history and tradition of Kentucky basketball with the same dignity and pride as our team. We know you will gather. We know you will celebrate. But remember you are representing the University of Kentucky and let your actions this weekend be reflective of the pride you have for your university.

Please be safe and respectful in your celebrations. Watch out for one another. Keep each other safe. Be smart and careful. Have fun.

We are embarking on a great weekend for Big Blue Nation - let's enjoy the ride.

Best of luck with that.

I don't think Eli was ready. 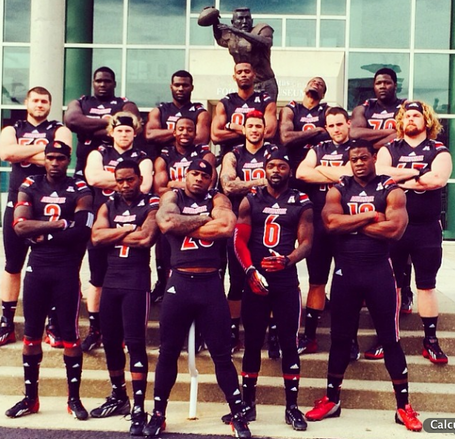 Willie Cauley-Stein says Louisville and Kentucky fans are more alike than they think.

Regardless of who wins, odds are Friday night's game is going to be close.

WHAT DO I DO WITH MY HANDS.

Sorry, this is all just starting to set in a little bit and I'm not handling it well.