The CCBM foresaw this rematch when it celebrated New Year's Eve in Lexington, and went ahead and put a hex on the whole damn city.

The majority of the bets on the game in Vegas are coming in on Kentucky.

The University of Kentucky's basketball team has believers outside the commonwealth since its Round of 32 NCAA Tournament victory over Wichita State.

UK, which opened at 33-1 odds to win the national title by Bovada.LV, is down to 14-1. And as a 4.5-point underdog for Friday's game against the University of Louisville, the Wildcats have 70 percent of incoming wagers made for them to cover.

"We have seen quite a bit of support for Kentucky," said Kevin Bradley, Bovada's sports book manager. "...I'm pretty comfortable letting them bet it and becoming a Louisville fan for that game."

It's been posted on social media about 1,000 times without any attribution, but CardSoHard's chart of Louisville and Kentucky since the expansion of the NCAA Tournament to six rounds is pretty crazy. I'll fully admit to not knowing the two programs' list of accomplishments were so similar.

Dennis Berman, a lifelong Louisville fan who works for the Wall Street Journal, writes about the range of emotions so many of us are feeling right.

This quote could not be more Gorgui.

Gorgui picked UL/UK in bracket:"You need to play with your head, not with anger. It’s not a regular Louisville-Kentucky game, it’s Sweet 16"

ESPN's Myron Medcalf attempts to bounce back from that whole "seeding Louisville 15th" thing from earlier in the week by posting these two bold predictions for the weekend.

1. Louisville over Kentucky by double digits. The Friday matchup between Louisville and Kentucky will be poetic, really. Two of the top three teams in the Associated Press' preseason poll stumbled at times during the regular season. Louisville regained its mojo in the final weeks, but Kentucky fell short of lofty expectations all season. John Calipari's fleet of NBA prospects have since risen in the NCAA tournament. The world-beaters who removed Kansas State and top seed Wichita State from the tourney have looked like they could beat anyone in the field. But the fun will end in Indianapolis. I wasn't impressed by Louisville's opening weekend (wins over Manhattan and Saint Louis), but I believe that the Cardinals recognize they had more to give in both games. And they'll prove it with a double-digit win over Kentucky. More experience. More balance. Rick Pitino's 11-0 record in the Sweet 16. (Calipari is 5-1 against Louisville since arriving at Kentucky, though.) This game won't live up to the hype. Russ Smith & Co. will pressure the young Wildcats for 40 minutes and avenge an earlier loss against Kentucky.

9. The Vols will go down swinging against Louisville in an Elite Eight thriller. Tennessee won't leave Indianapolis quietly. Although the Vols won't have enough to upset Louisville and earn a slot in the Final Four, this will be a tough matchup for Pitino's squad. The Cardinals will need a late comeback to secure their third consecutive trip to the Final Four and a chance to defend their title.

The U of L softball team swept a double header with DePaul today, winning the first game 8-0 and the second 7-3.

I really needed that.

This will be a universally accepted statistic in eight months.

CBS ranks Louisville/Kentucky as the top matchup of the Sweet 16.

1. No. 4 Louisville vs. No. 8 Kentucky (Friday, 9:45 p.m., CBS): Easily the most anticipated regional semifinal. The biggest rivalry in college basketball, Rick Pitino vs. John Calipari - not to mention the last two national champions. Both teams are different than they were in December, and the Harrisons' ability to handle the Louisville pressure will be huge.

Card fans in Atlanta, here's your viewing spot for Friday: 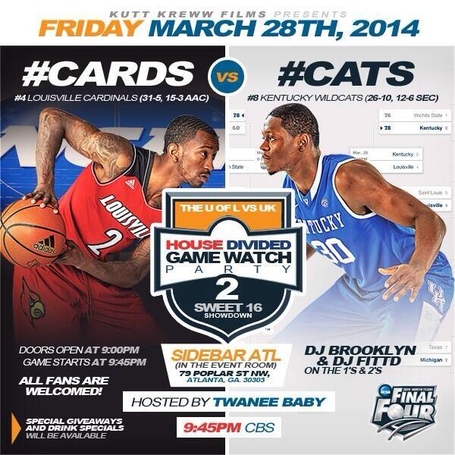 Kentucky congressmen John Yarmuth of Louisville and Andy Barr of Lexington have wagered "locally distilled Kentucky bourbon" on the game Friday, which might be the biggest no-lose bet of all-time.

Kentucky is confident going into the rematch.

Matt Norlander of CBS re-ranks the Sweet 16 by the best musical act from each city. Louisville is No. 7.

Calvin Pryor says he would love to be a Philadelphia Eagle. 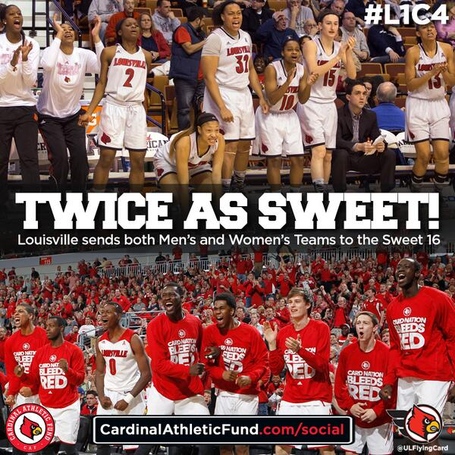 Throughout his senior season, Russ Smith has looked to Peyton Siva and Gorgui Dieng for guidance.

"Russ is a nice person and he is funny, but sometimes it takes more than that to be a leader," Dieng said. "If something is going bad, you need to stand up and say something about it. Russ stands up now. He understands."

Midway through the season, Russ called Dieng about a player who was being left out of team activities. He hated seeing someone left out.

"So he asked me, ‘What can I do to make this guy feel like a part of the team?' " Dieng said. "I just said, ‘Russ, go talk to him on your own. Just make him feel comfortable.' "

So that's what Russ did. They are mostly simple things like that, but sometimes even simplicity needs a guide. And just because Siva and Dieng are no longer in Louisville does not mean they are no longer by Russ Smith's side.

"I tell them what I'm going through, and they talk me through it," Russ said. "They're very wise people."

In what could wind up being enormous news for college athletics, the Chicago district of the National Labor Relations Board ruled on Wednesday that Northwestern football players qualify as employees of the university and can unionize.

Red beer for UofL fans at the Colts Grille in Indy pic.twitter.com/o17JRYe5ky

Kentucky wants to be the one to end Louisville's quest for a "mini-dynasty."

SI's Luke Winn has Louisville at No. 2 in his latest power rankings and says Russ Smith can score on Kentucky in transition if he reverts to his old self.

The matchup I care about most in the Louisville-Kentucky Sweet 16 mega-duel is not Rick Pitino vs. John Calipari. It's Russ Smith vs. the Wildcats' suspect transition defense. Smith was the nation's most dangerous transition ballhandler last season but has dialed back some of that scoring as a senior, and his NCAA tournament fastbreaks have been mostly of the Bad Russ variety.

As you'll see later in these rankings, Kentucky's transition defense is RIPE to get scored on. Can Smith revert to effective attack mode and exploit it?

Louisville/Kentucky is even front page news in Hawaii.

The state of Hawaii knows what's at stake on Friday (photo by @JamesECurry) @CardChronicle pic.twitter.com/N787JDBv7I

It's impossible for me to love the Richard Pitino chair slam GIF any more.

USA Today says Louisville has shown its vulnerability as the demand on Russ Smith has grown.