They're getting ready for the big game abroad, too,

As much as I'd like to be comforted by this, every conversation I've had with the people I know who are really into gambling has included them being pretty blown away by the line. I suppose we'll see soon enough.

A quick reminder that the third-seeded Louisville women's team will be looking to join their male brethren in the Sweet 16 by defeating No. 6 seed Iowa tonight. Tip is set of 9:30 p.m., and you can watch the game on ESPN2.

If you've been fortunate enough to secure tickets for Friday night, here's your pregame spot: 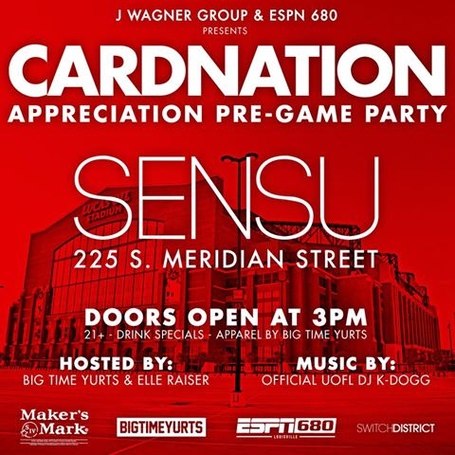 A quick reminder to keep sending me your big game viewing locations for the "where we're watching post" later this week.

It would appear as though the ACC Tournament is officially headed to Brooklyn in 2017, which is news that should be celebrated.

Via ESPN, Friday night's game will be the fourth time that the past two national champions have met in the big dance. The last two times (Syracuse/Maryland in '04 and Arkansas/North Carolina in '95), the most recent national champ has prevailed. I'll fully admit that I have no idea when the other meeting was, and I have no plans to try and look it up.

The Sporting News' Mike DeCourcy ranks the final 16 teams left in the national title hunt, and has Louisville one spot ahead of Kentucky at No. 4.

4. Louisville. The Cardinals' destruction of weak teams led to a lot of pre-tournament enthusiasm about their potential, but they looked a bit limited in their wins over Manhattan and Saint Louis. They obviously need Luke Hancock to shoot well to have success against quality opponents. They also will need better play from rotation players beyond the obvious stars.

Advantage: It's nice to be able to rely on so many terrific talents with championship pedigrees. Hancock and Russ Smith were stars for last season's champions - Hancock in the tournament, Smith all year. Forward Montrezl Harrell contributed to the Cards but also won a World U-19 championship last summer

Disadvantage: Louisville is having enough trouble running halfcourt offense that it's ever more dependent on its pressure D - not just to wear down and annoy opponents, as in past years, but to turn them over and fuel the Cardinals' attack. It's probably more possible to win deep in the tournament that way than it was two decades ago, when players were more experienced, but it's still tough to see Arizona or Florida capitulating.

Adam Himmelsbach of the C-J spoke with Kevin Ware's mother, who says Kevin has no plans to be anywhere other than Louisville next year. 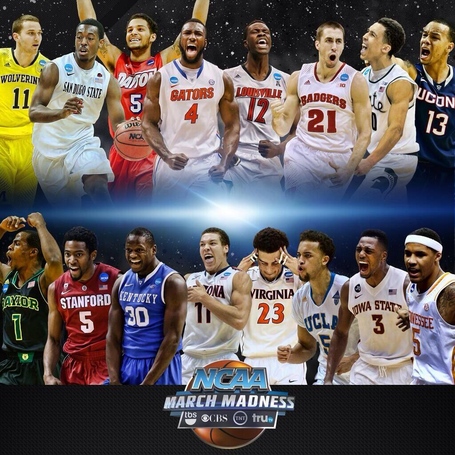 In 1,001 simulations of Friday night's game, WhatIfSports.com had Louisville beating Kentucky 73.2 percent of the time.

The guy who got the "UK 2014 National Champion" tattoo a few weeks back is now hoping to get the last laugh.

"I've had hope that they'd turn it around all year long," Black said. "Obviously they took as long as they could, but right before tournament play I just had this feeling that they were going to get it together and they were going to make this run and just shock the world. So I got the tattoo."

And guess what? The day after he got the ink, Kentucky got hot. The Cats have won four out of five since, their only loss coming by a point to the Gators in the SEC title game, and just ended No. 1 seed Wichita State's undefeated season to reach the NCAA Tournament's Sweet 16 against rival Louisville.

"I feel a whole lot better about it. Anybody watching Kentucky right now knows that they don't want any part of them," Black said. "It was a really surreal moment when they started stepping it up. Even though you have a gut feeling ... it's like a dream come true. It blew my mind and it's really made me happy. The best part is being able to look at people and say, ‘I told you it was going to happen.'

"I went from the crazy idiot, the delusional stupid guy, to, ‘Well, this team is actually playing good.' "

And you're talking good.

In news that should surprise exactly no one, Louisville watched more of the opening week of the NCAA Tournament than any other market in the country. According to CBS and Turner, across all networks - CBS, TNT, TBS and truTV - the Louisville market led the way with a 22.9 rating, well ahead of Dayton (15.), Kansas City (14.3), Raleigh-Durham (13.1) and Memphis (13.0).

The photoshop says "I'm a functioning human with at least some form of a skillset," while the attempted insult says "I'm a failing middle school student who's very angry about a lot of things that happened to me when I was younger."

Find someone to talk to, bros. It's not your fault...maybe.

If you haven't yet heard about the story of Adreian Payne's relationship with "Princess" Lacey, you should change that.

The Louisville men's soccer team opened its five-game spring schedule with a 2-2 draw against professional team Indy Eleven on Saturday night at Cardinal Park. Seniors Nolan Moore and Will Vitalis scored goals for the Cards.

It's a cool idea, Skyline, but it's grossing me out. 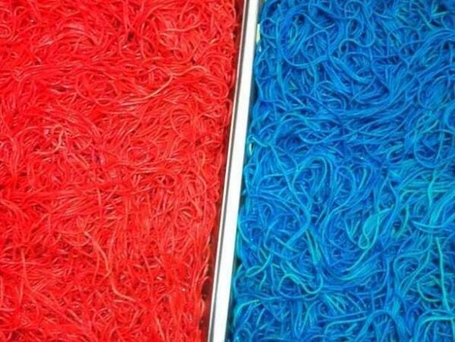 I didn't say I wasn't going to eat it.

Gary Parrish of CBS likes Kentucky to beat Louisville and go on to the Final Four.

Louisville vs. Kentucky: Some scalpers in Indianapolis are about to get paid, and for two reasons. 1) They're holding tickets to a Sweet 16 game between bitter rivals. 2) Those bitter rivals both have campuses less than 200 miles from Indy. This would be a great Final Four game, and we're gonna get it in the Sweet 16. Excellent.

Deion Branch will be holding his annual football camp in Louisville this June.

A look at why defensive-minded coaches like Rick Pitino are obsessed with deflections.

Jeff Borzello of CBS joins the "re-seed the Sweet 16" party and has Louisville fifth.

Jason King does the same thing and goes with Louisville at No. 2.

The Cardinals were a bit underwhelming in victories against Manhattan (71-64) and Saint Louis (19 turnovers). Still, it's tough to doubt a team that has been to two straight Final Fours.

The defending national champions have won 14 of their last 15 games, and all but two of the victories were by double digits. Kentucky, however, will provide a stiffer test than anything Louisville has faced in the past few months. Kentucky defeated Rick Pitino's squad Dec. 28 and played its best game of the season in a round-of-32 win against previously unbeaten Wichita State. Pitino, however, has a career record of 16-0 in the Sweet 16, so you can bet he'll have his team prepared.

According to SquareUp.com, if Dallas wants a Final Four with the best tippers possible, it needs to be rooting for Louisville. 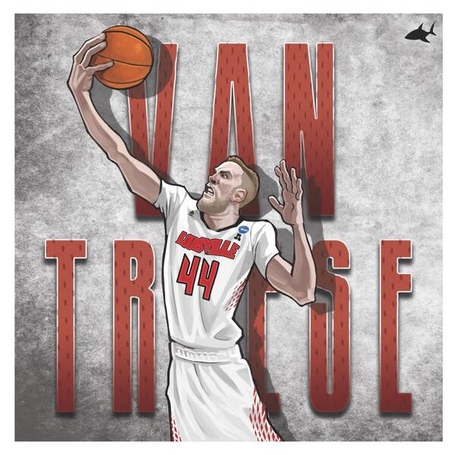 Another beaut from Ian Klarer.

It was reported earlier today by a handful of outlets that Steve Masiello had agreed to become the new head coach at South Florida, but now there's some debate over whether or not that deal has been finalized. USF needs to do whatever it can to make sure this happens, because it seems like a steal to me. I'm very surprised to see Masiello taking (or at least seriously considering) this job when he figures to be in the mix for a higher-profile position if he holds out. USF is certainly a better job than it was when the Bulls were in the Big East, but...it's still USF.

Your daily reminder to vote Russ Smith for the Naismith Award.

Nick Fasulo as SB Nation looks at the storylines that the rest of the country should and shouldn't be writing about this week.

Write about this: Rick Pitino is two wins away from reaching his third consecutive Final Four.
Not that: Rick Pitino used to be the coach of Kentucky.

It feels as though even the national media is over the fact that Pitino was once a really successful coach in Lexington. He's now knee-deep in creating his legacy at Louisville, with a third consecutive Final Four appearance within reach.

If Pitino is able to beat Kentucky and defeat the winner of Michigan/Tennessee, he would become one of only nine coaches in college basketball history to pull off such an accomplishment. Only Ben Howland, Tom Izzo and Coach K have done it since the field expanded to 64+ teams in the mid-80s.

Our coach used to be the head coach at Kentucky? F--k have I been?

Nah I'm just yankin' ya, I'm actually very aware of Rick Pitino's coaching background. Little humor to lighten the mood in the middle of a tense rivalry week. We like to have fun here.

If you hadn't heard, Gorgui Dieng has kinda been going off recently.

And since 1985-86, there have only been 28 20-20 games posted by rookies:Patrick Ewing, Charles Oakley, Greg Anderson, J.R. Reid, David Robinson,Derrick Coleman, Dikembe Mutombo (2), Larry Johnson, Shaquille O'Neal (8),Alonzo Mourning, Shawn Bradley, Chris Webber, Joe Smith (2), Duncan,Maurice Taylor, DeJuan Blair (2) and Dieng. (Not sure which is more surprising about that list-Bradley's presence on it or DeJuan Blair being one of just four guys on the list to have more than one.)

It's probably premature to start penciling Gorgui Dieng in for All-Star Weekend appearances or a spot in Springfield, but in a season that's been pretty sparse for rookie highlights, Dieng's last week or so sticks out.

Chip Patterson of CBS says there's no way the Cards will be as unimpressive in the second weekend of the tournament as they were in the first, and picks Louisville to be the Midwest Region champ.

USA Today has Louisville at No. 6 in its re-seeded Sweet 16, two spots below its Friday opponent. Because USA Today.

Andy Katz of ESPN looks at every team in the Sweet 16's road map to get there.

How they got here: The Cardinals' seed was the most oft-cited complaint directed at the selection committee this season, but folks shouldn't have been so surprised. Yes, Louisville played the best basketball down the stretch of the season, and yes, advanced analytics tell us Rick Pitino's team is one of the best two or three teams in the country. But because the Cardinals' nonconference schedule was weak, and its own league suffered from bottom-half drag, the committee saw a résumé that belied just how devastatingly good Russ Smith and the defending national champions had been for months. Oh well: Nearly 10 percent of the 11 million ESPN Tournament Challenge brackets picked the Cardinals to win the national title anyway.

Key trait: It's hard to pick just one. There is Smith's unmatched ability to create his own shot and find teammates in unforeseeable ways; there is Montrezl Harrell's low-post strength; there is Luke Hancock's calm, timely playmaking, which paid dividends in the Cardinals' first-round scare against Manhattan. But more than anything, Louisville shreds opponents because it presses and harasses out to 30 feet, and sometimes 94. Smith is just as valuable as the lead fixture in a defense that both turns opponents over at a high rate and holds opponents to the fourth-lowest effective field goal percentage in the country -- exactly the style that carried Louisville to a national title last season.

I like this just because it's fun to say "I am the one seed now" in that guy's voice.

No one's hijacking this tourney. I have faith in Louisville and OUR CAPTAINS #L1C4 #CardNation http://t.co/92gJnp4eXX pic.twitter.com/aG89mkDzoE

You're doing it. You just did it.

Pat Forde writes about the "panic" among some in the Louisville fan base over Kentucky potentially ending the Cards' run at a second straight national title.

HOW IS SEIZING AND DEVOURING ANOTHER LIVING THING GOING TO HELP MY TEAM WIN ON FRIDAY!?

I actually understood that he meant making a plea to a higher being for help and hoping that said higher being has a rooting interest in American sports, but that he simply misspelled a key word in his sentence.

Andy Staples of SI discusses what he learned about Louisville and Florida in Orlando.

Here's Yahoo's guide to the Sweet 16.