Regardless of the outcome Friday night, I will wind up in this exact same position (and outfit) on Saturday morning.

By popular demand, we will be running a "where we're watching post" before the game on Friday. If you're hosting or taking part in a game watch party anywhere in the country and want it included on the list, please email me (MikeRuth5@aol.com) your location or post it in the comments.

I enjoy this image. 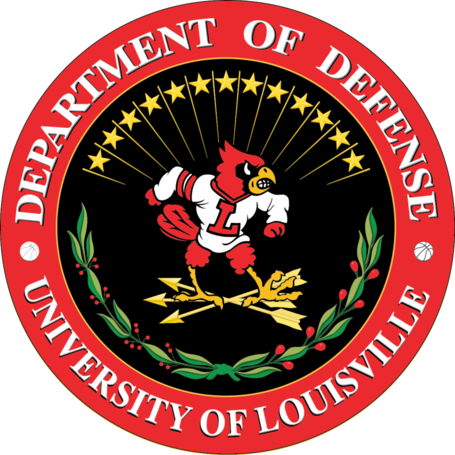 There's not a better week to buy Red V Blue on DVD, which is now a possibility. Card Chronicloids who want to pick up the movie in order to get their minds right for Friday's game can save two bucks by ordering it online. Just go to this website, use the promo code "CCRVB" and you save two dollars on your purchase.

Also, did you know that I'm in it? Pretty sure I save the princess at the end or something.

The Louisville women's team started its journey back to the Final Four with an 88-42 blowout of Idaho on Sunday, and is now a win over Iowa on Tuesday away from coming back home to play the regional semifinals and (hopefully) final in the Yum Center.

The Cardinals and the sixth-seeded Hawkeyes (27-8) will meet Tuesday in the second round in Iowa City for a spot in the Sweet 16. The winner will face LSU or West Virginia in Louisville on Sunday.

The Cardinals are the favorites even though it's a road game. But Iowa is 14-3 at home this season and is clearly more comfortable at Carver-Hawkeye Arena than anywhere else.

And that, my friends, is why the Selection Committee isn't overly concerned with creating the most fair tournament possible.

ESPN's Myron Medcalf re-seeds the Sweet 16 and has Louisville checking in at No. 15.

Manhattan had Louisville on the ropes in the round of 64. The Cardinals secured a 71-64 win and advanced to face Saint Louis, which they defeated 66-51. But the Jaspers shot 45 percent against one of the best defensive units in the country. A major concern? Maybe. The Cardinals were dominant against the Billikens, who went 0-for-15 from beyond the arc. The only question about Louisville is whether its defense -- Manhattan (0.94) and Saint Louis (0.73) were held under a point per possession, according to Ken Pomeroy -- will allow it to create the offense necessary to beat more complete and elite teams down the stretch.

The exercise seeds teams based only on their performance over the opening week of the tournament, which makes more sense than having Louisville at No. 15 in a straight power poll. According to Medcalf, only San Diego State was less impressive in advancing out of the tournament's opening weekend.

There will not be a Louisville/Kentucky story written this week with a better lede than Jeff Greer's.

This is good, quality fan work.

@CardChronicle Delivered a car to a customer at work that is a UK fan. Sent this pic to let him know it was done. pic.twitter.com/kiYcXlL0TJ

I think the Monday after the opening weekend of the NCAA Tournament might be the weirdest day on the sports calendar. By the middle of Sunday you're kind of basketballed out and ready for a break, but when it hits home the next day at around 11 a.m. that no games will be coming on momentarily, you get pretty depressed.

It's a little bit like coming back to school after Winter Break.

If you're in need of appropriate work attire for the week, check out our friends over at Beaux Tied. 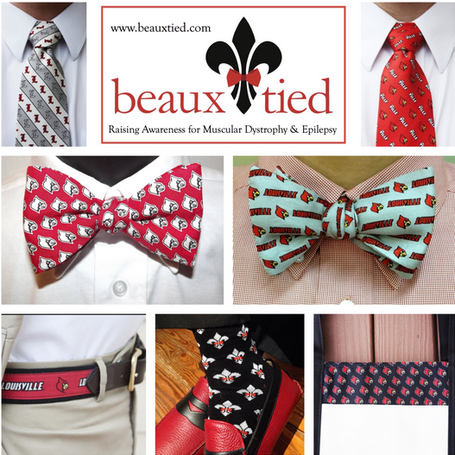 This would be the week to take that plunge.

ESPN's Heather Dinich takes a look at how the Cardinal defense is progressing through the opening week of spring ball.

A UConn fan pens a very eloquent and thoughtful letter of thanks to Louisville.

Aresco was right in everything he said because Louisville gave the league validation. It gave every team in the league a big-time opponent to play in basketball and football. It raised the level of the league.

I can't imagine too many UConn fans being angry at Louisville. Yeah, we wish we had gotten the golden ticket to the ACC but we understand what they were doing - UConn was doing the same thing. Louisville is not Pitt, leading the charge against the ESPN TV contract and then using that as motivation to leave. Louisville is not Boston College, flatly turning its back for more money. Louisville is not Rutgers, moving on to the Big Ten with disdain because it happens to be within an hour's drive of New York City.

What did Rutgers do for the AAC? Nothing, which is about the same that it did for the Big East. The school officials acted like a spoiled brat, silver spoon in mouth, pouting that it had to hang out with poor kids for a year. At one point, they wouldn't even lower itself to putting the American logo on its fields and courts.

Louisville made no such qualms. Louisville understood what happened and treated the league with respect.

We'll miss you guys, too.

James Dickey has resigned as the head coach at Houston.

Transfer Chicken to the Bucket? 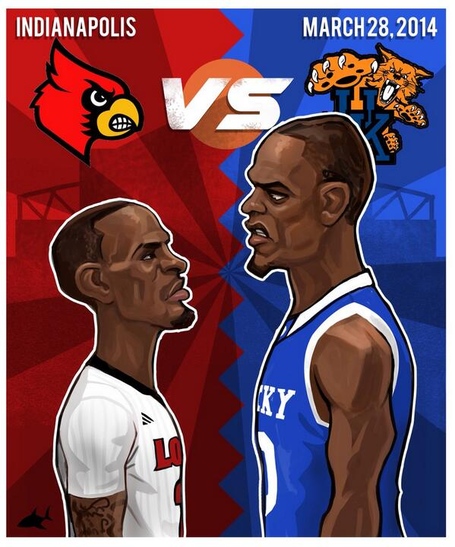 The Louisville baseball team's Tuesday night game against Western Kentucky has been rescheduled for Wednesday due to the weather.

These guys have to be stopped on Friday because this exists.

Temple transfer Anthony Lee is down to Louisville, Indiana, Iowa State, Notre Dame and Ohio State in his search for a new school, according to ESPN's Jeff Goodman. The 6'9 Lee, who has a year of eligible remaining and is eligible to play immediately, averaged 13.6 points and 8.6 rebounds per game this season.

Grantland's behind-the-scenes look at Manhattan's preparation and run at an upset over Louisville is stellar.

He starts going through Louisville's personnel, breaking down their players' strengths and weaknesses. Masiello is already on a first-name basis with most of the guys on Louisville's roster. He has known the Cardinals' best player, Russ Smith, since Smith was in seventh grade. He recruited Smith to Louisville, and when Masiello left for Manhattan, Smith, a New Yorker, almost came with him. He knows this team - both its schemes and its personnel - and hours after learning the Jaspers would play the Cardinals, he shows that he already knows exactly what Louisville intends to do.

Just before he switches from the scouting report to the film, Masiello looks at his players. "They're going to try to punch you in the face," he says. "Well, we're going to throw a haymaker at them. No one's ever done that. We are going to press them the whole night, like nothing they've ever seen. They will hate it. OK? They will be miserable."

After they finish watching film, he returns to his point. "They are very good," he says. "And you know how much respect I have for them. But I'm really not sure if they can take a punch. And we're going to find out."

Your daily reminder to vote Russ Smith for Naismith Award.

Louisville has played in every NCAA Tournament regional final that Indianapolis has hosted. The Cards are 9-1 in tournament games played in Nap Town, with their lone loss coming in that 2009 Elite 8 game against Michigan State. 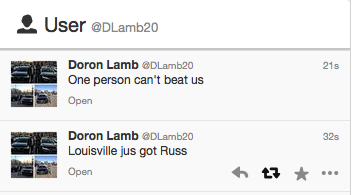 "Distant view tickets" for Friday night's game will be sold starting tomorrow morning at 9 a.m. for $50 per ticket. I'm not sure what constitutes a "distant view" but after seeing some of the "normal views" from inside Lucas Oil Stadium, I don't think I want to pay 50 bucks for it.

An Indiana native says nothing compares to Louisville vs. Kentucky.