Share All sharing options for: Mayor Declares Friday 'Cardinal Red' Day In The City Of Louisville

Louisville Mayor Greg Fischer has declared Friday "Cardinal Red Day" in the city of Louisville, and says he wants the city to break the world record it set two years ago for the most people wearing red in one day. There will also be a basketball game played in Indianapolis that evening.

In his official proclamation, Mayor Fischer urges "all citizens to wear red, businesses to display red in their windows and doors and residents to show red at their homes and in their neighborhoods." 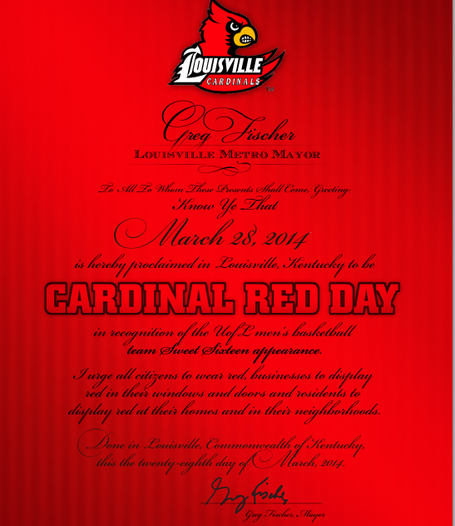 "I want to paint the town red - literally," Fischer said. "This is another great time to be a Louisvillian and to show your support for our hometown team."

Regardless of your politics, you have to appreciate a mayor willing to forget about the politically savvy move and consistently put his support squarely behind the city's team.

If there was ever a week to sport as much red as possible, this is it.