Share All sharing options for: Louisville 66, Saint Louis 51: Cards Headed To The Sweet 16

I'm not sure if it was the 30 point beatdowns at the end of the season or the dominant run to the Final Four a year ago, but somewhere along the line we all got spoiled. Like, Veruca Salt spoiled.

Louisville advanced to the Sweet 16 on Saturday by dealing a five seed which had played Wisconsin, Wichita State, Dayton and VCU its most lopsided loss of the season. I don't care how it happened or what it looked like for extended stretches during the first half, the overriding emotion after a performance like that should be happiness.

Was it perfect? Far from it, and we're going to talk about that today and in the coming days, but I hate the fact that I'm still seeing so many people shrugging off a 15-point win over a good team in the round of 32.

These things -- and I'm talking about more than just yesterday's game, I'm talking about this whole crazy, wonderful run that Louisville basketball has been on -- aren't guaranteed. From 1998 to 2004, U of L won a grand total of one NCAA Tournament game. That's seven years with less wins in the big dance than we just experienced over the past three days.

Part of being a fan is talking about where your team can improve and criticizing some things that occur during a game, I get that and I do it just as much as anyone, but if you're overall state of fandom is more negative than positive at this moment (a statement which I think applies to very few people), then I don't know what to tell you.

These are the good times. Soak them up as much as you can.

I believe Rick Pitino has a winning record in NCAA Tournament games played in the round commonly referred to as the "Sweet 16." I will be performing some additional research on the website www.Google.com later this evening to try and confirm.

Via ESPN, this is the first time since 1984 that Louisville has advanced to the Sweet 16 in back-to-back-to-back seasons. Again, good times.

We talked about it a little bit after the Manhattan win, but something just seemed to be up, for lack of a better word, with this team in Orlando. Pitino seemed aware of it, and multiple times during the first half he encouraged the bench to get lively and into the game.

Russ' struggles during the game were well documented, but the stranger thing was that he almost looked sad for most of the day. Afterward he said he was just tired and looking forward to getting a couple of days of rest.

Russ finished with seven turnovers, but also had seven assists. He was much better after Pitino apparently explained to him that he was the guy that other teams in the tournament were going to do anything to stop. He framed the message by relating it to Pitino's own gameplans where he puts enormous emphasis on stopping a certain player, and then told Russ that he is that same player for other teams. Apparently the message was finally received and Russ adopted a pass-first mentality during the biggest stretch of the game.

I'm not entirely sure what the deal was with everyone's demeanor, but I'm choosing to blame it on Orlando. Get two wins, get the hell out of that city, come back to Louisville, regroup and take your best shot at the Final Four. That's the gameplan.

Apparently the lack of excitement in the locker room after the game was something recognized by every member of the media who was in the building.

A few quotes on the situation:

From Trez: "We're not in Dallas. What is there to celebrate?"

From Russ: "We don't celebrate Sweet Sixteens in this program."

From Luke: "It's kind of a weird locker room right now. But I think everybody's excited. We're ready to go onto our next game. This isn't our goal. We're happy to be here and blessed to be here, but this isn't our end-all. We have bigger goals. We want to keep winning games."

If you say you haven't had both that Killers song that they're using as the theme of the tournament and "Higher Love" by Steve Winwood stuck in your head for a solid chunk of the last two days then you are straight lying to my face and I'm pretty upset about it. 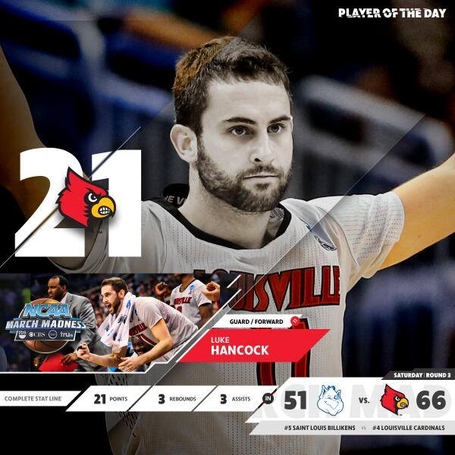 He's still not in that same 2013 March rhythm with his outside shot, but Louisville probably doesn't win either of its first two NCAA Tournament games without him.

Also, never elbow or smack that man in the face. It will only bring bad things for you.

Speaking of coming up big, I'm going to open a kick-starter campaign to raise the funds for a Stephan Van Treese ride at Disney World. The ride will involve tapping a ball to a family member or trip-mate...also water and extreme drops. I'm thinking "Sleeved Steve's Extreme Adventure" for the title but I'm not l'm love with it. It's gonna be a great ride.

Seriously though, SVT came up huge in the biggest of spots, finishing with eight rebounds and a pair of blocks...and the token missed lay-up...which, again, is something we all have to live with in the same way that we lived with the one Gorgui goaltend per game. But only one. After that, bitching is allowed.

I'm being dead serious when I say this: we would have no shot at the Final Four without Stephan Van Treese.

Could not be more on the Tournament Wayne bandwagon right now. I mean, he's finishing around the rim, he's hitting tough jumpers in the lane, he's making aggressive and successful drives to the basket (including ones where he's robbed of two free-throws) and he's making extra passes to open shooters.

It's hard to imagine CBS not sending its A Team to Lucas Oil Stadium, which is comforting because Anderson and Bonner were just dreadful.

Still can't get enough of this Mangok GIF.

It's legitimately a loose ball that he just needs to grab, and instead he chooses to volleyball spikes it straight into the ground. Just trying to make a statement.

I was also a huge fan of the Mangok alley-oop, which was very Trez-like -- the biggest compliment you can pay another human being. It also led to a moment of panic by a viewer at CC Headquarters who unleashed a high-pitched "no, that's not Trezzzzz" as the pass was being thrown because he though Luke didn't realize who the guy running the floor with him was.

Chris Jones wasn't as rock solid as he was on Thursday, but he was awfully close. Outside of continuing to try the off-balanced floater that he's making at about 4 percent clip right now, he's doing everything this team needs him to do.

Jones said after the game that his focus has "gone to another level" since the passing of his step-brother and that he's totally changed his approach to the game in the last couple of weeks. His story is becoming the best of the postseason.

A few fan shoutouts from the weekend.

Hero. RT @cliffysmalls MAYBE I LEFT MINE IN LOUISVILLE AND MAYBE I HAD ONE OVERNIGHTED TO THE HOTEL. MAYBE. pic.twitter.com/lRQY6x0zlb

I thought Saturday was a bit of a step back in the evolution of Trez's passing game. There were four separate occasions where he was double or triple teamed in the post and all he had to do was make a simple pass out for an open shot. Twice he forced a shot up and missed, once he traveled and once he got a (dubious) foul call. I get that he was frustrated about not getting enough touches when Louisville was struggling to score early on, but he can't let stuff like that affect him in a way that leads to other aspects of his game slipping.

There was obviously something Terry Rozier did which rubbed Pitino the wrong way because he sat for a long time after his first stint on the court and wound up playing only 11 minutes, but I thought he did some great things during the time he was out there. You have to hope Terry isn't overly discouraged by his first taste of the tournament, because there's no doubt he'll have to play a huge role in any major success this team has going forward.

I don't want to see that tape on Russ Smith's thumb ever again. He was approximately one thousand percent (math) better after ripping it off.

How do you make the decision to go with hair like Jordair Jett's? I feel like it has to be something that just sort of happens, because you're not going to break down the thousands of potential hairstyles that exist and settle on whatever that is. I don't care how eccentric you are, you're just not.

Five days of happiness before the unreal emotion that will accompany Friday's game, regardless of who the opponent is. Nothing compares to this time of the year.

Two down, four to go.