Share All sharing options for: Louisville 71, Manhattan 64: Cards March On After Major Scare

We all, or at least most of us, try our best not to look ahead during this time of the year. Regardless of who the next opponent is, we say things like "if we play Saturday" and "that would be a touch matchup" so as not to anger the gods of March Madness.

Controlling your subconscious is a bit more difficult.

With Louisville trailing by three at the final TV timeout of the second half, I walked upstairs and faced the thought of the season ending for the first time. It was the same kind of feeling I got immediately after the Cleanthony Early three-pointer that put Wichita State up 13 in the Final Four. I never assumed victory over the Shockers, but that moment made me realize just how confident I'd been heading into the game, and just how much more that was going to make the loss sting.

It's a brutal moment whenever it happens, and the things you think about are always the same. I'm not even going to watch anymore basketball. It's so long until we get this chance again. What the hell am I going to do tomorrow?

As was the case a year ago in Atlanta, we were all spared the pain of having to actually address these thoughts and questions thanks to the heroics of a couple of guys in white sleeved addias jerseys. You're all aware of the details, so let's just end the intro with this: seniors step up in March, and that's exactly what Russ Smith and Luke Hancock did.

I made the comment about halfway through the second half that the game reminded me of Louisville's first round nailbiter against Louisiana-Lafayette back in 2005. Some folks countered that it reminded them of the Morehead State game, but I never got that vibe.

U of L was awful in the loss to Morehead, and the Eagles were just good enough to put themselves in a position to hit a shot in the final seconds that made the difference (also, Preston injury, etc.). While the Cards by no means played their best game Thursday night, I thought Manhattan was tremendous in the same way that Lafayette was nine years ago (Jesus, nine years ago?).

I am by no means a coach, scout or expert, but as someone who watches a great deal of basketball, it certainly appeared as though Steve Masiello gave one of the better coaching performances of the season on Thursday. For people like us who watch Louisville religiously, the Jaspers did everything that you don't want to see an opponent do against the Cards. They knew where to trap, they knew which way to force both our guards and our big guys, they pressured players like Stephan Van Treese instead of sagging off because he's a non-shooter, and they took full advantage of the fact that we have a backcourt incapable of throwing over the top of pressure. They brought three (sometimes four guys) up to midcourt and dared us to attack the basket and make plays after breaking their pressure. For about 37 minutes, we didn't.

It was a masterful job, and it made me wish I could have watched them do their thing against another four seed. 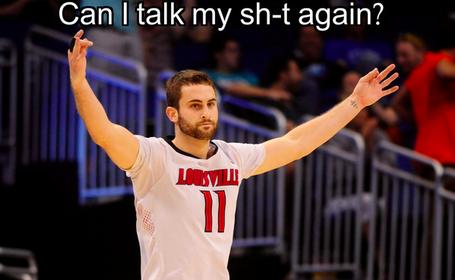 Also, his postgame interview is worth watching if only for the very end.

As much praise as Luke and Russ and even Wayne have received, I thought this was Chris Jones' best game of the season.

It was pretty clear that Masiello's gameplan included not just trying to force Jones to beat them, but also to try and get in his head. On Louisville's third possession, RaShawn Stores was basically smacking Chris for about five seconds before finally being called for a foul. It was pretty clearly an intentional move to try and get in the head of one of U of L's more emotional players, and it didn't work.

With Russ not being Russ, Louisville needed a rock in the backcourt, and Jones was that guy. He broke the Manhattan pressure trip after trip, he played within himself, he hit all six of his free-throw attempts and he turned the ball over 0 times. All that more than counteracted the fact that he was just 2-for-11 from the field.

On one the biggest possessions of the game, with Louisville trailing 60-58 and less than three minutes to play, Manhattan wanted Jones to have the ball in his hands. They denied Russ and overplayed Jones so badly to the right that he had no choice but to go left, and straight into the Jaspers' big man. This was where Masiello hoped Chris would either get trapped or try that little floater that had not been working for him all night. Instead, he used the tiny amount of space that the defenders gave to him to drop a gorgeous bounce pass to Wayne Blackshear, who made a terrific finish and tied the game.

It was a play that I am extremely confident Chris doesn't make a month ago, and pretty confident that he doesn't make two weeks ago. A few more made shots would have been nice, but this was the performance that Louisville had to have from its point guard in order to not be one and done.

The relief of the season not being over has made everyone act very positive this morning, but I think we still need to address the weird vibe that was present last night. I don't know if it was the late start, or being frustrated by Manhattan's style or what, but that was the least amount of enthusiasm we've seen from a Louisville team in I don't know how long.

Russ looked perpetually upset, Trez wasn't acting like Trez, the bench wasn't as into things as they usually are; it was just a really bizarre night. You have to hope it was just one of those weird first round things that tend to exist as an outlier when you look back on the tournament as a whole.

Hancock is a baller. Clutch. #MarchMadness

Things that happened at CC Headquarters to secure the victory: I took my jacket off after the final TV timeout, there was a key seat switch and someone held coasters in their right hand for the final three minutes. You're all welcome.

Two rumors that come up every single basketball season with regards to both Louisville and Kentucky: 1) When there are midseason struggles, it's because one player impregnated another player's girlfriend. 2) When a key player has a bad game in the tournament, it's because he took money to throw the game.

It's been true since I was 12-years-old and it's hilarious that it hasn't changed.

I hope Anderson and Bonner are spending these 24 hours figuring out who Chris Jones is and who Terry Rozier is because, contrary to what you might believer after watching last night's broadcast, they are not the same person.

He stepped up when he had to, but obviously we can't afford another un-Russ performance from Russ going forward. He made poor decisions with the ball, he didn't shoot it particularly well and he committed an unforgivable fourth foul at a time when the game was totally up in the air.

The free-throw shimmy can stay, though.

Of course, the one awful thing that Stephan has done over the past month got slo-mo replayed about 17 times. I think he actually threw that shot down at the rim. You're not going to shoot a high percentage when that's the case.

Sleeved Steve is still the best Steve though.

I have slept a combined four and-a-half hours in the past two days. It's okay though because I'm counteracting that with the starburst jelly beans I use as my nervous snack during every NCAA Tournament. Beacon of health.

Couldn't have been happier to see Wayne make key plays in a big, close game at crunch time. That's a big deal for the next couple of weeks.

I blame all of this on Pitino not calling Manhattan "the toughest first round opponent" he's ever faced in the days leading up to the game. I do think that he was being dead serious after the game when he talked about the team needing something like this. The Cards stared the end of their season dead in the face and they responded. You don't have to have something like that if you're going to make a run to the Final Four or win a national championship (last year's team didn't), but I do think it comes in great handy when you're faced with the same situation again. And given the strength of the Midwest Region, I'd say that scenario is more likely than not.

Is there anything like a big win in the tournament? I mean seriously. I was way too excited to get any reasonable amount of sleep last night, and I'm still all jacked up and smiling 12 hours later. And the best part about this, as always, is that we get to enjoy an entire day of basketball knowing that we're still right in the thick of things.

Exhale. Also, try to get a couple extra hours of sleep tonight.