While March Madness is on the minds of most Cardinal fans this time of year, let's not forget that spring football has officially kicked off as well. Since Mr. Rutherford has enough on his plate as is, I thought I'd give everyone an update on what's going on in the world of Louisville football.

UofL's official athletic site has a generic synopsis of the first and second day of spring practice. You can read them here and here. The biggest talking points so far have been the fast-paced, no-nonsense attitude of Petrino's practices and the battle shaping up between Bolin and Gardner at the QB spot.

Heather Dinch, who covers ACC football for ESPN, talks about why Louisville will competitive in the ACC.

Head Coach Bobby Petrino was on the Drew Deener Show this morning to discuss why he likes having spring ball open, what he wants to get out of the spring practice season, the question at the QB position, . You can (and should) listen to the podcast here.

For those of you wondering about Uhl train and Dyer Wolf (that is what I call them)... 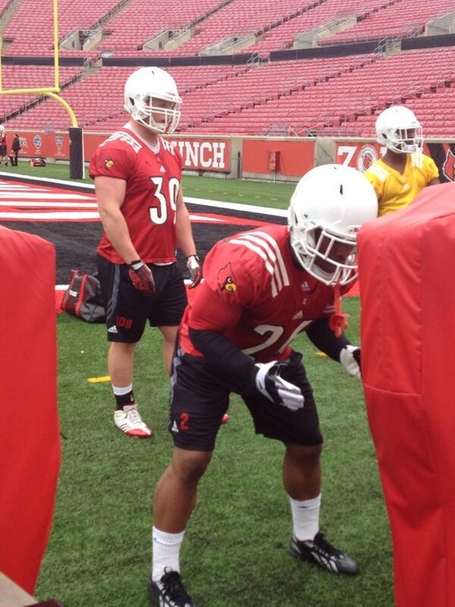 If you haven't seen the videos from training week, here they are. Point of emphasis: Griffin Uhl is a monstrous human being.

Speaking of football videos, InsidetheVille uploaded a highlight video from the first day of practice. It was in the Wednesday News and Notes as well so you might have already seen it.

SI: A lot of people were surprised to see you jump from an SEC program like Georgia to Louisville. What led you to the Cardinals?

TG: I’d known coach Petrino when he was here before and was very successful. I knew of his track record both here and Arkansas. I also got to know him a little bit when he was with the Atlanta Falcons and then in the SEC as well. I’d kind of known his offense and what he’s about. When he approached me about the opportunity here, I took into play that, number one, he’s a proven head coach. And he really kind of started that here [at Louisville] back before he left; he’d won here before, so my expectation was that we can win again, only more. So I knew he was a proven winner. Then offensively, he’s one of the best in the business, as far as play-calling and putting points on the board. So the combination of that, along with where this program can go now that it’s in the ACC, was something that excited me. We talked about it for a couple of days, and I ended up deciding to do it.

Registration for the Bobby Petrino Football Camps is currently open.

For those of you who were planning on cutting out of work early today to check out the practice, be aware of the time change.

Friday's practice time has been changed to 3:20 pm. The location has yet to be determined #ACCards

Saturday's practice will begin at 10:00 a.m. The location has yet to be determined, but odds are it will be in the stadium or at Trager. Another thing to note is that Saturday's practice is slate to be a half-practice, half-scrimmage. So if you are looking for something to do Saturday before our game against Saint Louis, head out and support the football cards.

Hey CardNation practice is open come take a look at your 2014-15 cardinals. 4pm in PJCS!

Last but not least, I just want to remind everyone that all spring practices are free and open to the public. Practices are scheduled to run every Tuesday, Wednesday, Friday and Saturday until the annual U of L Spring Game on Friday, April 11. 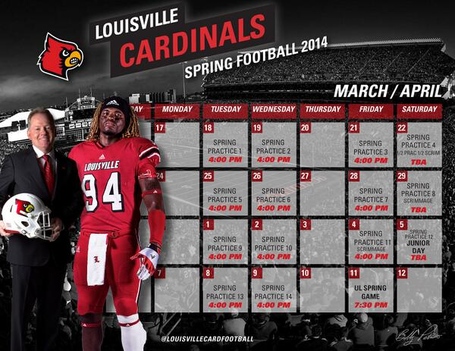