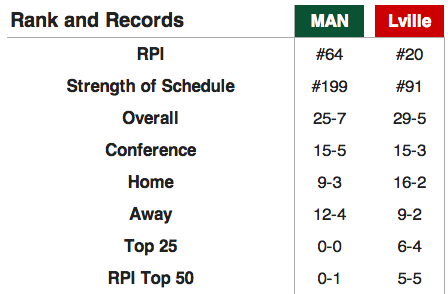 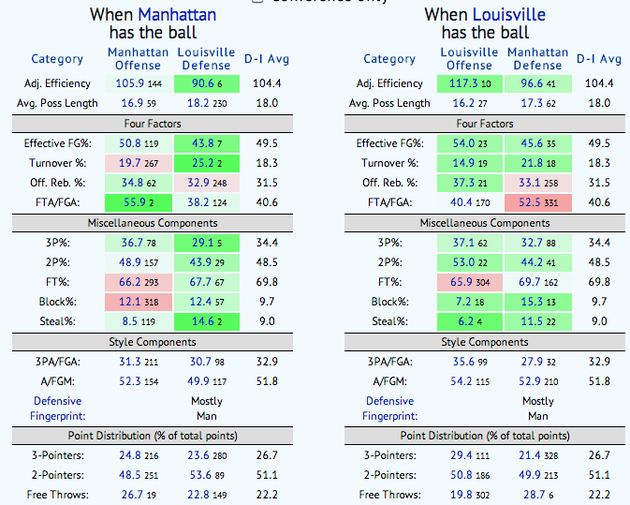 Masiello is a Pitino protege, so it should come as little surprise that Manhattan's style is eerily similar to Louisville's. The Jaspers like to get up-and-down, press and score in transition. They force opponents to turn the ball over on 21.8 percent of possessions, the 18th best average in the country.The problem is Manhattan turns the ball over at nearly an identical rate, 19.7 percent, good for 266th in the country. Basically, you should expect Russ Smith to become Louisville's all-time steals leader (he's currently tied with Peyton Siva) by the end of the night.

Manhattan gets to the line a lot, but they only shoot 66.2 percent as a team there. They also attempt a decent amount of shots from beyond the arc, but Shane Richards (42.7 percent) is the only elite shooter on their roster.

--Manhattan's 25 wins this season are the most for the program  since the 1994-95 season, when the Jaspers advanced to  the NCAA Tournament's round of 32 as an at-large #13 seed under former head coach Fran Fraschilla.

--A 13 seed has defeated a 4 seed in each of the past six NCAA Tournaments.

--Manhattan is 3-7 all-time in the NCAA Tournament.

--A victory will give Louisville its eighth 30-win season in program history.

--Louisville is currently the No. 1 overall team in Ken Pomeroy's rankings. Eight of the last nine national champions were ranked No. 1 in Pomeroy's final rankings.

--Louisville is 47-8 in the NCAA Tournament when they are the better seed.

--Manhattan is 11-0 this season when recording 10 steals or more.

--Montrezl Harrell, who already holds the U of L record for dunks in a season, needs to just nine more to hit 100 for this year.

--Louisville is favored in tonight's game for a program-record 46th straight time. The Cards have not been an underdog since playing at Syracuse on March 2, 2013. All told, U of L has been the favorite in 70 of their last 71 games.

--The Cardinals are 12-0 in their adidas sleeved jerseys.