For the second consecutive season, the President of the United States has the Louisville Cardinals falling in the national championship game of his NCAA Tournament bracket. A year ago that worked out pretty well.

President Obama had the Cards falling to Indiana last season, and this year he foresees another Big Ten team, Michigan State, doing the job. 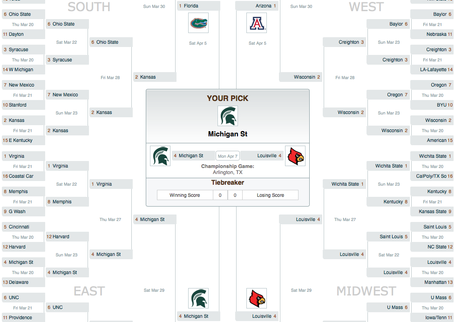 This is actually the third time President Obama has picked Louisville to fall in the national title game. In 2009, when the Cardinals were also the No. 1 overall seed in the tournament, Obama predicted that they would be beaten by North Carolina in the championship. The Tar Heels did go on to cut down the nets, but U of L fell earlier in the Elite 8 to...Michigan State.

The president also has the Cardinals advancing to the Final Four on the women's side, where his national championship pick has yet to be revealed.