That's Jameson showcasing the way pretty much all of us feel on the night before the madness takes complete control of everything in our lives once again.

If you have time to read just one thing today, let it be this Grantland feature on re-watching the 2013 national championship game with Luke Hancock and Spike Albrecht.

It's lengthy, but well worth it. Here are a few highlights:

Hancock has only two points at this point. "I was in shock a little bit," he says. "I was thinking, I can't believe we're down like this. And with the way they shoot the ball, it's going to be really hard to come back. We have to gamble more on defense. That's the only way to come back. But if you gamble and miss against a team like this, they can blow you out." Hancock drew the foul that sent Burke to the bench, but otherwise, he had barely been a factor in the game. Yet with leading scorer Russ Smith struggling, Hancock has been slotted into Smith's spot at the 2. "Look at me," he says, pointing to himself shrugging on the screen. "I'm telling Coach that I literally have no idea what I'm supposed to do here. When I was at the 2, I didn't know a lot of the plays."

But that's OK. Over the next few minutes, Hancock won't need set plays. He settles things down on a drive that draws a foul. Two free throws, both good, now 33-23. He's just getting started.

That is the Michigan locker room. Beilein allows a CBS camera crew to film his halftime speech. He is projecting confidence, sounding upbeat. All around him, the players are clapping, some yelling, Let's go! But, says, Hancock: "That looks nothing like our locker room looked right then. We were all screaming, jumping up and down. We were so fired up. At that moment, there was no doubt in anyone's mind: We were going to win that game. You look at them, and it's just not the same. They look shell-shocked."

But in this moment, Hancock watches himself hug Wayne Blackshear. He thinks back on that night, he and Siva sitting in their hotel room, watching the highlights on repeat. He tries, as best as he can, to describe his emotions then: "It was just so much joy. Indescribable joy. It wasn't, ‘Yeah, Michigan! We beat you!' It was just, ‘Oh man, we won.'"

The whole thing is tremendous.

Congratulations to Louisville signee Quentin Snider, who has been named Kentucky's Mr. Basketball for 2014. We linked up Quentin's senior year highlights yesterday.

Legitimately smiled the entire way through this:

Obviously you should have already joined the CC pool (which is now pushing 1,000 members), but if you're looking for another to join, the folks from Rush the Court are offering up an autographed 1986 championship ball and a pair of Final Four tickets (I'm assuming 2015) as the prize for their pool.

A look at the postseason media guide cover:

PredictionMachine.com ran 50,000 simulations of the NCAA Tournament, and Florida was its most consistent champion.

Region placement does not seem to be of great importance to the committee this year, and to fan bases eager to see their team play this is great news. However, there can be some unforeseen consequences. Louisville (#2 in our ranking) won the AAC Tournament, yet was given just a four seed to help keep the Cardinals near home. As a result, the Cardinals were granted seeding in the Midwest region, which plays the Regional Finals in Indianapolis. While Indianapolis is closer to Louisville's fan base, the Cardinals face what looks like the most difficult region. There are a record 19 teams in the Midwest, 12 of which rank in our top 40 and six of which rank in our final top 20. Though no Midwest team wins more than 8.8% of the time, the region as a whole wins it all a bracket-high 31.1%.

Arizona is the weakest one seed. While the resume is strong, the team has been hurt by a key injury to third-leading scorer and strong defender Brandon Ashley. The Wildcats are #7 in our rankings, 38th in offensive efficiency and first in defensive efficiency. The Wildcats find themselves in the South region, the least likely region from which the National Champion will come at just 19.8%. Arizona only wins the title 3.9% of the time. Creighton, an ultra-efficient three seed led by the nation's top player, Doug McDermott, wins it all more often at 5.9% of the time. The Bluejays are the most likely Final Four participant from the West, yet they only even get there 19.7% of the time. The West region is up-for-grabs and relatively mediocre (especially relative to the Midwest on the same side of the bracket).

Prediction Machine had Indiana as the most likely champion a year ago.

As they did with the Super Bowl, Wilson put together a small batch of minimalist graphics commemorating big moments in recent tourneys. While the four other ones I saw are pretty cool, I must admit to being underwhelmed by the "draining threes" graphic dedicated to Louisville's 2013 run. 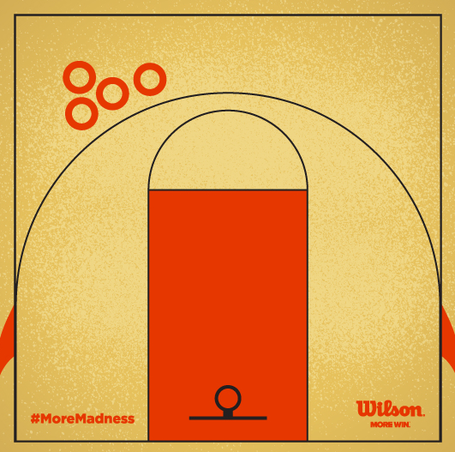 Maybe I'm just not getting it.

(Update: Okay, I get it now that this is representing Luke's four threes in the title game and I change my stance 100 percent. This is very cool. I haven't been sleeping much this week.)

The Falcoholic takes a look at Calvin Pryor.