Cheri Brown and granddaughter Kierstin Bandy brought home a win over Connecticut on Senior Day, and now they're focused on bigger things...like whether the finale of Seinfeld gets too much flack...and beating Manhattan.

Two Louisville basketball coaches received seeds from the NCAA Tournament Selection Committee this week. Neither one is especially pleased with the job the committee did.

The Cardinals were seeded third in a regional that will wind its way to the KFC Yum! Center for rounds three and four. Walz had the body language of a coach whistled for a technical foul he had not earned.

"I was just hoping to make the tournament," Walz said. "I mean, you know, with four losses and three of them to UConn, I figured we might be an NIT team."

Insert the laugh track here. Except Walz, whose team is 30-4 and ranked fourth nationally, was not laughing.

You could also see it on the faces of Walz's players. Several jaws dropped when the news flashed on the video board at the KFC Yum! Center Monday night that Louisville was a three seed that would likely have to beat another team on its homecourt to get back home.

"It's not necessarily the best to get a three seed, but we'll take it," said Shoni Schimmel, the team's all-American guard.

If you haven't already seen it, there is a Groupon available for cheap tickets to the Midwest Regional semis and final at Lucas Oil Stadium. You've got two days left to gobble those bad boys up.

A couple of the relevant NCAA Tournament prop bets from Bovada:

What seed will the 2014 NCAA Men's Basketball Champion be?

Which Conference will the 2014 NCAA Men's Basketball Champion come from?

Will there be a repeat final of 2013 Michigan vs. Louisville in the 2014 NCAA Men's Basketball Championship?

Louisville - Will they make the Sweet 16 in the 2014 NCAA Men's Basketball Championship?

Apparently Yahoo has changed their settings so that there is no longer a cap on the number of people per bracket group, so there will be just one Card Chronicle group this year. You still have a day left to join the fun and potentially win some cool stuff.

A formula that has correctly predicted 20 out of 26 NCAA Tournament upsets over the past three years says Saint Louis, UMass and Creighton are the teams most likely to bite it in their opening game this season.

A very cool graphic from SB Nation's The Daily Gopher (Minnesota) that breaks down advanced statistics and showcased just how tough the Midwest Region is.

The full bracket predictions from Nate Silver's FiveThirtyEightSports have Louisville as the team in the field of 68 most likely to win the national title, but give the Cards only a 15 percent chance of doing so.

Obviously this was originally made for a trip out West, but I still enjoy it. 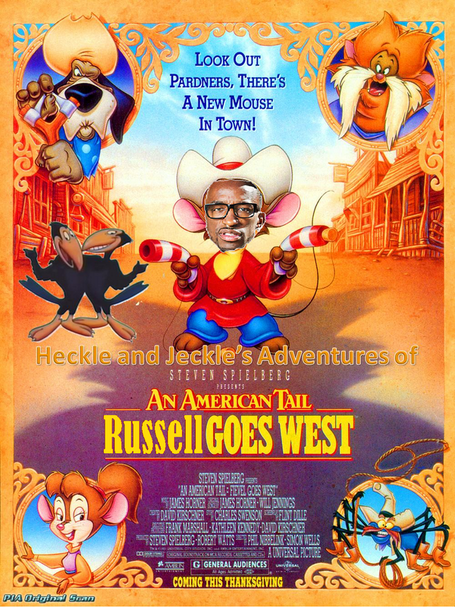 Rick Pitino checks in at No. 3 on Jeff Goodman's list of the top 25 coaches in the NCAA Tournament.

Pitino and the Cardinals won it all last season and have a chance to repeat even after losing Peyton Siva, Gorgui Dieng and Chane Behanan. But Pitino's most impressive job was getting Louisville to the Final Four two seasons ago with an unheralded, unproven bunch.

I'd say he's somewhere around two spots too low.

A travel writer lists the 15 best places to live in Kentucky, and four of them are Louisville.

Ian Klarer is in March form. 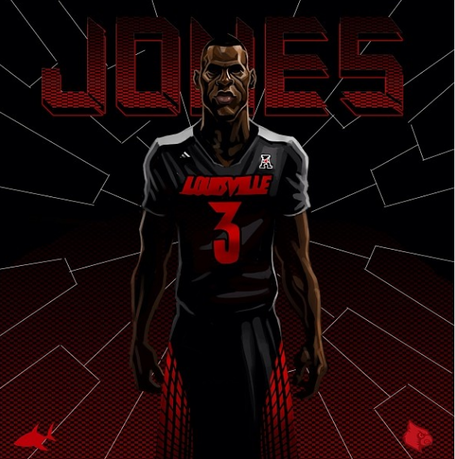 It's already up on the front page, but the Chasing Cinderella feature on Manhattan is very cool. Of course it will be a lot less cool if they, you know, win a game in the tournament.

For those who had been wondering, Michael Dyer did participate in Louisville's first spring practice today.

Preston Brown will work out for the Falcons on Wednesday.

Basketball predictions likes Louisville to make it out of the Midwest Region by beating Duke in the Elite 8 again, and then picks the Cards to win it all by beating Florida.

Pat Forde tackles the best and worst case scenarios for Louisville this March.

Best Case: On a roll and fighting mad over lousy seeding, the Cardinals come out blazing. They maul former assistant coach Steve Masiello and Manhattan, then do the same to unraveling Saint Louis. Russ Smith averages 25 points and four no-look passes per game in those two victories. Then it's the Atlanta 2013 Nostalgia Tour in Indianapolis. In a Final Four rematch with Wichita State, Tim Henderson hits a pair of 3-pointers to key a Louisville victory. And in a 2013 national title rematch with Michigan, Luke Hancock again shoots down the Wolverines. In the same city where Louisville won the '86 title, the Cardinals get past Arizona in the semifinals behind a monster game from Montrezl Harrell, and win it all over Michigan State on a Russdiculous one-on-five driving scoop shot. Pitino gets huge tattoo of Russ' winning shot on his chest. Harrell decides he likes this dynasty thing and declines to enter the NBA draft. Kentucky fans, homebound and surly since their team was bounced by Kansas State, go back to reading the 2014 recruiting rankings and remind themselves that draft day is the biggest day of the year.

Worst Case: Trapped in a close game against a coach who knows them well, the Cardinals unravel in the opener against Manhattan. They blow a six-point lead in the final four minutes, missing five free throws, committing four turnovers and fouling the Jaspers repeatedly down the stretch. Still, Wayne Blackshear has a shot to tie at the buzzer but misses by a foot. Smith shoots 4-for-21. Harrell goes pro, and inexplicably so do guards Chris Jones and Terry Rozier. Pitino blames the mass exodus on social media and promptly retires. Convinced that their seeding was affected by league affiliation, Louisville fans burn anything that has the words "American Athletic Conference" on it. Meanwhile, Kentucky wins another national title and the top five kids in the class of 2016 all commit to John Calipari.

A new Peyton Siva video from the Detroit Pistons in which Peyton talks about learning from other point guards and bonding with his younger teammates.

ESPN's Myron Medcalf breaks down the top contenders for the national title, a group which includes the team this website chooses to focus its attention on.

Shoni Schimmel has been named an All-American by ESPN.

Russ Smith has been named an All-American by SB Nation.

Speaking of Russ, here he is on the cover of this morning's USA Today, which still comes in print form.

CBS ranks the 68 NCAA Tournament coaches by how good they were when they actually played basketball, and Rick Pitino checks in at No. 23. Pitino played three years as a point guard at UMass (1972-74), where he dished out 329 assists.

After 1,001 simulations, WhatIfSports has declared that Louisville is the team most likely to cut down the nets in Dallas.

Seton Hall coach Kevin Willard knows both Rick Pitino and Steve Masiello well, but he says he can't pick against the Cardinals on Thursday.

"It's a long shot, but everybody's got a chance in the NCAA Tournament," Willard said. "The way Russ Smith is playing, the way everybody [at Louisville] is playing, I think they're playing at a different level from everybody else in the country."

Willard plans to enjoy the game, but he won't be rooting for the local underdog Thursday night.

"I love Stevie, he's a good friend, but I worked for Coach Pitino for 10 years," Willard said. "My heart is always with Louisville."

U of L recaps its pro day.

A look at the current most popular upset picks in the tournament.

Jeff Greer looks at ways that opponents can beat Louisville.

"Every team has a weakness," Hancock added.

His teammate, Wayne Blackshear, agreed, but countered that Louisville is playing so well that "it's up to (opponents)" to find the Cardinals' weakness.

"You have to match our energy, our intensity for 40 minutes," senior Russ Smith said. "If we're tired, the other team's exhausted."

Here's a link to the Manhattan message boards, which don't appear to be especially active.

Seeing his team's name pop up next to Louisville's was a gut-punch for Steve Masiello.

"How they're a 4-seed I have no idea," Masiello said. "They have the best guard in the country in Russ Smith. One of the best if not the best tournament coach. So it's a really tough game for us to play and a bad matchup."

Masiello and Pitino go way back -- all the way to 1987, when Pitino was the 35-year-old coach of the New York Knicks and Masiello was a 10-year-old ball boy for the team. Masiello ended up playing for Pitino as a walk-on at Kentucky, and later coaching under him for six years at Louisville, before being hired at Manhattan in 2011.

Masiello called Pitino "a second father" in an interview with ESPNNewYork.com in the fall of his first season with the Jaspers. And now he has to try to beat him in order to take the next step on his own professional journey.

Another reporter suggested that the selection committee was having a little fun with this pairing. "Not fun for me," Masiello said. "I don't know who they're having fun with, but it's not fun for me."

Fox Sports' Stephen Bardo says Louisville is "overhyped" and not the favorite in the Midwest.

On Louisville: I find it hard to believe Louisville is the favorite in the midwest region because if you look at their overall body of work, it's pretty weak outside of the conference. They've beaten up on the AAC, but the ACC is top heavy. I think the selection committee is doing a better job of not taking in the last ten games, like they used, but weighing the games early in the season the same as the ones late in the season. I believe they're overhyped.

And finally, the madness gets underway tonight. There's a pretty decent chance that if Louisville makes it to Saturday, they'll be facing one of the 12 seeds battling it out in Dayton tonight. That's reason enough to tune in.