This was Katie Belle Habibi's reaction to Louisville's draw last night, but she's since settled down and is ready for the madness.

Spread check: Louisville opened as a 12.5-point favorite over Manhattan. That line has since risen to U of L -16.

For those wondering, Louisville will be departing for Orlando on Tuesday night. The Cards will meet with the media from 4:30-5 on Wednesday, and then have open practice from 5:10-5:50.

From 6-8 tonight, I'll be spearheading an SB Nation NCAA Tournament war room chat where we'll talk all things big dance. Look for the link over on SBNation.com and don't leave me there by myself.

In non-tourney news, if anyone is looking for a Louisville fan-friendly option for Thunder Over Louisville, the Galt House has you covered. 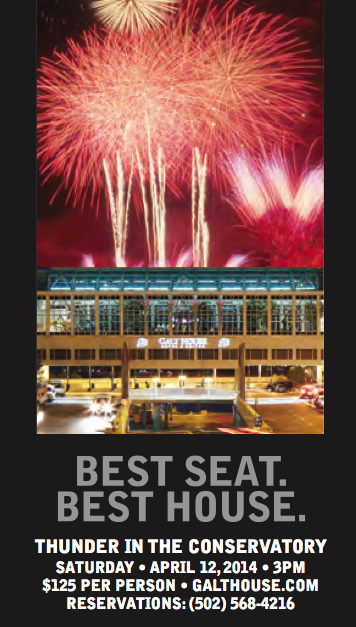 Tickets are on sale right now at GaltHouse.com.

Your "let's focus on game one" fact of the day: A 13 seed has defeated a 4 in each of the past six NCAA Tournament. That's easily the longest streak since the tournament expanded to 64 teams.

Louisville's pro day took place on Monday, and early reports are that Teddy Bridgewater was solid, but not spectacular. Of course who knows how much of that is genuine opinion and how much of it is posturing for draft purposes. The NFL is weird.

One of Ken Pomeroy's final top five is not like the other.

The folks over at Camp Quality Kentuckiana, a non-profit, year round support program and summer camping experience for children dealing with cancer, are selling $20 tickets for a chance to win a sizable piece of the Final Four court signed by Rick Pitino. 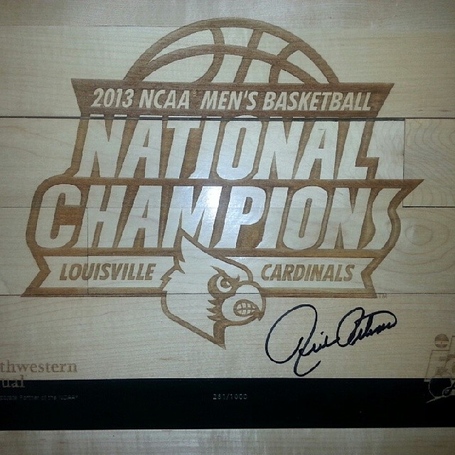 100 percent of the proceeds go to Camp Quality Kentuckiana, and they've only sold 13 tickets at the moment, so you've got a pretty good shot at winning. Anyone interested in purchasing a ticket should contact eddie.bobbitt@campqualityusa.org.

The drawing for the winner will be done on television in between the Final Four games three Saturdays from now.

Yahoo's Jeff Eisenberg talks about what the committee got right and what it got wrong, and I won't make you guess what one of the "got wrong" bullets was.

What they got wrong: Seedings for Louisville, New Mexico, Colorado

One reason the Midwest Regional is overloaded is because the fourth seed in the reason deserved better. Defending national champion Louisville went 29-5, won the American regular season and tournament titles and boasted an average margin of victory of 22 points in its 29 victories. The Cardinals' strength of schedule was mediocre and they only beat five RPI top 50 teams, but they were clearly too good to award a No. 4 seed and imperil a No. 1 seed in the Sweet 16.

Louisville was the most high-profile seeding mistake but certainly not the only one.

How does Colorado get a No. 8 seed when it went just 9-8 overall after leading scorer Spencer Dinwiddie tore his ACL? Isn't a No. 5 seed a bit generous for a Saint Louis team that limped into the NCAA tournament losing four of five? And didn't New Mexico deserve a line or two better than a No. 7 after winning 27 games, defeating Cincinnati in non-league play and taking down San Diego State in two of three meetings to capture the Mountain West tournament title?

Dennis Dodd is the only member of CBS' college hoops team who has Louisville winning it all.

Louisville's 4 seed is the "absolute shock" of the 2014 bracket.

One of my favorite tweets in a long time.

@CardChronicle I just told my son that #Louisville got a 4 seed. pic.twitter.com/ZdZ9YaRj5Y

Russ Smith has again been nominated for the Capital One Impact Performance of the Week Award. You can vote for him here.

Your Midwest Region preview from Yahoo.

Nate Silver, the statistical guru who has nailed just about every political race or data ever, says Louisville has the best chance to win the national title and the third best chance of any team (behind Kansas and Arizona) to make it to the Final Four. 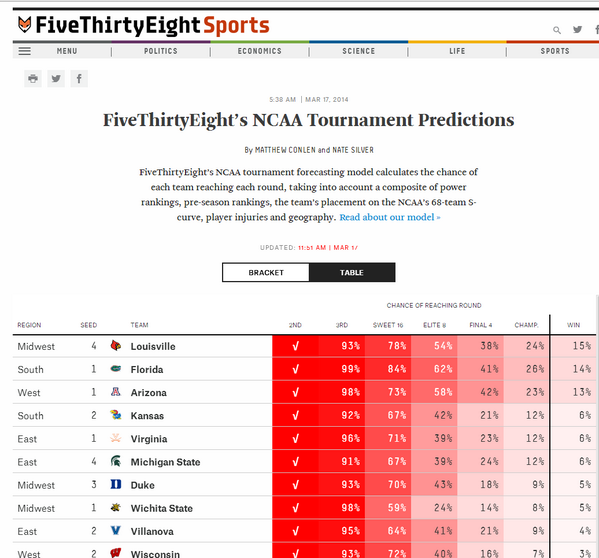 Silver also predicted that the Cards would win it all a year ago, but said this tournament is much more up-in-the air and that there isn't really a "favorite."

The happiest of birthdays to Terry Rozier, who turns 20 today.

This video is a couple of years old now, but it's still a nice all-access look at Manhattan and Steve Masiello, who talks about the ways in which he tries to emulate Rick Pitino.

The sportsbook director at the Wynn in Las Vegas says Louisville would be favored over every other team in the field this year.

The Washington Times examines the start of the second Bobby Petrino era at Louisville.

Ricky O'Donnell says that you shouldn't cry for Louisville.

Louisville may be a No. 4 seed, but it still has a look of a national champion. No team has won the championship without an offense and a defense ranking in the top 25 of Ken Pom's efficiency standings, and six of the 11 years the eventual winner has placed in the top 10 on both sides of the ball. The Cardinals did it last season when they won the title with the No. 4 offense and No. 3 defense. This season, they have the No. 10 offense and No. 6 defense.

There's no bulletproof way of predicting March, but Louisville would seem to have everything it takes to get to Dallas. The Cardinals have experience, a legendary coach, a dynamic lead guard in Russ Smith, a beast on the inside in Harrell and a team that excels on both ends of the floor. Yes, Louisville is still a four seed. It probably won't matter.

Less than 40 spots remain in our bracket group. If it fills up before tomorrow then we'll open another one. If it doesn't, then this will be your only shot at winning a Levitchtation shirt (and more) from Strait Pinkie.

And finally, Louisville was once again the biggest television market for college basketball in the country.