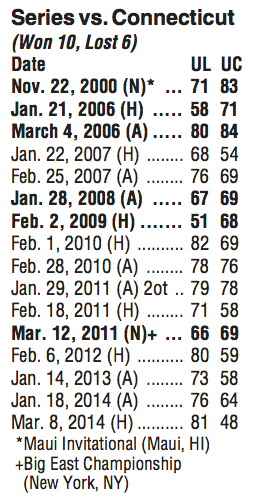 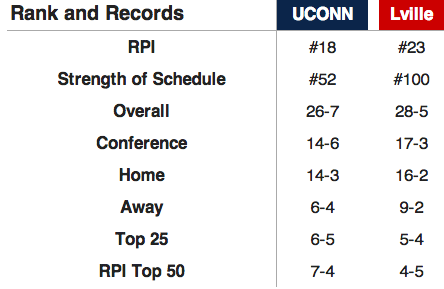 Connecticut was the last team to defeat Louisville in a conference tournament, winning 69-66 in the 2011 Big East title game en route to its third national title. The Huskies, however, are familiar with the feeling of being blown out by the Cardinals after losing 81-48 last Saturday on the road. It marked Connecticut's eighth straight regular-season loss in the series.

Niels Giffey has made 9 of his last 12 3s for UConn, which was ineligible for postseason play a year ago. Conference player of the year Shabazz Napier has 26 points in this tournament. Napier scored 30 in January against the Cardinals, but he only averages 13.1 on 32.1 percent shooting in seven career meetings.

--Louisville has reached the championship game of its conference tournament for the fifth time in the last six years and the fourth straight.

--Each time Louisville has played its last season in a conference, the Cardinals have won that league's tournament championship.

--Louisville is 0-2 against Connecticut on neutral courts.

--Louisville is second in the nation in turnover margin and third in steals per game (10.3).