Creighton Harley and friends are spring breaking in Panama, but still maintaining the proper level of focus.

This is an actual person.

ESPN followed up with the 22-year-old who thought it was wise decision to do this, and he explained himself.

"I'm not delusional," Black said. "I know we've had a rough season. Big Blue Nation is down and the majority of people have no faith in us. But we have faith in ourselves."

ESPN.com also spoke with the tattoo artist, who asked not to be named but verified the tattoo's authenticity.

Black said he hopes his confidence in getting the tattoo will be seen by the players and give them a necessary boost.

"My friends are loving it," Black said. "They know it's typical me."

The National Wheelchair Basketball Association is having its national tournament here in Louisville, and the Metro United Way is seeking volunteers to act as timekeepers, scorekeepers, greeters, shot clock operators, etc. Anyone interested in signing up should go here.

Rick Pitino misses MSG and New York as much as anyone.

"Personally at Louisville I miss [the Big East Tournament] very much," Pitino told SNY.tv by phone Tuesday. "But the University of Louisville is moving on to the ACC and we're looking forward to that.

"But personally, it's a big void for me."

Russ Smith checks in at No. 4 in the latest Player of the Year rankings from CBS.

4. Russ Smith (Louisville)
Why he's here: Again, we're splitting hairs here. But I would've actually voted Smith, at this point, as the AAC POY ahead of Napier given that he's averaging 17.5 points, 4.8 assists and 3.5 rebounds for a Louisville team that shared the league title. Smith's shooting percentages are up from both inside and outside of the arc. His assist numbers are up, too.

Marques Maybin has a message for the AAC voters who didn't tab Russ Smith as their Player of the Year.

Starting on Sunday, Red V Blue will be available for online viewing. Viewers can pay $10 and then view the documentary as many times as they desire.

You can actually watch it right here on CC if you fear all other websites:

Richard Pitino's Minnesota squad kept its NCAA Tournament hopes alive by beating Penn State on Thursday. If they can knock off Wisconsin today, not only will they lock up a bid to the big dance, but they'll probably help improve Louisville's seed in the process.

I miss that vibe around the city of Louisville during March. Really ain't nothing like it. Everywhere you go they be so turnt up 😂😂😂😂

Via ESPN, since 2000, schools that won conference tournament games by at least 40 points are 4-6 in their next game.

Somehow this statistic does not bother me.

Despite a 61-point victory, Louisville actually moved down in today's SB Nation bracketology. I know how to contact this Dobbertean fellow.

Chris Jones has dealt with the pain of being back in the city of Memphis by surrounding himself with family.

"Wow-za! Yummy!" Jones told his grandmother when he learned that she was bringing 40 of those treats to the Peabody Hotel. Kirkwood nearly cried.

The magnificent Peabody is home this week for the University of Louisville basketball team. The Cardinals began their push to win the American Athletic Conference tournament by overpowering Rutgers, 92-31, Thursday afternoon.Jones was supposed to tell his teammates that the cupcakes were for them, too. He did not. How many did he eat? Probably one for each of the seven field goals he made while scoring 18 points.

"He was so excited because he hadn't seen me and I hadn't seen him play (in college)," Kirkwood said.

Jones needed extra hugs and kisses during this trip because it was only 12 days ago that his step-brother and best friend, Demetrius Ray, was shot and killed in Parkway Village, a troubled neighborhood about 15 minutes from the Fed Ex Forum, not far from where Jones grew up.

Despite U of L's imminent departure from the conference, Andy Katz says there's a possibility that the AAC could one day end up playing its league tournament at the KFC Yum Center.

Anton Gill missed yesterday's game because of a concussion and will likely be unavailable again today.

I received the following email this morning, and there's a 95 percent chance it winds up being the highlight of my day:

This spring, Dockers Game Day Khaki collection is back, with 10 new college partners including the University of Louisville. Fans can 'Get Ready' and celebrate school pride without sacrificing style in one of two quintessential khaki silhouettes: the Alpha ($78) for a modern slim and tapered fit, and Classic ($68) for a straight, classic silhouette. New for spring, we've also introduced the Game Day Short ($55).

Game Day Khakis and Shorts are available in two colors, khaki or Louisville Red, and feature the official team logo on the back pocket and "GO CARDS" inside the waistband. Wear them off the court, in the stands and beyond.
Dockers Game Day Khaki collection is available at Dockers.com. A full list of participating schools is below:

And here are the game day khakis being discussed: 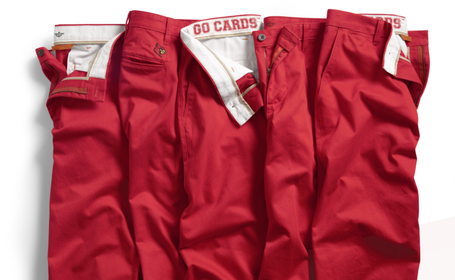 Actually look pretty snazzy, but if the next month goes as planned....let's just say I won't be needing those.

The U of L women's team will be hosting a "Selection Monday" party at the Yum Center.