Let's talk match-ups and hand out some awards.

A tradition very much like many others: the American Championship on various ESPN platforms. Grab some popcorn and tell your friends. Here's an updated bracket followed by the matchups and predictions by cardscott5 and me (ULhothot). 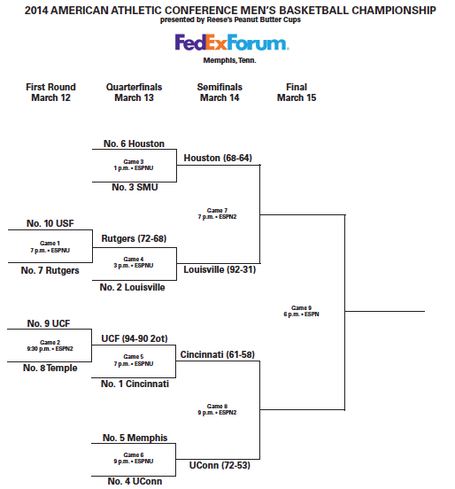 cardscott5: Houston did what Hot Hot said and beat SMU. SMU did what I said they would be and were Road SMU. They are a hot choice to lose in the tournament. Losing in the tournament is what I have done with my predictions. It's also what Houston will probably do tomorrow if the Louisville wrecking ball is still in effect. The beating on Rutgers was savage. The Cardinals had no real problems with Houston, unless you think 15 point margins are close games, and they are playing fantastic. Hard to not see them rolling again. The path for the title game looks lined in gold for the Cards. Strange things have happened. They probably won't in this game.

ULhothot: Louisville set Rutgers basketball back 5 years while Houston held Nic Moore in check and hit their open jump shots to get here. Louisville's favored by 18 in Vegas, another reminder that sometimes losing a coin flip is winning.

Houston is not as bad as their record looks, they have athletes like Danuel House and Chicken Knowles, a 3PT shooter in Jherrod Stiggers, a pass-first point guard in Baylor transfer L.J. Rose and one of the better big men in the league, TaShawn Thomas. When the Cougars play team defense like they did vs. SMU, they can hang around with a Louisville, especially if the Cards come into this game a little too loose after the Rutgers laugher. I'm taking Louisville but it's closer than 18 points.

ULhh: We need to address Shabazz's postgame comments Thursday night, because they are hilarious. A sample:

Asked what it is about the FedExForum that brings out his best, Shabazz Napier says: "... I think it's just the way Memphis plays defense."

Shabazz Napier on Kilpatrick: "He cares so much about that MVP. ... I don't care about it. If he wants it, he can have it."#UConn

When it was announced, I had no qualms with Bazz winning American POY and his shot at Sean Kilpatrick only strengthens his resume. It's hard to hate a senior All-American candidate shamelessly trolling his opponents. I love college basketball.

If Cincy wins, I hope Kilpatrick addresses Napier's comments. If UConn wins, I'm giddy at the prospect of Shabazz making fun of Justin Jackson's mean face and comparing Russ Smith to Nate Lubick. Either way, it should be entertaining. As for the actual game, I like UConn's confidence and I worry about Cincinnati's ability to score, but I think the Bearcats toughness and depth are the difference in a slow-paced affair.

cs5: Napier's comments should only stoke the fire between the two new rivals (I guess they are rivals?). The 'Who's Sean Kilpatrick?' thing between Xavier and UC didn't end very well for UC so this issue could be a thing that doesn't matter at all. I can't believe we fell for 'Trust Memphis in March' like idiots. The point of these pieces is to showcase our idiocy. It's worked very well. The good news is that I'm in third place in the Card Chronicle AAC tournament picks pool. Oh yeah, there is a pretty important game to talk about.

Cincinnati looked horrendous against UCF. I can't see them looking that horrible Friday night. Cincinnati has been a very interesting team because they handled UConn, Louisville and SMU in the first games of those meetings and lost the last three in various degrees of heartbreak. I think Cincinnati could be a 3 seed in the tournament if they make the finals. I feel like I'm going to pick UConn here though. One of the biggest reasons UC won against UCF was because of Troy Caupain. He's played terribly against the Husky guards. Ideally, I would pick Cincinnati to win 63-61 or something like that. But for the sake of being different than Jerk Jerk, I'm going with the Huskies. They match up very well with Cincinnati. I do think Kilpatrick will outplay Napier and every UC fan on twitter will lose their shit that Napier was player of the year.

ULhh: Well, looky here, a Big East Tournament Championship rematch from 2012. For all the criticism the conference endured in its first athletic calendar year, a Cincy-Louisville rendezvous in Memphis for the bouncey-hoops tournament title would be a pretty decent capper.

Looking ahead, playing three knockout tournament games in three nights leads to tired legs and tired brains. Louisville will have the advantage here if they blow out Houston and rest their starters again but one wonders if 30 and 60 point blowouts will be valuable primers for a physical rivalry game. In a somewhat unexpectedly thrilling finish, Cincinnati struggled to put UCF away and were fortunate Kasey Wilson didn't knock down open 3s. And they'll have their hands full with UConn Friday night, a team that beat them just two weeks ago.

We know Cincinnati will slow the pace and neutralize U of L's speed, a strategy that was one Russ Smith jumper away from helping UC sweep the Cards in league play. Contrarily, Louisville will want to run and run and 10-0 and 15-2 you to death, and if they can get some separation in the second half, I don't see Cincinnati being able to catch them and still have enough juice to close out the game.

This is a tough one, but I like Cincinnati a little more in this spot. Louisville looks like a wrecking ball, but UC's already shown they can force U of L to play at their pace and that's the difference Saturday night. Kilpatrick seals it at the free throw line and an American dynasty is born.

cs5: Connecticut matches up well with Cincinnati but not well with Louisville. Their other guys are exposed, hey now, too much and the stars can't carry them. College basketball is dictated by the scorers. When he called college games during the lockout, Jeff Van Gundy said the difference between the pros and college was that all 5 guys score in the NBA and 2 or 3 score in college. UConn had that happen against Louisville twice where no one could score. They also have the problem where they can't stop the guys on Louisville that can score.

Louisville was the heaviest favorite to win the conference title on Team Rankings. Their road, in my very wrong mind so far, is paved with teams they put whoopins on. They should win the title. This is a team no one wants to play next week for good reason. Except for Memphis. Memphis is hoping they can be that 15, 14 or 13 seed. I do think UConn plays this one more like the meeting in Connecticut. Hopefully Kevin Ollie will freak out again.

cs5: I think Kilpatrick should have won the award. I'm of the mind you reward winning. Cincinnati won. Kilpatrick was the best player.

ULhh: I usually hate when conferences award co-winners but this year I thought the POTY award should've been split between the trio of Russ, Bazz and Kilpatrick. All three will get All American honors, which is pretty rare for one conference, especially one ranked below the SEC by KenPom. That said, I'm cool they gave it to Shabazz.

ULhh: The last three games killed Larry Brown's momentum for COTY. This is what happens, Larry.

cs5: Some people think there was a conspriacy to have Napier win so that UC wouldn't sweep the awards. That's really dumb. If there was any award that would have been screwed with, it would be coach of the year. Give it to Larry Brown, like we did at the mid-season, and no one bats an eye. If you screw anyone over, it's the coach, not the players. Because who honestly cares who the coach of the year is?

Justin Jackson winning the DPOTY was the easiest award. Block shots in a flashy way and everyone thinks you are a great defender. Probably why everyone blocks the ball out of bounds instead of catching it or batting it softly at a teammate. Jackson was more than that. He won the award in November though.

ULhh: Jackson would've been my preseason DPOTY pick and nobody really threatened him in this race. I'll give an honorable mention shoutout to Louisville's Chris Jones, who is currently 5th in the nation in steals percentage per KenPom.com.

cs5: I made up an award to give to Harrell. Hopefully he doesn't rest easy after reading this after he used the snub in the mid-season to go on an amazing tear. He really did that. His mom told me on twitter*.

*His mom did not tell me this on twitter.

ULhh: The hero we deserve:

Montrezl Harrell’s parents were killed by a basketball rim when he was a little boy.

TEAM I'M GLAD IS OUT OF THE LEAGUE: Rutgers

cs5: GTFO forever. Take the "The RAC is an intimidating place to play" story from never with you.