Look, I'm sure there are bound to be some bad ACC teams in the future, but I would be willing to bet a large sum of money that none of us will ever see a 61-point Louisville win (or loss) in a conference tournament ever again...and I fully expect all of us to live well into our hundreds.

The best thing, or at least one of the best things, about this team all season has been its refusal to look past any opponent. Every squad gets Louisville's best effort, which is why the Cards will enter the NCAA Tournament as the nation's leader in margin of victory and why, for the first time in program history, Louisville has lost to a grand total of zero unranked teams. Add all that to the fact that Rick Pitino's teams always seem to be at or near their best this week, and a recipe for disaster was in play for Rutgers.

But a 61-point disaster is a completely different level that's impossible foresee in this type of situation. I think the best summary of the day was Pitino beginning his postgame presser with: "I'm not really sure what to say."

The truth is, Thursday was always going to be a little bit awkward for the team and for Cardinal fans. Since making the move to the Big East, U of L had played exactly two games in conference tournament play against teams that didn't go on to make the NCAA Tournament -- Providence in 2009 and Seton Hall in 2012. Neither one of those teams was anywhere near as lowly as 12-20 Rutgers (in fact, the Friars were a win over U of L away from making the big dance in '09).

It was a bit odd trying to get revved up for a quarterfinal game against a dreadful team that you had a feeling would pack it in if they got smacked in the mouth hard enough, which is understandable. It'll be about as weird to go into a Friday night semifinal game against someone other than Notre Dame (In my mind, the entire Fighting Irish team is going to walk in and take midcourt seats just before tip-off. The FedEx Forum will go silent, not sure how to react to the awkwardness. Then Garrick Sherman will make eye contact with our team, stare intently for a few seconds, nod slightly and then slowly lift a thumbs up accompanied by a "give 'em hell" that causes the arena to erupt. That's probably going to actually happen).

For the fans, Friday night's game might not generate the same type of "can't think about anything else all day" excitement as semifinal games of years past, but it's comforting to know that type of thing has no effect on the team. Their sole focus is going to be on making the night before Selection Sunday yet another unofficial holiday in Louisville.

I suppose we might as well start with the records and postgame notes:

Those are good things us and bad things for them.

When he's open and hit with a crisp pass to the chest, there's no one I have more confidence in from the outside right now than Chris Jones. He's playing at as high a level as he has all season, but there's still going to come a moment in a close, big game where he's going to have the urge to try and do something too much that will hurt the team. That's the moment where he has to show true growth and resist.

It is ridiculous how much more confident I am with Stephan Van Treese on the court than without him right now.

After going the entire season without a double-digit rebounding effort, Van Treese has now achieved that feat in consecutive games. He didn't have as many Steves as usual on Thursday, but that's because he didn't need to. There was also a point where Rutgers attempted to pull a Steve on Steve, and the result was Steve getting one of his four steals...Steve had four steals.

The SVT missed lay-up is sort of like the new Gorgui goaltend: You're probably going to get one a game, but you can't get mad about it. It's a glaring error, sure, but he's doing so much else good on the court that doesn't get noticed that you just have to shrug it off and chalk it up to Steve/Gorgs being Steve/Gorgs.

This is pretty hilarious.

The live-tweeting stopped with 7:59 left in the first half. pic.twitter.com/tIABC8S6iX

Not sure if you guys are aware, but the University of Louisville men's basketball team is a perfect 17-0 when freshman guard David Levitch makes an appearance.

I'm also currently drafting a petition that will force the AAC to put an asterisk in this game's box score which notes that Levitch was robbed of two points due to an obvious goaltending violation that went uncalled. That was worse than the coin flip, the Russ snub and the "second team Teddy Bridgwater" combined.

As pointed out by Louisville basketball fanatic and noted football enthusiast Eric Wood, every time Levitch checks into a game, the first thing he does is tighten his shorts extra tight. Wood has also requested a montage of this act pieced together from tightening moments throughout the season.

It's on all of your heads if he's let down.

We are going to be telling stories about these years for pretty much as long as we live...which, again, will be well into our hundreds.

Northwestern scored a huge upset of Iowa in the Big Ten Tournament, but seeing that the new team coming to their conference lost by 61 may have been the best thing that happened to the Wildcats on Thursday.

Not really, I'm just trying to make jokes. Northwestern has been bad for a long time and someone that might be worse coming to the Big Ten is going to be good for them. That's all I was trying to say.

The U of L band was in postseason form as well on Thursday.

Hey @CardChronicle, what did you think of "block that kick" and our Levitch cheers?

I enthusiastically supported both and I eagerly await the cheers you have in store for this evening.

I can't be the only one hoping that Russ adopts a score-first mentality for at least a stretch on Friday night. This "pass a lot and beat the brakes off teams" phase is awesome, but there's going to be a time between now and the end of the season where we need him to shoulder the scoring load.

One huge positive that came out of Russ' Thursday performance was his 7-of-8 shooting from the charity stripe. We know he's going to get there a decent amount in the tournament, and he has to be much better than the 69 percent clip he's shot so far this season.

If you haven't seen it yet, we may have already had the quote of the postseason.

COACH PITINO: No, I didn't. I knew it was going to be a good night when we went to throw a lob to Stephan and Monday Montrezl dunked on Stephan, I knew it was our night at that point.

STEPHAN VAN TREESE: I'm not happy about that, I thought he was throwin' it to me, and I didn't even see Montrezl and he dunked on me, I was like, "Man, that's not fair."

That was awesome. Both the quote and the actual posterizing of one teammate by another teammate.

The most overlooked aspect of this game might be that Montrezl Harrell, probably Louisville's best player over the last two weeks, barely even played. The fact that the Cards could be up 52 at the half on any major conference team without Harrell playing more than five minutes is terrifying...you know, for other people who don't enjoy Louisville basketball the way we do. For us it's great.

We just deal with facts here. 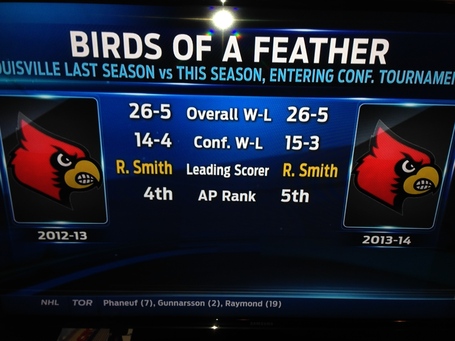 Almost as incredible as the final score? Wayne played 20 minutes and only had one foul.

Actually nowhere near as incredible, but...jokes.

It's remarkable how comforting seeing the team in sleeves was. It's like coming home for the first time after going away to college or seeing your favorite Christmas decoration for the first time in December. I wouldn't say I felt transported back to last season or anything, but there was definitely a carryover feeling.

I enjoyed it, and I enjoy the sleeves. The team seems to enjoy them as well.

Would love to see Luke start to get into a rhythm and bury four or five treys tonight, because that has to happen for this team to have a shot at repeating.

I really like that Luke's just now bringing back the shot-fake/get fouled on a three combo. It's like the word got out too much at the end of last season, so he chose to shelve it all year until March. Veteran play.

Nice to hear both Russ and Luke address the fact that Stephan Van Treese did not attempt a three after the game. That golden fruit will never be hanging as low again, my man.

Terry got his offensive game back on the right track after going through a little bit of a slump in the three games since he went off against Temple. Also, I react to Terry rebounds with as much excitement as one can possibly react to a rebound. They're like the Trez dunks of rebounding; they're just different.

Starting with 5:36 left in the first half (rough estimate), I began yelling "don't get hurt" on every single fastbreak. Pretty sure that's a new personal record.

Best part about this week is, without question, the zero day turnaround. We're laying the foundation for the trends and the rituals that will hopefully carry this whole thing back into April again, and it all happens so fast.

Can't wait to do it again tonight.