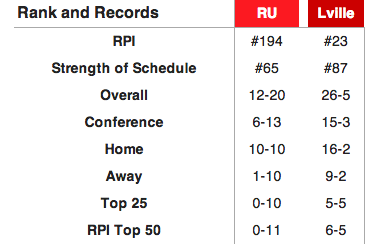 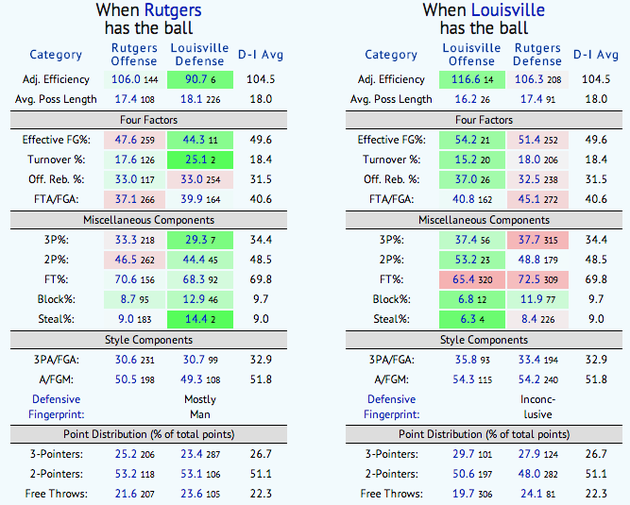 Rutgers advanced to the quarterfinals Wednesday night via a 72-68 win over No. 10 seed South Florida. Kadeem Jack led four Scarlet Knights in double figures with 18 points in just his team's second victory in eight games.

The Scarlet Knights have dropped nine in a row to Louisville, the most recent of which being a 48-point beatdown at the Yum Center last month. Rutgers has also lost 15 straight against top 25 teams, including seven times this season by an average of 16.3 points.

Despite playing in the same conference for nearly a decade, this will be the first postseason meeting between the Cardinals and the Scarlet Knights.

--Louisville leads the nation in turnover margin (+6.9) and ranks second nationally in steals (10.0 per game).

--Louisville is 2-0 against Rutgers all-time in games played on neutral courts.

--Louisville is 17-6 all-time in their first conference tournament games in years when they've received a bye.

--Louisville has played in seven conference tournaments in Memphis, producing an all-time record of 9-5. The Cards have won two league championships in Memphis, beating the host Tigers in the title game both times.

--No national champions has ever lost the first game of their conference tournament.

--The Scarlet Knights are 1-13 all-time against defending national champions, including two losses to U of L earlier this season. RU defeated No. 8-ranked UConn, 67-60, at the RAC on Jan. 7, 2012 for their lone win over a defending title holder.

--Louisville's 26-5 start is the second best of the Rick Pitino era and the same record last season's national championship team had through 31 games.