A preview of the first two days of the AAC Tournament by cardscott5 and ULhothot, just as soon as we flip a coin to decide who has to write the intro. (I lost).

Great moments are born from great opportunity. But that's not what you have here, tonight. That's not what you've earned here tonight. Not these games. Not tonight. But you will still watch, because you've become institutionalized and you're a little curious to see if USF brought their Billabong board shorts to Memphis. Let's talk about the matchups and our predictions. 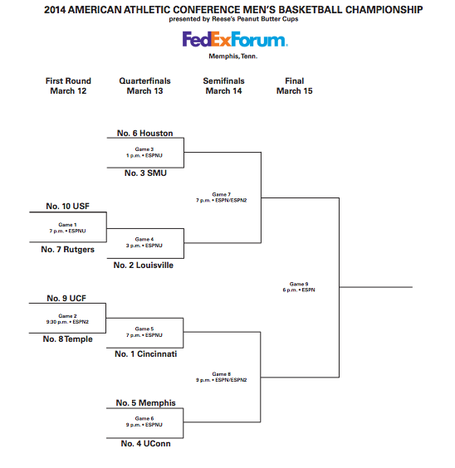 cardscott5: The first game of the AAC tournament pits Rutgers against USF. If you can find a more boring and fitting way to send Rutgers out of the league, losing to USF in a 60-59 game would absolutely be it. I've watched a lot of Big East basketball. I've watched a lot of AAC basketball. I can honestly say I don't think I've ever watched more than 5 mintues of USF at Rutgers. That matchup alone just made me yawn. Anyway, I'm glad Rutgers is leaving the league. I'm not picking them to win just so they leave faster. I also do not want to watch another 15 hour Rutgers vs Louisville game that I won't remember after the horn sounds.

ULhothot: The Bulls might be a two point underdog in Vegas, but USF is a heavy favorite to make SportsCenter's Top 10 Plays on Wednesday. Probably a Victor Rudd dunk after a broken play. I don't know how much I'll watch of this game, especially if USF didn't bring their board shorts. If it were played inside Madison Square Garden at noon instead of Tennessee at 7:30, I'd be giddy about Rutgers-USF, which is kinda weird, but I don't think I'm alone. Looking ahead to Thursday, if Louisville struggles with the winner of this game, I'll be shocked, which is just extra incentive to watch games in the MEAC or ACC instead. Or eat some tacos with loved ones. Nobody's judging you here.

ULhh: Neither team plays much D, Temple is fun to watch when they're hitting 3s and UCF has a 330 pound center nicknamed "McWide" and Isaiah Sykes, who looks like an All-AAC Second Team talent against bad defenses like Temple's. There's not much more you can ask from an 8-9 AAC Tournament game held 1,000 and 800 respective miles away from each school's campus. These teams split their home & home games this year but I like Temple a little more in this spot coming off a schedule-aided two-game winning streak. And assuming it's a tight game, I'm going to trust a team coached by Fran Dunphy over one coached by Donnie Jones.

cs5: These teams have actually played fun games this year, which was surprising. Mostly, all of the great finishes have come in the worst games. Temple vs UCF is one of the worst games. One meeting went into OT and the second one was a 2 point game. I'll take Dunphy and Dalton Pepper over UCF and the pinstripes. Mainly because I don't want to watch UCF against Cincinnati. Like, I really don't want to see that at all.

cs5: SMU played four games in conference play that were decided by under 8 points. Two of them were against Houston. These teams matched up suprisingly well. In fact, the Houston game was just one of two (UConn) with a single digit margin in Dallas. This game is being played in Memphis. Road SMU is a thing. For my money though, Houston is the more confusing team. The Cougars had a four game win streak and played Cincinnati and SMU tough in the two games before that. So of course they go to UCF and lose by 21 and give up 100 points. I just don't get that team at all. They have players but they don't have that experience or real basketball IQ really. They might be a year or two away from being a bubble team. I wrote a lot about Houston because I think they'll lose and won't write about them again.

ULhh: Big fan of the temporary Larry Brown era at SMU, but I'm picking Houston in a mild upset here. Not because they're the better team or better coached; they're clearly not. Just feel this is a good matchup for them as SMU's perimeter defense isn't that great, they have one decent ball-handler and the whole Road SMU-Home SMU phenomenon.

That SMU ball-handler issue is no secret. Getting Nic Moore into foul trouble is a big key to taking control of the game, so Houston would be smart to iso him with L.J. Rose or Danuel House. I see one of two oddly-specific scenarios playing out here: a) Houston takes and misses a lot of 3s while SMU builds a big lead and cruises, or b) Houston hits their jumpers & clings to a 5-10 point lead throughout the second half, collapses in the last 4 minutes, but recovers to win on a crazy last-second play. Really hoping for the latter.

ULhh: We both picked USF to advance here, but that's where the dream/nightmare ends for the Bulls. If Stan Heath hadn't beaten Louisville on Senior Night in 2012, sneaked into the NCAA Tournament & crab-dribbled his way to the Round of 32 a couple years back, would he be on the hot seat at USF right now? I mean, it's USF but they do have a new AD, remodeled basketball arena and maybe they'd be looking at other options right now if not for USF ruining Kyle Kuric's farewell speech. If Louisville takes the first half off, USF can make things interesting but Louisville by 20 seems more likely, as does another SportsCenter Top 10 highlight by USF, after the game is already out of reach, natch. The main goal for Louisville here is to let Memphis Chris Jones settle down and find his Louisville Chris Jones game.

cs5: I can see USF playing Louisville close for a half and then getting wiped out the first 10 minutes of the second. Louisville has a pretty 'easy' path to the conference title game. Playing a USF team they murdered by 65 points this season is a major reason why. I do think Heath would be on the hot seat if not for that miracle run of two wins. I don't really know if USF could do that much better though. Heath has gotten some talent there. Losing Anthony Collins for the year was a major bummer. It's looking like a couple of years ago was a blip and not actual success. I would say the main goal for Louisville in this one is to get some rest and run up that Levitch record of perfection.

cs5: I'm not sure this is the best matchup for Cincinnati but I do think that playing at night is a major help for them. Whoever played that 1 pm game in front of 2,000 people was going to be in for a major letdown. I think that's how Houston could pull the upset. That also means if this game is close at all, Temple will have a homecourt advantage with the Memphis / UConn fans rooting against Cincinnati. Temple's best shot is if Dalton Pepper continues to kill Cincinnati. If not for a weird play where Pepper didn't get the ball late in Philly, maybe Temple would have beaten the Bearcats earlier this season. I see Cincinnati pulling away late, just like they normally do against teams like this. Two games in two days, especially against the Cincinnati defense on night two, seem like too much for the Owls.

ULhh: Temple can keep this one close enough to steal it at the end, but they have to harass Kilpatrick and make Cincinnati labor for points. That or spraining Justin Jackson's ankle in the first 5 minutes like they did earlier this season. As you said, the crowd should be a factor for as long as Temple remains within striking distance, which requires Quentin DeCosey and Pepper patiently waiting for open shots and knocking them down. Temple is capable of slowing Kilpatrick down, but it'll be interesting to see how he reacts to getting snubbed for AAC Player of the Year. I kind of like that Temple will hypothetically be playing their second game in Memphis on Thursday while Cincinnati might be overlooking them. I have to stick with my Temple quarterfinals upset pick from our mid-season post, but I feel a lot less confident about it now with the Kilpatrick PotY snub.

ULhh: The expectation is a high-scoring back-and-forth game, but I like Memphis to roll over UConn here. Shabazz is awesome and UConn swept Memphis in league play, but they're playing for slightly higher stakes this week and I like Memphis a lot in this spot, playing in front of their rowdy fans at 9pm. I see Amida Brimah getting himself into early foul trouble, as he's prone to do, and Memphis' guards frustrating UConn into turning the ball over and racking up the And-1s slashing to the hoop. Do you see Shabazz & Co beating Memphis a third time?

cs5: Beating someone three times is really, really hard. The Connecticut team that won at Memphis doesn't seem like the same one that's playing now. The offense for UConn has been a major issue. They've scored under 60 in 3 of their last 6 games. Of course, the Memphis defense isn't known for being the best in the league. You would think with that talent they could dominate on both ends. That's the mystery of Memphis. The Tigers losing conference tournament games on their home court hasn't been a thing that's happened in a decade just about. Cue Darius Washington. It's hard to go against Memphis here. Which is why I won't. It will be interesting to see how UConn plays after Louisville beat them by a million.

We'll have more later on the semifinals and finals of the AAC Tournament, plus a few awards.