Bill Bass enjoying his time at the Grand Canyon, but also keeping his focus as the hours until the start of the postseason continue to tick down.

The United States Basketball Writers Association has named Russ Smith as its District IV Player of the Year. The district consists of six states (Kentucky, Tennessee, Mississippi, Alabama, Georgia, and Florida), and more than 900 USBWA writers voted for the award. Montrezl Harrell was also named to the All-District IV team.

Louisville signee Shaqquan Aaron is one of 26 members of the class of 2014 who has been selected to play in Jordan Brand Classic All-American game in Brooklyn next month. The only downside is that the game will be played on April 18, the same day as the Derby Festival Classic.

Finding a quarterback is the most pressing issue facing Bobby Petrino as he prepares for the 2014 season.

Petrino also must get his players prepared for a much more grueling schedule, in a much more grueling conference home. Gone are the days when Temple, UConn and USF clogged the league schedule. The Cards open at home against Miami without much let-up to follow, as they join Florida State and Clemson in the much tougher ACC Atlantic Division.

Of all these tasks, one stands out as the most difficult.

"The biggest challenge for us is to replace a guy like Teddy Bridgewater, one of the premier players in the country," Petrino said in a recent phone interview. "We have to go out in spring and compete and find out who it's going to be. We have a couple guys who have the talent, just real inexperience."

Will Gardner and Kyle Bolin are at the top of the list when spring practice opens next week. Gardner spent last season backing up Bridgewater. He played in five games, and has attempted 12 career passes. Bolin, a redshirt freshman, has never played in a college game. Incoming freshman Reggie Bonnafon, a four-star recruit, joins the mix this summer.

Your AAC tournament preview from C.L. Brown of ESPN.

Congratulations to U of L signee Chinanu Onuaku, who won a Maryland private school championship and was named MVP of the state tournament earlier this week.

Jon Rothstein of CBS says that the recent emergence of Montrezl Harrell has made Louisville a serious contender to reach its third straight Final Four.

The Cards are trending upward at the right time of year and Harrell is a major reason why. The 6-8 sophomore is Louisville's only capable interior scorer and has been on an absolute tear over the past few weeks. Harrell is averaging 21.2 points and 9.4 rebounds over his past five games and is playing well as any big man in America. Rick Pitino's teams have historically made a big jump in February and this squad is no different. Aside from a bad stretch in the final minutes at Memphis, Louisville has answered just about every challenge during the past few weeks in impressive fashion. If Harrell can continue to dominate the paint and the Cards can continue to get timely 3-point shooting from Luke Hancock (seven made 3-pointers in his past two games), a third consecutive appearance in the Final Four is very much in play for Louisville.

DePaul averaged less than 2,000 fans per game at home this season. No, but they deserve that pricy new arena though.

Ken Pomeroy says that Louisville has a 53.9 percent chance of wining the AAC tournament.

I enjoy the ImmediaDental Smile of the Week. 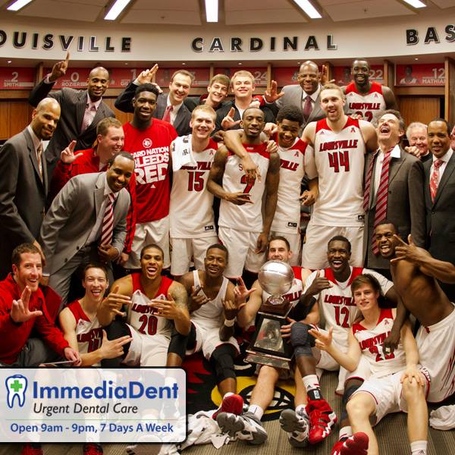 U of L signee Quentin Snider saw his high school career come to a close with a 59-58 loss to Trinity in the 7th region championship game Tuesday night. He leaves Ballard as the school's all-time leading scorer.

The "Year of the Cardinal" documentary from ESPN is now available for viewing on the U of L website.

Just ran into ESPN's Sean McDonough here at the ACC tournament. Says being here and not at Big East tourney is "out of body experience."

Two of the three college hoops folks over at SportsWatch take Louisville to win the AAC tournament. The other took Cincinnati.

For some general college basketball love, here's a really good inside look at Wichita State via SI's Luke Winn.

Russ Smith now needs 58 points before the end of the season to crack the top five of Louisville's all-time scoring list.

Shoni and Jude Schimmel had no idea they would wind up meaning this much to the Native American community.

"I don't think we ever thought it would be this big," Shoni Schimmel said. "When we younger we just had the dream of going off to college and playing basketball. It's a lot more than we thought it would be. For sure we want Native Americans to make it off the reservation."

Coach Jeff Walz has seen it firsthand the effect that Shoni and Jude have had.

"They have inspired Native Americans across the country and given them hope they can get off the reservation," Walz said. "They are 20- and 21-year old kids and they have taken the responsibility to inspire so many."

The regular season Louisville just completed was the first in program history in which the Cards did not lose to at least one team that was ranked outside the AP Top 25 at the time of the game.

Michael Bush has been released by the Bears.

A group of Louisville fans have spearheaded a new Internet start-up that lets you map your life in pictures. Check it out.

Projected champ: Louisville. A coin flip may have given Cincinnati the No. 1 seed, but the Cardinals are clearly the favorite.  The defending national champs are peaking at the right time and have the most favorable draw. If there's a contender who can topple Louisville, it might be either Cincinnati or Memphis. The Bearcats have been the equal of the Cardinals the entire league season and the Tigers swept Louisville in the regular season and have home-court advantage.

Former U of L assistant Steve Masiello and Manhattan are headed to the big dance.

Not an understandable mistake.

Wichita State players were handed MVC championship t-shirts. The brackets on the back of the shirts had ISU winning. pic.twitter.com/vL7e3wNbXe

Rick Pitino appeared on CNBC Tuesday morning. You can check out the video here.

And finally, the latest helping of bracket updates still have Louisville averaging out to a four seed. Not that it matters.