Righting The Biggest Wrong Of The Season

Share All sharing options for: Righting The Biggest Wrong Of The Season

Seven weeks ago, the Louisville basketball team blew a golden opportunity for its first top 25 win of the season when they squandered a lead in the final minute and fell at home to longtime rival Memphis. The atmosphere was bad, there was an awful goaltending call in the final minute, the Cards let the Tigers hang around despite having numerous opportunities to put the game away, and then there was some nastiness between the Memphis players and coaches and U of L fans after the final buzzer.

None of those things, however, were nearly as egregious as what took place on this very website in the days and hours leading up to that game.

Wrapped up in the departure of Charlie Strong and the subsequent coaching search and hiring of Bobby Petrino, Card Chronicle did not engage in one of its most storied and sacred traditions: making fun of Memphis...State.

In hindsight, the disappointing result was predictable, and I am more than willing to shoulder the lion's share of the blame for what took place.

But now is the season of redemption, and one piece of that redemption shall be reaped right now with seven quick and easy points...

1) This is your head coach:

Josh Pastner on 20 wins: "It's a beautiful thing but it's not a birthright. It's a lovely thing, and God bless the United States of America"

3) The last time you played for a national championship, you blew a nine-point lead with 2 minutes and 12 seconds to play. 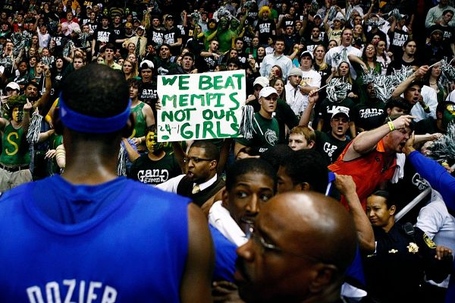 In October 2006, players Joey Dorsey and Hashim Bailey were accused of assault last October. Two women who attend the University of Memphis say the players threatened them and tried to run them over with a car. Earlier that year, former Memphis Tiger Kareem Cooper was arrested for marijuana possession.

The year before, current team member Andre Allen was arrested for soliciting a prostitute. Former star guard Jeremy Hunt was also arrested in 2005. He was accused of beating up his girlfriend. He was later kicked off the team for getting into a bar fight.