Lauren Mears, Justin Hines and Joe Havelda do not care for Memphis.

Jeff Greer's profile of Terry Rozier from Thursday is very worthy of your time.

Pat Forde takes a look at how Rick Pitino and Wichita State's Gregg Marshall have kept their teams motivated during the dog days of the season.

Pitino's gray beard was not exactly a thing of beauty, so in a concession to vanity he had it colored this week. But the coach who was a bit imperious in his 30s and 40s is finding uncharacteristic ways to relate to his players in his 60s.

Last year it was the promise of a tattoo if Louisville won the national title - that was a hugely entertaining premise to the Cardinals. Pitino followed through on that. Now, bearded for the first time in his life, he's once again one of the guys.

"The beard thing is for fun," Pitino said. "... We're having a great time. But I think winning does that. Your team is close when you win, and when you lose they're far apart. I haven't seen too many close teams with seven wins."

Winning is indeed the ultimate bonding agent. But it also helps to have a coach who can find creative ways to reach his players in the dog days of an endless season.

Master P was at the Yum Center last night and said "ughhh." It was like when The Beatles appeared on "The Ed Sullivan Show." 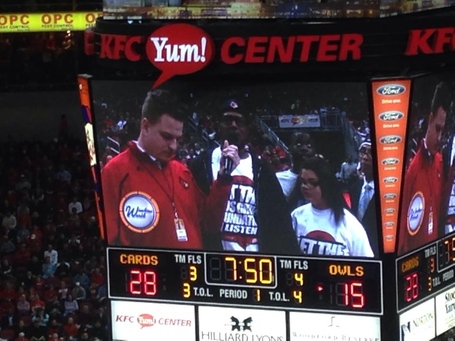 Nothing was the same.

The third-ranked U of L women's team is headed to Fifth Third Arena tomorrow to try and duplicate what the men's team did a week ago. Also, there are still about 6,000 tickets available for Monday's showdown against No. 1 Connecticut at the Yum Center. It'd be awfully nice to send the seniors off in style and lock up a one seed for the big dance on the same evening.

Louisville is up to No. 13 in Luke Winn's latest power rankings.

From Prudat's photo gallery comes easily the most captionable (word) picture of the season. 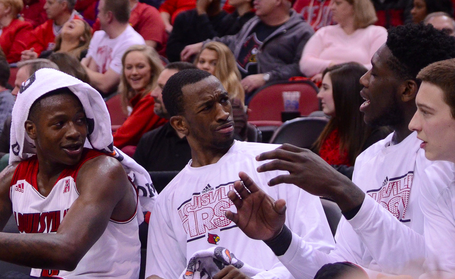 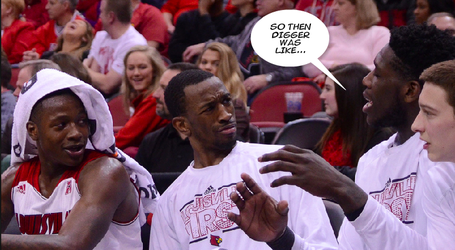 Russ Smith is up to No. 3 in ESPN's latest Wooden Watch.

3. Russ Smith, Louisville: Smith's game-winning shot at Cincinnati Saturday provides a tidy excuse for us to move him up the list. But we don't really need one, for reasons that should be apparent if you've been following along all season. Little has changed in Smith's output from November to now. He's still playing the best, smartest, most efficient offense of his life (51.2 percent from 2, 37.4 percent from 3, 30.6 percent assist rate) on huge usage (31.3 percent) and shot rates (30.0 percent) while maintaining his trademark brand of infuriatingly pesky perimeter and press defense. Last year, Smith was arguably the most valuable two-way player in the country, and he's better -- not to mention more important to his team -- in almost every way this season.

CIRRUS Fitness has released a new line of team-branded fitness equipment. We wouldn't be talking about this if they didn't have Louisville products, which they do.

The Louisville men's soccer team will kick off its spring exhibition schedule with a benefit match against Indy Eleven on Saturday, March 22 at Cardinal Park and the proceeds from the event will benefit Family Scholar House. Pretty cool.

U of L announced Tuesday that it would be part of a $320 million Digital Manufacturing and Design Innovation Institute in Chicago.

Mick Cronin talks Louisville and the AAC in general with USA Today.

Q: Another top team in the league, not surprisingly is Louisville. You've coached under Rick Pitino in the past and have played against the Cards more than a few times before in years past. What do you see out of that team this year? You two have had a pair of very memorable games this year.

A: They're getting better as the year goes on. Like anybody else, you go through your injuries, you go through your adversity, whatever that might be. You come out here at the end of February and you're going to be as good as your leadership takes you. They've got two great leaders, two great seniors in Luke Hancock and Russ Smith. Those guys are big-time shot-makers. They've been to the mountaintop, so nothing's going to rattle them. They don't play against anybody who has two better perimeter players than they do, or two more experienced guys than they have. You combine that with the rest of the talent on that team, and they're going to be a tough out for anybody.

Jody Demling is back with his weekly U of L baseball notebook.

After a breakout season in 2012-13, Russ Smith is thoroughly enjoying his encore.

Some good news for former Cardinal running back Jeremy Wright.

Louisville peaking at the right time is all part of Rick Pitino's master plan.

It's the biggest weekend of the season in the AAC.