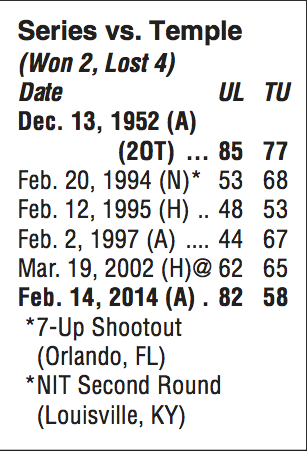 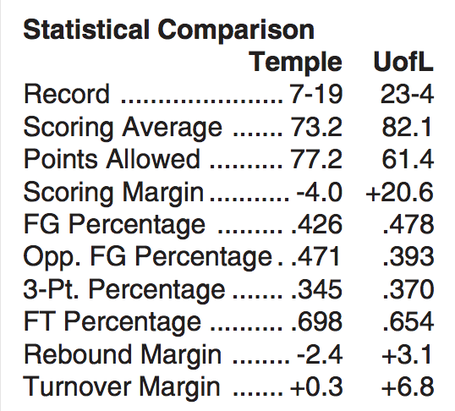 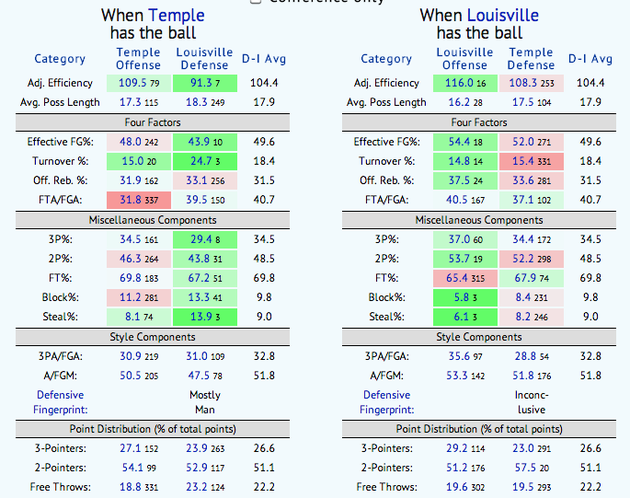 Fran Dunphy's teams are known for playing their best basketball near the end of the season, and that reputation seems to be holding true with this group of Owls. Since losing to Louisville at home on Valentine's Day, Temple has defeated No. 23 SMU and took No. 22 Memphis to overtime before falling 82-79 at the FedEx Forum.

Temple is one of five teams in Division I to have four players averaging 13 or more points per game. Senior guard Dalton Pepper, who scored a career-high 33 points against Cincinnati on Jan. 26, leads the Owls in scoring (17.2 ppg, 4th AAC), three-pointers (2.8 pg, 2nd AAC) and three-point percentage (.385, 13th). Pepper scored 24 points in the Owls' victory over SMU on Feb. 16, its first over a ranked foe this season. Junior forward Anthony Lee (13.8 ppg) leads The American in rebounding (8.8 rpg) and has 10 double-doubles this season. Temple is 30th in the nation in fewest turnovers per game (10.4).

--A win by Louisville will give the Cards just their seventh undefeated February in 100 years of basketball. U of L last accomplished the feat in 2008.

--Louisville is second in the nation in turnover margin (+6.8) and is 21st in fewest turnovers per game (10.2). U of L has committed 10 or fewer turnovers in 19 of its last 30 games dating back to last year. The Cardinals are generating an average of 21.6 points per game off turnovers.

--Temple has lost 20 straight road games against ranked opponents, a streak which dates back to January 2001.

--Thursday's game will be Temple's fifth straight against a ranked opponent, the first time in program history the Owls have ever gone though such a stretch.

--Louisville ranks third in the nation in steals per game (9.6).

--Louisville has held eight of its last 11 opponents to under 40 percent shooting from the field. The Cards held Cincinnati to a season-best 28.6 percent in their last game.