While building a security checkpoint in Afghanistan, Capt. Pavan Balaji got the contractors to convert to Cardinalism.

Earl Clark is headed to the Knicks.

New York? Maaan, I don't think I ever been there before.

5. Oakland Raiders - Teddy Bridgewater, QB, Louisville -Some questions arose about Bridgewater at the combine. Are his hands big enough? Why did he say he'd run the 40 and then suddenly back out? Even though those and some other issues have come up with Bridgewater, Oakland's need for a franchise quarterback supersedes them.

13. St. Louis Rams - Calvin Pryor, S, Louisville - This is a pick I'm locking in on more frequently. Pryor is getting the edge over Alabama's Ha Ha Clinton-Dix as the first safety picked because of his versatility and absolute aggression on defense.

The Louisville baseball team improved to 6-2 with a 6-0 thrashing of Eastern Illinois. The Cards' scheduled game for today has been postponed because of the weather.

A quick trip around the AAC hoops world.

Russ Smith was the featured guest on the taping of the Scotty Davenport Show last night, and also spent some time with the CSAA 8th grade champions from Notre Dame Academy. 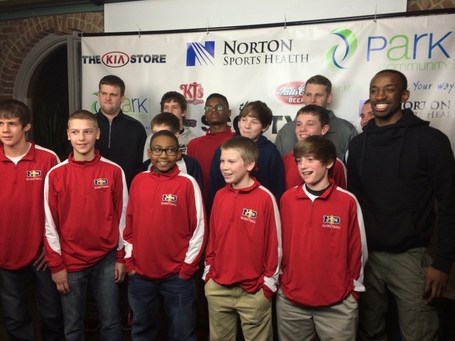 The fine folks from Strait Pinkie will be giving 100 #NoShaveTillDallas shirts away at Addis Grill (on 4th and Main, a block from the Yum Center) before the game against Temple on Thursday.

Bobby Petrino has been busy searching for a future quarterback on the left coast.

SB Nation has U of L as a five seed facing old Big East foe St. John's in its latest Bracketology. Despite its lofty national and non-RPI computer rankings, five remains the average seed for Louisville in mock brackets across the Internet.

The "Louisville quietly rending towards another national title run" features are starting to flow like rain now.

Pitino knows how to handle his minutes, and he knows pacing his team to have it playing its best basketball as February turns into March is as important as any ranking or seeding might be in the tourney. The Cardinals are built for this time of year, and the fact they have beaten just one ranked team this season is more an issue of the schedule as anything else. They will two more opportunities to build in that area with road trips to Memphis and SMU coming up the first week of March, and The American Tournament will help polish this team's credentials as well.

Louisville might not be the favorite this year, but the Cardinals have be considered a dangerous team, one that will have every opportunity to win another title this season.

Overlook them at your own peril.

Class of 2015 point guard Justin Simon has received a scholarship offer from U of L.

Louisville is up five spots to No. 8 in the latest power rankings from ESPN.

The Academy Award-winning Three 6 Mafia (minus Juicy J) will be in Louisville on Sunday.

Former U of L futboller and MLS top pick Andrew Farrell spends some time with the Harlem Globetrotters and talks about Louisville.

Kurt Warner says Teddy Bridgewater is the most NFL-ready quarterback (video) in the draft.

Jeff Walz has been named an assistant coach for this summer's USA National U18 team.

Calvin Pryor is one of the biggest names on the Rams' radar.

The Washington Interscholastic Athletic Association is attempting to keep Shaqquan Aaron and his Rainier Beach squad, the No. 2 ranked team nationally, from playing for a national title. Naturally, it's not news that is going over particularly well in Seattle.

Beach denied a monumental opportunity to compete for a national championship by WIAA. Come support y'all! pic.twitter.com/bzTT1P2Cdk

And finally, an early Louisville-Temple preview in preparation for tomorrow night's game.