Louisville 58, Cincinnati 57: An Afternoon To Remember

Share All sharing options for: Louisville 58, Cincinnati 57: An Afternoon To Remember

My initial thought in the wake of what transpired Saturday afternoon in Cincinnati was, "this changes everything." I decided to let some time pass before writing this for fear of recent emotion leading to reckless overstatements, so almost two days after Russ Smith's jumper ripped through the net inside Fifth Third Arena, allow me to begin with the following: this changed everything.

Forget finally beating a ranked team or the NCAA Tournament seeding and AAC regular season title implications; all that stuff is huge, but I think this team really just needed something, for lack of a better term, cool to happen. And not "lots of crazy dunks against Rutgers" cool, but "lead story on SportsCenter" cool.

People forget that up until early March, the major knock on last year's team was that it didn't have a killer instinct and that it couldn't make big plays in the closing moments of close games. That all changed with Luke Hancock's corner three at Syracuse, and I think Russ' shot could wind up having a similar effect on this year's Cards.

I'm not saying this team should now be the favorites to win it all or that every one of the questions we had before the Cincinnati game has been answered, I'm just saying that this was a necessary step for this group to take if they want to accomplish what last year's team did. It had to happen, and it did.

March is five days away, and the Louisville Cardinals are undoubtedly a national title contender. This changed everything.

For all the folks asking for Paul Rogers' call of the final shot, here it is.

The one thing that I always hated when I was growing up was that there was never any way to hear Paul Rogers' call of a big moment unless the news used it later that night. Sometimes the Internet is pretty awesome.

We talked about it last week, but this is the time of the year when you lean on your All-American if you have one. If Louisville's All-American doesn't step up on Saturday, it loses yet another heartbreaker, and the "can't win big games" narrative probably persists until at least the AAC Tournament.

The crazy thing about the final minute is that it didn't seem like we were going to get any heroics from Russ. With Cincy rallying and U of L desperately needing an answer in the closing segment, Russ fell on a drive and turned the ball over, and then dribbled the ball off his foot two possessions later. He then completely changed the tide of the game by being a distributor...just like we all predicted.

The first pass for the open Trez dunk was more of a UC mistake than it was a terrific find by Russ or finish by Harrell, but that second pass was a work of art best appreciated with a prime cut of meat and a glass of fine wine. A year or two ago, Russ either forces that shot in the lane or he attempts to make that bounce pass a second earlier and turns the ball over.

That play, of course, set the stage for Russ to...beat Louisville? 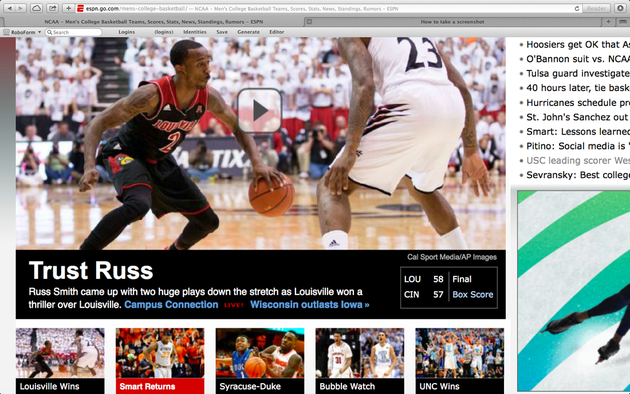 I guess it was that good.

The other reason the final minute was so important is because if U of L loses in that manner, I'm not sure they come back from it. Bad fouls, missed free-throws, Luke Hancock's wild shot, the Chris Jones to Russ simple pass gone awry; it was a performance that was going to result in the word "meltdown" being tossed around liberally, and the players' body language showed that they were well aware of it.

Following that Jones turnover, he threw his arms down and yelled something at Russ. Pitino, who was planning on keeping Chris in the game, then yelled at Jones, who yelled something back. Terry Rozier was quickly sent to the scorer's table.

Pitino then spent the entire subsequent defensive possession (with UC up one and two minutes to play) in the face of Jones. But he wasn't berating him, it was more of a forceful, "you've got to stop pouting after mistakes, it's time to step up" deal. He then sent his point guard right back into the game.

If you've watched the video of the game-winner no less than 75 times like you should have by now, you'll notice that both Jones and Rozier barely flinch after it happens. Rozier falls right back to defend the long pass on defense, and Jones goes to defend the in-bounder. The latter gets the key tip to end the game and then does his best impression of Michael Jordan after hitting the shot over Craig Ehlo. It's awesome.

Again, the final minute on Saturday could not have been more important.

For a split-second, everyone in that building, myself included, thought that game was going to end with a forced jumper by a double-teamed Terry Rozier. What other freshman have we had in recent memory who makes that pass? The kid's going to have a big end of the season and an even bigger 2014-15, but here's what really makes him special.

The conversation shifted to a topic that Rozier is all too familiar with: Some fans, not all, have called for Rozier to receive the lion's share of minutes at point guard in place of Chris Jones. Jones, the junior college player of the year in 2013, has had his ups and downs. He struggled in the final three minutes, posting a turnover and a foul.

But Rozier wasn't having any of it. He referenced the stretch when Jones and Rozier combined for 15 points on 5-of-6 shooting, with four assists and three steals.

Louisville coach Rick Pitino turned to those two and Russ Smith in the final minutes. He had to, with Hancock fouling out at the 1:40 mark.

"Chris is Chris," Rozier said. "He's always going to play hard. He's got that little edge about him, that's what I like. We work each other so hard. People can talk all they want, but they don't know how hard we practice and how hard we got at it and make each other better. We're not competing with each other. We don't care who's starting or not. You saw what we did out there together today. We just want to keep that going. We don't really feed into what other people say. He's a great player. We make each other better."

That is the type of stuff you have to have. Guys like Rozier are the reason the "Louisville First" attitude that has led to so much success is going to persist for at least the next handful of years.

I was surprised at how vile the Cincinnati response to the Kilpatrick free-throws post was last week (it was the lead topic on Cincy radio Friday afternoon), but then I heard a "F--K LOUISVILLE" scream just before the start of the National Anthem and the surprise wore off. Between that, the kids painted up to spell "Loservi," the students having to be told not to throw items on the court and throwing their rally towels at our players after the game; it was about the most enjoyable away game experience I've ever had. It didn't even bother me that the drive home took three hours. It was like anti-Indianapolis trip from 2009.

That said, Saturday was also without question one of the most intense game environments I've ever experienced. The throwing stuff was over-the-top, but the UC students definitely brought it.

Without question, the best part: 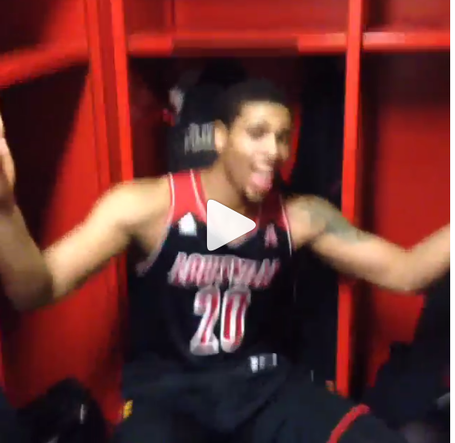 Speaking of Wayne, of course when he finally finishes on a great drive to the basket at a key moment in a big game, not only does he not receive the satisfaction of seeing the ball go through the net, but he's on the wrong end of what might have been the most egregiously missed goaltending call of all-time. Classic Wayne luck.

The best part about Wayne's block was that it came at a moment where everyone was about 99 percent sure that Sean Kilpatrick was either going to score or get fouled again. Once he got around both Rozier and Trez, there was this sense of impending doom, and then Wayne comes out of nowhere to make the defensive play of the season so far.

Again, it's these little things that happen in the closing weeks of the regular season that change everything.

This was the first "think about the game all day and smile" situation we've had since the national championship, and I'd almost forgotten how great it feels. It was also a top five "jump and hug everyone around you" game experience. A big shoutout to all those hug recipients as well as the people I shared awful high-five attempts with. I regret nothing.

We could spend six or seven paragraphs on the officiating, but we're not going to because everyone knows it was atrocious and everyone knows which calls would be talked about.

I will say that the one thing that bothered me more than any of the blown calls was what took place following the half hour "ball off whose foot" review session. After the first monitor huddle, the referees break and the lead official (Mark Whitehead) comes to midcourt and makes this real demonstrative gesture towards Cincinnati's basket. The place goes nuts. After the second monitor huddle, the officials break, one of them grabs the ball, they start walking towards U of L's basket and two of them casually point in that direction.

A Cincinnati student got to attempt a halfcourt shot during the first half for some sort of prize. He came up about 25 feet short and immediately made the choke gesture in reference to himself. It was embarrassing.

The front of the C-J's sports section from Sunday morning included a great shot. 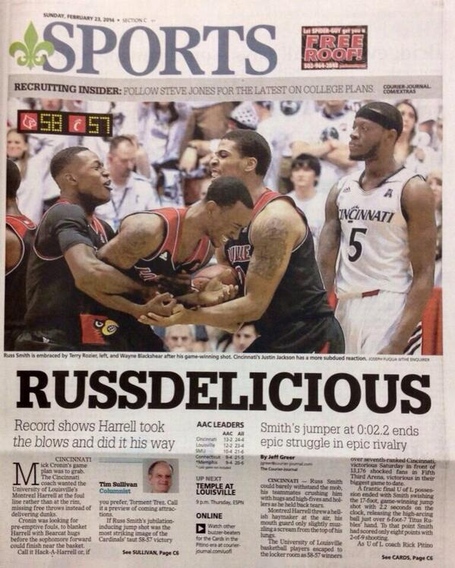 Yes, the free-throw shooting has to improve (for everyone, not just him), but Montrezl Harrell could not have come up much bigger in a situation where his team had to have him. He defended, he rebounded, he scored when the game was on the line and, perhaps most importantly, he stayed out of foul trouble in a game where his squad had virtually no shot if he wasn't on the floor.

If UC and Louisville meet in the AAC Tournament (would likely be the title game), it would be the 100th game of the series. It would only be right.

Foul trouble kept him from being able to do more, but I thought this was one of Mangok Mathiang's better performances during the time he was on the court. He's really quietly gotten a lot better over the past month or so, which isn't just a huge development for the next couple of seasons, but for this one.

Again, we don't need both he and SVT to be better than their averages every night out, just one of them. Although both would be cool too.

A lot of people have mentioned Rick Pitino's decision to go against logic and keep David Levitch on the bench for the duration of the game. I don't know what to say, Hall of Fame coaches often roll the dice. Sometimes it works out, sometimes it doesn't. Saturday it worked out. 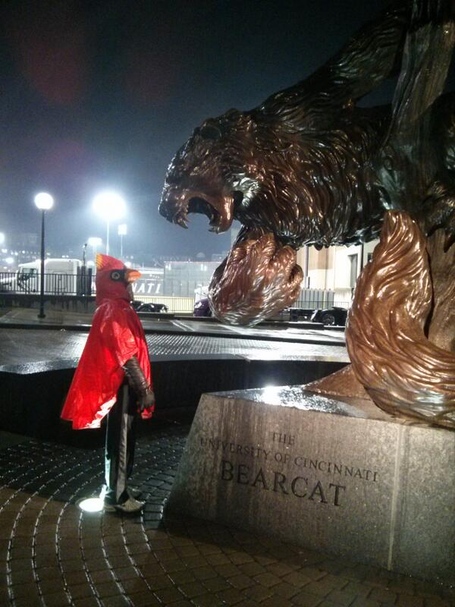 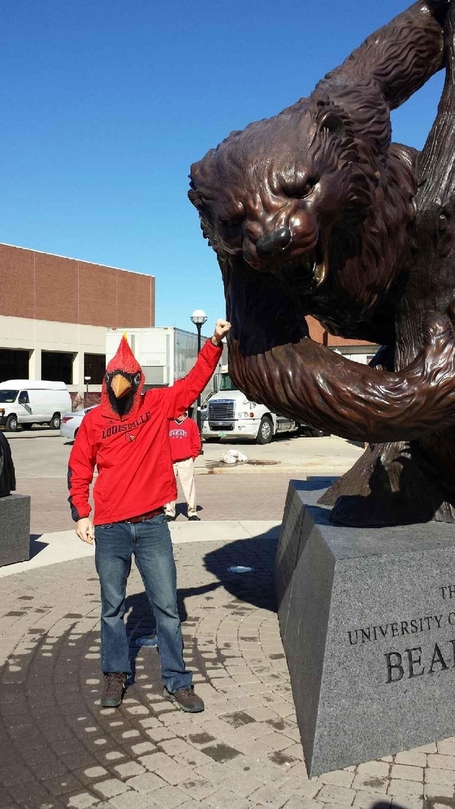