That's outgoing Mr. Cardinal Maxwell Morley passing the torch to the new Mr. Cardinal, Matt Smith, in the only fashion appropriate for such an occasion.

A very big congratulations to Peyton Siva and his wife, Patience, who announced on Sunday that they are expecting their first child.

Russ is making great decisions in crunch time and hitting game-winners, Gorgui is going off in NBA games and Peyton is having a child...they grow up too fast, man.

Forbes says Louisville might be the nation's premier basketball/football program.

I purposely saved a particular team for last. If you count winning a national championship as a trump card, then Louisville is your team. They've been college basketball's best over the past three seasons. They won the NCAA tournament last season. They are currently 5th in the USA Today Coaches poll, and finished 4th in the 2011-2012 season. In football, under now-departed Charlie Strong, Louisville finished the last two seasons 15th and 13th respectively. They did not make the top 25 in 2011-2012. So the football program has not achieved at the level of MSU or OSU. If you give more weight to football, therefore, Louisville is not your best. But extra weight to the championship gives Louisville a reasonable argument for being the best among the two sports, especially if you discount the Ohio State undefeated football season due to probation.

Speaking of which, it was just another weekend for the Mini Keg of Nails. 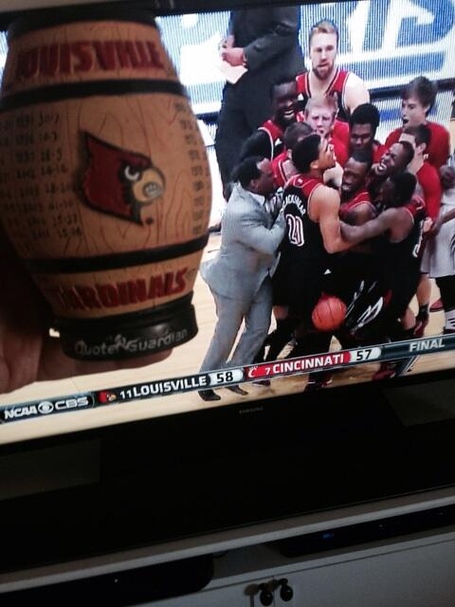 Despite being ranked No. 7 and No. 4 in the latest polls, Louisville is still just a five seed in Joe Lunardi's latest Bracketology. The cool thing about that, though, is that it actually doesn't matter at all.

I know...they don't tell you that when they post those things.

USA Today says people are sleeping on Louisville, which is foolish.

Of course, going into the season there was plenty of back-to-back hype for this squad. While Louisville's four losses - North Carolina, Kentucky, Memphis and Cincinnati - weren't particularly glaring, the omission of a key victory was missing from its résumé up until Saturday. In USA TODAY Sports' latest bracketology projections, Louisville holds a No. 5 seed and much of that is drawn from the team'sRPI of 27 and SoS of 96.

We can dissect the Cardinals' NCAA tournament credentials all we want, but let's not ignore the potential here. Russ Smith has matured and changed his "Russdiculous" game for the better. Junior college transfer Chris Jones has been a capable replacement for Peyton Siva at the point guard position. Montrezl Harrell has blossomed into a productive big man on offense and defense and senior forward Luke Hancock is playing more and more like the Final Four MVP version of himself.

It's almost laughable to consider Louisville an underdog, but there's no doubt the defending champions have dodged much of the national spotlight.

No need for motivation, though. They've got beards for that.

You've been digging for way too long to make it out of that hole with a single bound, bro.

Former U of L assistant Sherronne Moore has landed at Central Michigan.

I can't speak for everyone else, but I enjoyed what Bridgewater had to say as much as or more than I've enjoyed anyone else who talked this weekend. When someone asked if he really was as obsessed with football as was rumored, Bridgewater said that even when he's playing Madden, he sees it as "mental reps." It was hard to tell just how serious he was. He didn't commit to playing with a particular team, and he didn't say he modeled himself after a particular quarterback, but when asked if he could be any quarterback in history, Bridgewater went deep. "If I could have a career like any NFL quarterback, it would be Johnny Unitas," Bridgewater said. Unitas also played at Louisville - 38 years before Bridgewater was born.

One of the more memorable lines from the entire weekend came when Bridgewater was talking about his initial recruiting process. He said he told every coach who was wooing him that he had a three-year plan for college: start as a freshman, be all-conference as a sophomore, and graduate as a junior. When he did all that - and more - by the end of this past season, there didn't seem to be a reason to stay. "I looked back and I asked myself, ‘Was I able to accomplish all of those goals?'" Bridgewater said. "And as I look back, I was. I have my degree, a degree in sports administration from the University of Louisville, I was a three-year starter, won a BCS game, and won conference player of the year." Soon, we might be adding "no. 1 overall pick" to that list.

Nothing discreet about that man's charm.

Gabe Duverge over at The Cardinal Connect did some research on past scoring margin leaders in college basketball (Louisville currently leads Division-I by a solid margin), and found that five of the last 10 teams to own the title have gone on to win the national championship.

Eric Crawford says that the U of L women's team's easy win over No. 25 Rutgers on Sunday shows just how far the program has come.

The official Kentucky Derby Festival poster for 2014 is out, and I'm kinda digging it. 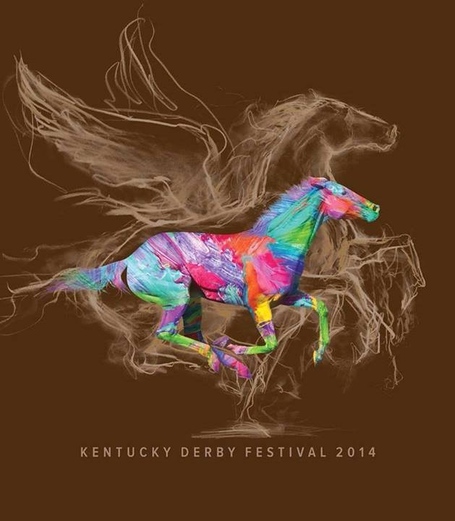 Solid nugget from Rick Bozich: Rick Pitino is 13 wins away from No. 700 for his career. If Louisville were to win out this season, victory No. 700 would take place in the national championship game.

A quick message from a new group at U of L aimed at the ladies:

The Louisville Belles is a new group for women who support the University of Louisville, in particular our student-athletes.

Our mission statement is as follows: To support the academic and athletic efforts of UofL student athletes and to provide women in the Cardinal fanbase an opportunity to connect with each other through social events and University support functions.

We have no dues and anyone can join.  Men will be welcome at gameday events, but we want to give women a venue where they are not intimidated or overshadowed.

We are having an informational meeting Thursday, February 27th at 6 PM at the Cardinal Café.  Please tell everyone to come and bring a friend.

The Austin American Statesman chronicles the wide variety of emotions that people in Louisville have had regarding Charlie Strong's departure. It's a long read, but it's worth your time.

Louisville wasn't the only local team to earn a huge victory via a buzzer-beater on Saturday, as Spalding locked up its second consecutive St. Louis Intercollegiate Athletic Conference (SLIAC) regular-season championship in this fashion:

The ACC football championship game will remain in Charlotte through 2019, conference Commissioner John Swofford announced at a press conference on Monday.

Mine is starting to get gross, but there's no turning back. 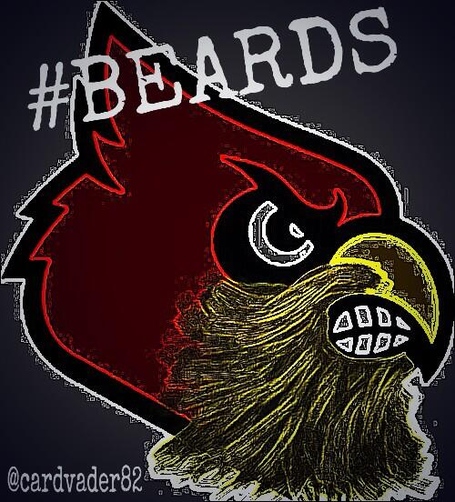 Interesting fact from the Sporting News' Mike DeCourcy: Rick Pitino, John Calipari and Larry Brown are all coaches who figure to coach teams in the NCAA Tournament this season and who currently own six game winning streaks in the big dance. I would guess that has never happened before.

Good stuff from Marcus Smith at the combine on Monday.

And finally, I'm back on the radio with Mark Ennis tonight from 6-8 on ESPN 680.