February up to this point has been a fun five-game stretch filled with blowouts, records and some comedy. I think I speak for all of us when I say I'm glad this is about to change.

Louisville is about to enter the "every game (besides Temple) feels like a bowl game" portion of the season that we've all become so accustomed to at this time of the year, and I couldn't be happier.

The worst part about the Cincinnati loss is that we all knew exactly what the next 22 days would hold. Louisville was probably going to beat up on the bottom half of the AAC, and the rest of the country was going to keep taking about U of L's inability to succeed in its biggest games. Credit the Cards for maintaining the focus necessary to fulfill the first part of that prophecy, but the latter half has been more than a tad tiresome to experience.

The next five weeks will see Louisville play four games against teams that will probably make the field of 68, shoot for their third straight conference tournament championship, and then began their quest to defend their national title in the NCAA Tournament.

The most wonderful time of the year in Louisville has arrived, you guys.

Russ Smith passed Wes Unseld Tuesday night to crack the top 10 on U of L's all-time scoring list. Imagine reading that line three years ago. I would have given better odds to future me typing the line "Samardo Samuels prepares to win second straight Best Actor Oscar" and not thought twice about it.

Russ played 30 minutes or fewer for the second straight game, but his world is about to change just as significantly as his team's. He could have played 35 minutes and scored 35 points in either of the last two games, but Rick Pitino knows what's ahead. From this point forward, Louisville's not going to be able to win without its star being on the court 90 percent of the time and putting up Russ-esque figures.

This is the time of the year where if you have an All-American, you lean on him. The spotlight will be right where Russ wants it for the rest of the season.

Montrezl Harrell also wrote some history on Tuesday, breaking Pervis Ellison's single-season dunks record, and then adding to that number with a pair of additional crams.

When asked how many dunks he thought he could finish the season with, Harrell said he was shooting for triple digits. He then attempted to explain how he could achieve that feat, a response which produced the vine of the season so far (via WDRB's John Lewis).

With this performance coming on the heels of his David Levitch interview cameo, I think we're going to need "Chris Jones reacts to teammates' locker room interviews" videos from after every game going forward.

The Rondo-esque fake behind-the-back pass for a lay-up got him on SportsCenter, but it's just how often he's in the right place and how often he makes the right move that impresses me the most when it comes to Terry's game right now. He's probably going to go off from the outside in one of Louisville's biggest games before the end of the season and get a lot of love for it, but it's the rebounding, the thefts and the getting the ball where it needs to be in a timely manner that's making him such a valuable asset on the court.

We all thought he was going to be pretty good, but I think he has the potential to be better than any of us could have imagined.

My favorite part of this is that it will finally put to bed the "I didn't know Luke could dunk" tweets and comments. He can. He also shoots it pretty well.

Pretty excited to see how the beards look at the one week mark, especially on Mike Balado, who is beginning to resemble Hugh Jackman's Wolverine.

You'd like to see him get closer to 10 rebounds, but this still may have been Mangok Mathiang's best game in conference play, because he was aggressive on the offensive end and held his own on defense. I get that South Florida's post game isn't exactly elite, but on thee separate occasions Mangok was defending a Bull player one-on-one, and that player didn't score in any of those instances.

Mathiang's performance comes a game after Stephan Van Treese produced one of his best efforts of the year. If we can just get one of those two guys to post numbers above their averages every time out, we're going to be okay down low.

This was the second time this year (at Houston being the other) where the CBS Sports Network broadcast team called a game that was never in doubt as if the lead had changed hands 45 times. South Florida never got closer than 12 in the second half, but still we constantly heard about how they were "just down 14" and how Louisville was "in a little bit of trouble."

I also did not appreciate Steve Lappas implying that David Levitch is a bad teammate who is secretly shaving. That's what locked up worst broadcast of the year honors.

Luke and SVT seem to have a great feel for where one another are when they're on the court together. I suppose there's come correlation to how close they are off the court, but it's hard not to notice the chemistry they play with when they're both out there.

Another foul fest for Wayne, and three of his four were really bad. He has to figure out how to keep himself out of these situations, but he also can't be a passive defender.

The key for Wayne, I think, is just accepting when he's beaten and taking the lashing from coach Pitino. When Wayne's gets beaten on a drive, he hacks. When he's late helping, he tries to take a charge when he knows he'll never get the call. When he's out of position for a rebound, he goes over the defender's back. This needs to stop. His presence on the court is too important going forward.

The Victor Rudd fastbreak windmill dunk reminded me of this classic moment from DePaul Day 2009 (please note the score).

Congrats on your cool highlight.

A handful of people made the comment during the game that Josh Heath looks a lot like Peyton Siva. I have no idea how you could look at that kid and see anything other than the fact that he is the spitting image of his father. It's almost creepy, to be honest. 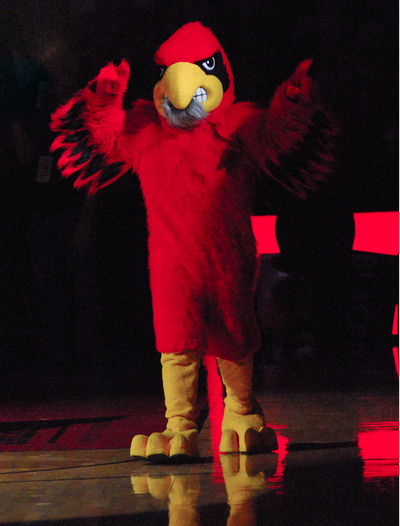 I really enjoyed Russ' approach to this game: score a lot of easy points early on to put the game out of reach, then spend the rest of your time working on the crazy dribbles you're too afraid to try out in games that are close. It was a mentality that drew not one, but two "do it again and you're done for the night" comments from Pitino.

It didn't take long after the final horn had sounded for the focus to make a shift in the proper direction, as Chris Jones told reporters that he didn't like the way Cincinnati celebrated in the moments after their win at the Yum Center last month.