I'll be perfectly honest, I have no idea where to start here.

Sunday night (which is an odd thing to say at the beginning of a non-tournament game wrap anyway) had the one-sidedness of a pre-Christmas game at the Yum Center, only it came in mid-February against a conference opponent. The result was perhaps the most enjoyable evening of the season on a night where it seemed like there wouldn't be all that much to get excited about.

It was a little weird and a little funny, but mostly it was just fantastic.

The criticism of Louisville's performance in its biggest games this season is warranted (for the time being, at least), but you also can't simply dismiss the fact that the Cards aren't just beating the teams they're supposed to beat...they're humiliating them.

Mind-boggling losses and narrow victories in games with double-digit spreads are the norm at this point in the college basketball season, but U of L has never appeared to be "sleep-walking" through a game or overlooking an opponent from the bottom half of the AAC. It speaks volumes about both the focus and the maturity of this squad, which is a pretty big deal considering that leadership was supposed to be one of the Cards' most pressing issues heading into the season.

The veterans on this team aren't content to rest on the accomplishments of last season, and the newcomers are locked in on the goal of tasting that same success. Both of those things are necessities for Louisville's hopes of repeating.

All right, let's get to the real story.

David Levitch buried a three, scored a career-high four points, threw a gorgeous no-look pass to get Louisville to the 100-point mark for the first time this season, and was referred to multiple times as "the baby-faced assassin" on national television. Rick Pitino mentioned him in his opening statement at the postgame press conference, the first question Pitino was asked was about Louisville's unblemished record in Levitch games, and Paul Rogers name-dropped CC and the Levitch stat during the game.

Levitch also gave a spectacular postgame interview, which includes a cameo from "Dieting Chris Jones," who is slamming a kit-kat on the right side of the screen.

Kent Spencer's postgame story for WHAS is also very worth every second of the 1:24 commitment.

The nicknames are all great, but I think "Pistol Levitch" might actually be my favorite...but only if you say it in the Pitino voice and with a sly grin.

It wasn't featured in any of the videos, but Levitch did talk a little bit about how it's kind of hard coming into the game late with everyone cheering for you to shoot whenever you touch the ball. It's impossible to get into any sort of flow until you at least make a free-throw, which is exactly what we saw happen Sunday night.

Obviously the Levitch love is fueled by the fact that he's the last guy off the bench this season (as well as a strong admiration for tremendous hair), but all of that masks the fact that the kid can play. This role won't be a permanent one, and he'll have an opportunity to get legitimate minutes in a couple of seasons.

He's not as big or as quick as Tim Henderson was when he was a freshman, but he's more skilled and a better shooter than young Hendo was. It's safe to say that Henderson is going to be remembered long after his playing days here are over, and not just for being a lovable (former) walk-on. Eventually, Levitch is going to get that same opportunity.

Also, Louisville is now 13-0 in games where David Levitch makes an appearance.

How incredible is it that Rick Pitino is not only willing to grow a hideous (let's be honest) four-day old beard that he knows the rest of the country will see, but that this whole thing was his idea?

Close up of Pitino's new beard. He says: "If you're worth any grain of salt, all of you WOULD join in!" #Challenge pic.twitter.com/R1eP6YJH2k 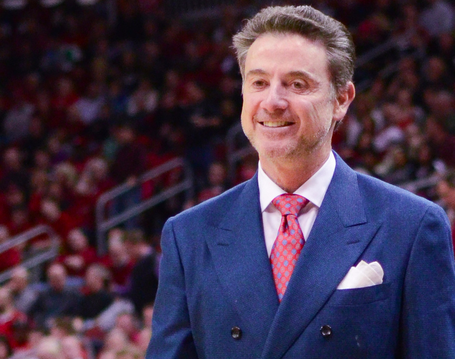 Forget about Kentucky Rick Pitino or Boston Celtics Rick Pitino, I don't think 2008 Louisville Rick Pitino even considers doing something like this.

Once again, Louisville Rick is the best Rick, and his evolution is one of the biggest reason why this has been not just one of the best stretches of Cardinal basketball ever, but also one of the most fun. The last four seasons have been, without question, the most enjoyable I've ever experienced, and that's not entirely because of the on-court success.

The only negative I can think from Sunday is that Montrezl Harrell didn't break the single-season dunks record. Had Chris Jones put just a touch more on that fast-break alley-oop, he would have done so in style.

I think it's still pretty safe to assume that Pervis' record will not be standing at the end of the season.

The only thing keeping Trez from the dunk record might be Stephan Van Treese, who has apparently decided to make a late run at the title. Those three blocks were a nice little accent to the above-the-rim performance.

It was a career-high for both Luke Hancock and Non-Undershirt Luke Hancock ("NUH"), who continues to set the AAC on fire. The crazy thing about Luke's 6-of-8 shooting performance from three is that his outside shot still looks so much different than it did a year ago. It's like he had to change it just a little bit during the summer, and now he's fully adjusted.

Of course it wasn't all roses on Sunday. 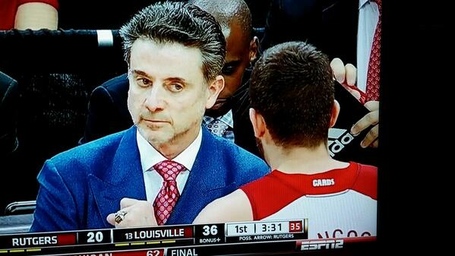 Despite all the great moments that happened because of positive things, this might have been the highlight of the game.

I still think this team goes as far as the quartet of Luke, Russ, Trez and a random big performer on a particular night can carry them. Russ has to do Russ things, Luke has to keep being both a creator (an area where he's criminally underrated) and lethal from the outside, Trez has to clean up around the rim and be a legitimate scoring threat in the post, and then one of the other guys has to give us even more than we're expecting on that night.

Several people have remarked that Russ didn't look very happy during the end of the game, but honestly I think he's just bored. I know he was frustrated during the dull non-conference stretch at the beginning of the season, and my guess is any perceived dissatisfaction is the product of that same type of frustration.

Sophomore Russ was always smiling because he was elated that he was finally playing significant minutes. Senior Russ has been a star on teams that went to the Final Four and won a national championship. He's going to have fun when the situation calls for it, but he's also more about taking care of business and acting accordingly.

Lost in the Levitch madness was Akoy Agau burying a contested rainbow jumper. It happened, and I enjoyed it.

1) Rutgers' Craig Brown summed up the Scarlet Knights' entire performance in one picture. 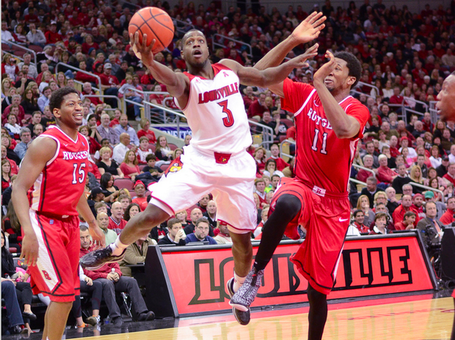 2) Wayne finally figured out a way to keep himself from getting called for ridiculous fouls.

On most nights, Terry Rozier's performance - which included a career-high 16 points - would have been the biggest story of the evening.

CBS Sports' Jeff Borzello, who was in the building for the game, referred to Rozier as the best NBA prospect on Louisville's roster, and I can see where he's coming from. Terry has that next-level combination of size, speed and bounce that we haven't seen from many Cardinal guards in recent memory. If his shot and his ballhandling continue to improve as much as they have over the course of this season, I don't think there's any question he can play in the league.

I've been hoping for another big run all season because (in addition to the obvious reason of always hoping for a big run) I've been pretty worried about there being a relatively steep drop next season. Terry being "unleashed" is one of the biggest reasons I'm not so sure that's going to happen anymore.

Rozier's also going to play a pretty significant role in any success the Cards have from here on out this year. It's easy to envision him having one of those 25 point NCAA Tournament games that no one sees coming.

The behind-the-back dribble on the fast break got a lot love, but I thought the reverse, between-the-legs dribble Tim Henderson pulled to get past his man in the halfcourt was even more impressive. He got into the lane with ease and probably should have taken a little floater that was available for him.

After Connecticut snatched it back last week, the AAC margin of victory record is back home where it belongs. Seriously though, Louisville has won conference games by 39, 39 and 48 points this season, and UConn won a game by 43. It's like the the top half of the Big East joined up with the bottom of the Big Sky for a season.

If you've ever wondered what happens when Luke Hancock gets hit in the face right after the opening tip...this is what happens.

The layoff was painful (literally, I hurt), but now I'm worried that I'm getting too attached to this "game every other day" phenomenon. Thankfully, it should become a bit of a trend over the next month and-a-half.

No shave 'til Dallas. Win for Hair.