With all due respect to the Montrezl Harrell dunk party and the Russ Smith doing pretty much whatever he wants on offense party, I think it's safe to say that the story of Valentine's Day 2014 is the news that the players and coaches have agreed not to shave until Louisville loses again.

Here's the story from Rick Pitino's own mouth:

On the excitement of getting to play finally/not shaving: It's been a long time. It's a good stretch. We all said, ‘Let's have some fun. Let's grow beards until we lose.' It's the first time in my life that I'm trying to grow a beard, and it's the first time I've looked in the mirror and seen multifaceted hair coming in, different colors. We want to have some fun right now, so we're going to do that and hopefully we can get on a little streak and grow some full beards.

On how many days' beard growth for him: The rest of the guys are three. This is two. I had to do a commercial, so it's just two.

As you might expect, it didn't take long for the photoshops and comparisons to start rolling in.

I get that the "playoff beard" isn't exactly a new concept (the team even said last night that they got the idea from the Red Sox), but the thought of Pitino, the players and a large portion of the fan base all having hideous beards at an NCAA Tournament game in six weeks is still pretty much the best vision ever.

The bigger thing is that this could galvanize the team in the same way that Pitino's tattoo promise did last year. It certainly worked a season ago and I like that we're going back and at least trying something similar. The "beard streak" itself is secondary to the fact that the entire team understands that there's a shared goal not to lose from this point forward. Of course that would be the goal regardless, but when there's a "deal" or "contract" that's shared publicly like this, it changes things a bit.

I think the players have been just as turned off as the fans have by this long stretch of time off and games against the bottom half of the AAC, so this is coming at a perfect time. Everyone's excited and everyone's thinking big again as the Cards head into a final stretch of the season that, all things considered, is probably going to be more difficult than the final seven games of last year's regular season.

It's hard to take too much away from Friday night because Temple has been such a disappointment this season, but holding the only team in college basketball with four players averaging at least 14.0 ppg to their second lowest point total of the season is still pretty encouraging. It's even more encouraging when you consider that the game was basically over at halftime, when the Owls had just 25 points.

Trez is now just one dunk shy of tying the U of L single-season record and he finished Friday with a career-high 22 points, but it certainly seemed after the game like Pitino was most excited about his four blocks. He said that the staff had been waiting for a defensive performance like that from Harrell, and to see it finally come as the team makes the turn for late February is very encouraging.

There's no question that this squad needs a rim protector, and Harrell becoming a legitimate recipient of that title would be enormous.

Russ could have scored 40 last night if he wanted to. There was not one Owl on the floor with any hope of containing him. 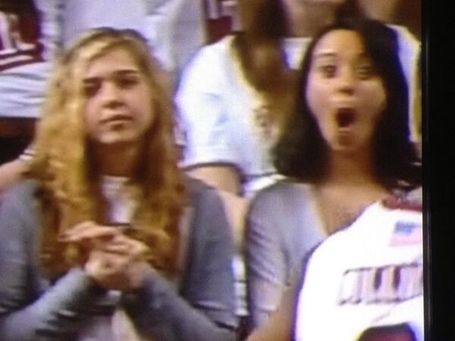 Again, it was Temple and they weren't exactly preoccupied with keeping Louisville from scoring, but Wayne getting into the lane and seeing a few of those shots around the rim actually fall has to be a nice confidence booster.

That was the worst attempted White Out known to man. Even worse than our 2012 attempt against Cincinnati in football, because there were more than 2,000 people at that game. You weren't fooling anyone by going the "drape the shirts on the seats" route.

Interesting to see Terry Rozier get just 10 minutes of run. I think Pitino knew this was a great opportunity to get Chris Jones some restored confidence, and he took full advantage.

Speaking of Jones, he posted a short Instagram video of the team singing Usher's "Burn" on the flight home last night, and it was glorious. I can't embed it here, but try and find it.

A few Chronicloids enjoyed their day and night in Philly. 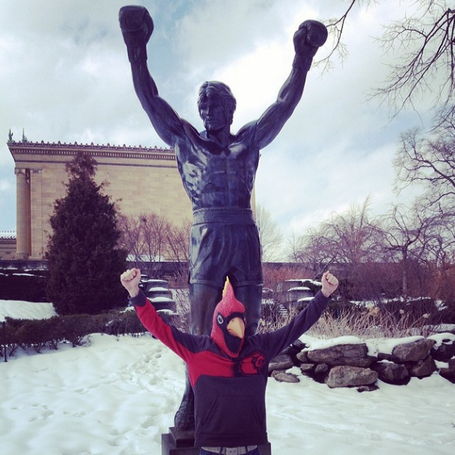 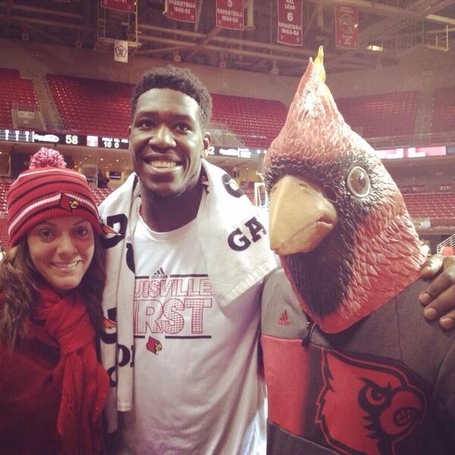 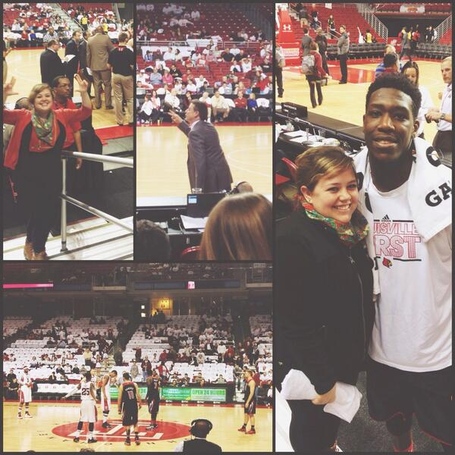 A big shoutout to Ms. CC for being cool with canceling dinner plans to spend Valentine's night watching Louisville play a 1-9 team from the AAC with some friends. It was a lovely holiday.

Yes, Valentine's Day ended exactly the way it should have: David Levitch drilling a heavily contested shot in the lane. We all love Levitch primarily because he's the last guy off the bench this season (and because of his hair), but the fact is he absolutely could have played for a low major Division-I program. If he puts on the necessary weight, he could get legitimate minutes as a junior or senior.

Also, Louisville moved to a perfect 12-0 in games where David Levitch makes an appearance.