I know we say "there always has to be one," but come on, dude on the far right, there really doesn't always have to be one.

So I wrote a column for The Voice-Tribune this week about how Rick Pitino should be removed from the Hall of Fame because he's not playing David Levitch enough. It's as ridiculous as you're imagining, with completely over-the-top rhetoric and quotes that I outrightly state are made-up.

Still, there were people (and not just a handful) who read all 1,000-plus words and took the column dead seriously. It was funny at first, and then actually super depressing.

@cardchronicle I like your theory, but how many points are we up by, on average, when he hits the floor?

@CardChronicle There are no words to state how bad this article was. Gandhi just turned in his grave being quoted for this.#sad

@CardChronicle @TheVoiceTribune laughable. I hope this is in jest if not you need to have your job revoked; you may have lost your mind.

It's a scary world outside the friendly confines of SB Nation.

Rutgers, whom Louisville is scheduled to play at home on Sunday (6 p.m.), has also had its planned game for this evening (against SMU) postponed until tomorrow.

USC transfer Max Wittek says that Texas should not be perceived as his front-runner.

Andrea Adelson's first ACC feature on Louisville says that Bobby Petrino gives the Cards hope in their debut season as a member of the conference.

Petrino gives Louisville even more cachet than it had a month and a half ago, when the Cardinals pounded Miami in the Russell Athletic Bowl, serving notice to the rest of the ACC. Of the nine teams that have changed conferences since 2012, three had first-year head coaches. Of those three, Petrino is the only one with previous head-coaching experience on the "power five"-conference level, and his experience came in the most powerful conference in America.

Not only that, Louisville brings with it a terrific track record of recent success, posting back-to-back 11-win seasons. In fact, four of the five 11-win seasons in school history either happened in the past two years or under Petrino. That makes Louisville better positioned for immediate success than former Big East mates Pitt and Syracuse, which transitioned into the ACC last year.

But there is little doubt that Louisville faces a steep rise in level of competition, one that raises many questions headed into the first season. Louisville has three teams on its schedule projected to start the season in the Top 25. The last time it had to play that many ranked teams in one season was 2008, when the program was struggling under Steve Kragthorpe. In the past five seasons, Louisville has played just four teams ranked in the Top 25 at the time of the matchup.

Now, the Cardinals will play Florida State and Clemson every year.

"The thing they've got a head start on us [in] is their tradition. They have a long history," Jurich said. "Our history is fairly recent, but our last 15 years we could go head to head with anybody in college football or any sport across the board. We want to make sure we continue to grow off that. We've got a good foundation in place and I don't want to say any more than a really good foundation. We want to keep building and building."

Good to have AA back covering the Cards.

Local group Brickyard Circle recorded a tribute to the Year of the Cardinal. You can listen to it here.

Facebook says that Louisville is the third best city in the country to find love. 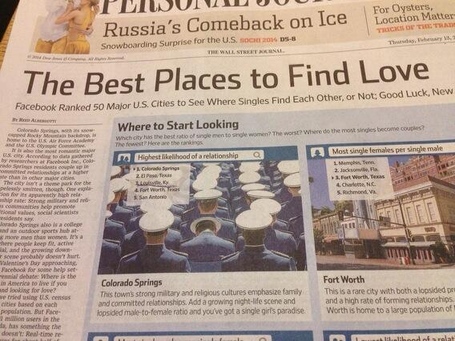 Along the same lines, I've seen and heard a lot of people stressing out about Valentine's Day this week. While it's too late to help you this year, I can go ahead and save your holiday for 2015.

Valentine's Day is easy. The key is to be completely stubborn and ridiculous about something really small that you don't actually care about during the rest of the year. An example for the guys: tell her you "don't believe" in flowers and refuse to back down whenever the topic is brought up. Convince her it's part of a personal code that has gotten you this far in life. It may cause a couple of absurd fights, but do not back down from this.

When you show up at her house with $20 flowers from Kroger on Valentine's Day, it will be like you're letting her see a part of yourself that no other human has been privilege to. She'll think she broke you, and she'll react like you just surprised her with a trip to Italy.

Same thing applies for the ladies. It's probably going to be physical, which is actually an easier play. Act like you're morally opposed to any tiny request you choose for 364 days, and then "give in." Easiest Valentine's Day ever.

I've been called the Hitch of the Louisville Internet community exactly once. It just happened.

Louisville is a five seed opening up against Harvard in Joe Lunardi's latest Bracketology.

The Cards are being pegged anywhere between a three and a 10 seed in bracket projections across the country, with their average seed being a five.

Very happy to see that DJ K-Dogg will be back The Oven for another year.

CARD NATION I'm Back! Coach P & @UofLFootball must be DMX Fans because I'll be back next season ROCKING "The Oven" RT pic.twitter.com/H09Jp9P3fw

"There's always opportunities," Jones said. "He probably felt like his opportunity was better, or they put him in a better situation. You never know what's going on, man. I know he loved the University of Georgia, he loved the guys he had there, but you never know why. I'm sure the guys there are going to love him. The fans at Louisville are going to love him. He brings so much energy to the game. The stuff he did for us at Georgia was great. He's got that demeanor about him, and it shows. We had the top defense and coach Grantham and his staff was the reason why."

As he did at Georgia, Grantham plans to change Louisville from a 4-3 to a 3-4 base defense. With the exception of last season, when the Bulldogs were a young, injury-laden group and the scoring defense was ranked No. 79 in the country at 29 points per game, Georgia's defense received high praise under Grantham during his four seasons as defensive coordinator.

If you haven't checked it out yet, Lord Kayoss has yet another solid DVD deal for you.

Philadelphia-based website City of Basketball Love previews tomorrow night's game. Although I don't think Ken Pomeroy is quite as confident in the Cards as he's listed as being in the opening.

This happened exactly 20 years ago today:

AA, how competitive do you think Louisville can be in its first season in the ACC without former coach Charlie Strong and former QB Teddy Bridgewater - especially considering it's stuck in the ACC's Atlantic Division with defending national champ FSU and Clemson?

AA: Louisville might be behind Florida State and Clemson at this point, but the Cardinals are ahead of everybody else in the division. Therefore, I think they have a realistic chance to finish no worse than third in the Atlantic despite the loss of Strong and Bridgewater. Finding a quarterback obviously is going to be quite the undertaking. Bridgewater is one of the best college quarterbacks I have had a chance to cover. If I was running an NFL team, I would choose him to be my quarterback in the draft this year. Without such a smart, poised veteran leader behind center, Louisville could struggle.

There are major personnel losses on defense that have to be addressed, too. But having said that, this team returns quite a bit of speed and athleticism, and that should be an advantage. I know many have knocked the strength of schedule in the American, and rightfully so, but I also saw Louisville absolutely whip Florida and Miami in back-to-back bowl games. This is not a flash-in-the-pan program. Strong did a terrific job finding talent and building a solid foundation. Petrino certainly knows how to develop talent and win in a difficult conference. I don't see another 11-win season, but I don't see a sub-.500 season, either.

The U of L women didn't exactly do it in style, but they did bounce back from their loss to Connecticut by taking care of Temple Wednesday night.

At least one of the teams is having some Rivalry Week fun.

The supremely gifted Ian Klarer is back with "The Evolution of Russ": 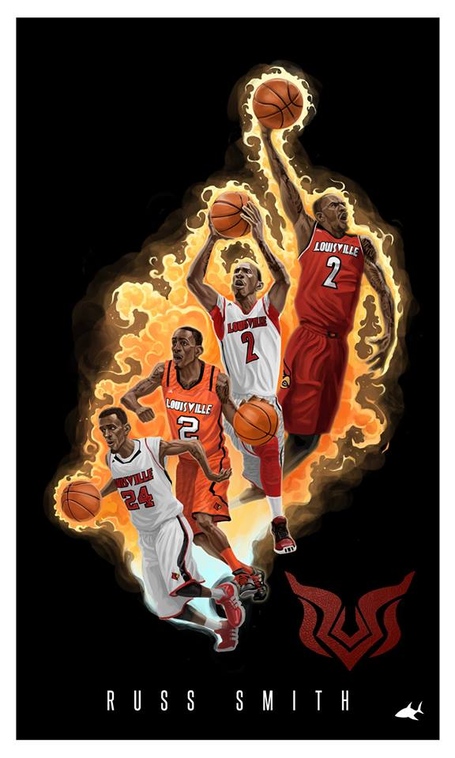 Sports Illustrated re-ranks college footballs recruiting classes of 2011 and has Louisville all the way up at No. 6.

You've probably noticed that Texas was in the original top 10 of Rivals.com's 2011 recruiting rankings, but that it did not make this list. The inclusion of the Cardinals should give Longhorns fans hope that Texas will appear here in the future. This was Charlie Strong's second recruiting class at Louisville, meaning that it was the first class in which he had an entire recruiting cycle to work. It included a program-hoisting quarterback (Bridgewater), a dynamo of a safety (Pryor) and the guy who would lead the team in receiving last season (Parker). It also featured plenty of other building blocks. Led by this group, the Cardinals won the Big East and the Sugar Bowl in the '12 season, and went 12-1 in '13.