A young, dashing Rob Minardi poses with DMX in a Cardinal fleece circa 2002. A DMX/Pitbull halftime extravaganza at the Labor Day football game against Miami is at the top of my to-do list.

Fact: The last time the Louisville men's basketball team played a game, their broadcast was immediately followed by a brand new episode of "Deadwood."

That's not really a fact. A station which carries Louisville basketball games would never be one which would also be the home for new episodes of a show like "Deadwood." I've actually never seen an episode of "Deadwood." Got the season one DVD for Christmas several years ago, but didn't want to to start and get emotionally invested because I already knew the series ended abruptly.

Annnyway, I'd enjoy watching a U of L basketball game again very soon.

Not too many details from Saturday morning's scrimmage have emerged outside of the fact that the team of starters won by 10 and Anton Gill was the game's leading scorer. He's also got jokes.

Also in attendance for the scrimmage on Saturday was our friend Gavin Howard, who you may remember has donated thousands of dollars to St. Jude's by selling his own shirts and sweatshirts. He and younger brother Grant were able to meet the team and get some signed gear. 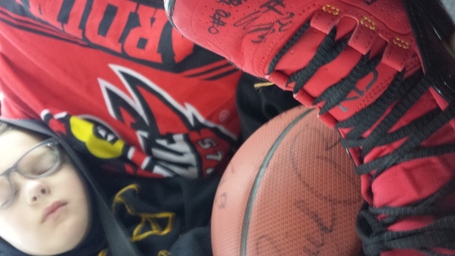 In related news, uhhh Levitch haircut? No idea how to feel about this and really wish all of us had been consulted first. 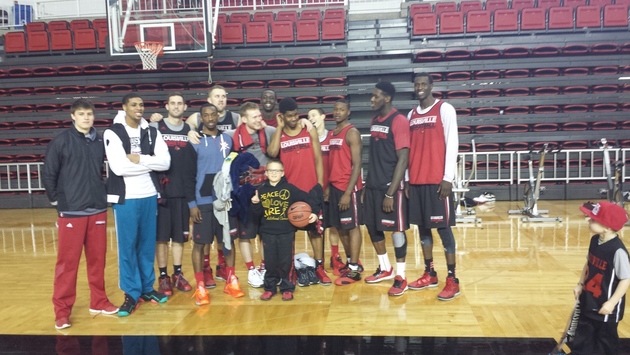 U of L is a No. 5 seed in Joe Lunardi's latest Bracketology, where they would potentially meet fourth-seeded Kentucky for a round of 32 game in Orlando.

Louisville is No. 20 in Football Study Hall's initial S&P Projections for the 2014 season.

"Being my toughest critic, it's also a good thing because when I'm tough on myself, I'm never satisfied. I'm eager to just get better each and every day.

It's pretty much the greatest conference ever assembled.

Your full promotions schedule for the 2014 Louisville baseball season is out, and I will be seeing you for Schedule Keychain Giveaway Night later this month.

Temple's game against Louisville on Thursday will be the first of five straight games against current AP Top 25 teams for the Owls. If those rankings hold, it would be the first time in program history that the Owls have ever gone through such a stretch.

Ryan Pitino has already received some solid national attention for his performance Saturday night in Minneapolis, but I couldn't, in good conscious, allow this post to be published without it including the following picture: 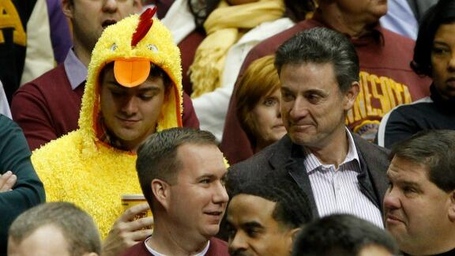 Richard may have won the game being played on the court, but he certainly didn't receive the biggest proud father look of the evening.

The best part of the story is that Ryan, who did not lose a bet, walked straight into Richard's office just before the game and said, "go get 'em, I've got to go change."

Bring Chicken To The Barn.

Louisville fell from No. 25 to out of the rankings in ESPN's latest way too early top 25 for next season.

The Calvin Pryor buzz continues to build with more and more mock drafts projecting Pryor to be selected in the mid-to-late first round. One of those is SB Nation's own Mocking the Draft, which has Pryor going to the Bengals.

More Pryor buzz on the front of CBSSports.com from a few days ago: 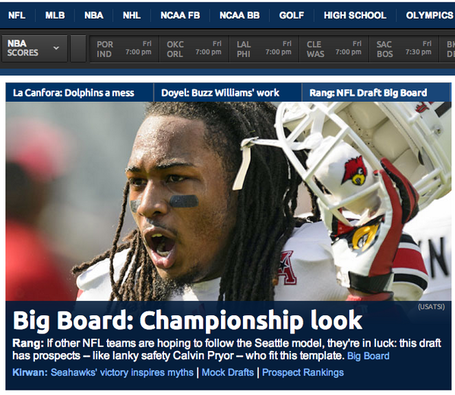 The U of L women's lacrosse team opened its 2014 campaign with a tough 14-11 loss to No. 6 Duke in the first meeting between the two programs. The Cards actually jumped out to a 4-0 lead to start the game before the Blue Devils kicked things into high gear.

@Ballard_Sports congrats on @QuentinSnider4 breaking scoring record! This Only the beginning of many great moments! #keepleading

Former USC quarterback Max Wittek plans to visit Texas with his dad on Friday, and then hopes to take trips to Louisville, Pitt and Hawaii "as soon as possible" before making a decision.

Congratulations to the U of L Law School's Tax Moot Court Team, which beat Kentucky's team and eliminated them from The 2014 National Tax Moot Court Competition sponsored by the tax section of the Florida Bar Association.

Just proving that I will legitimately publish any tidbit you send me which includes Louisville eliminating Kentucky from a national competition.

And finally, Temple has deemed Thursday night's game against the Cards as a "White Out," and will be handing out white t-shirts to the first 8,000 fans in the door.

Here's hoping it goes just as well as their Pink Out.