Louisville-Cincinnati Preview: One Last Conference Clash In The Derby City

Share All sharing options for: Louisville-Cincinnati Preview: One Last Conference Clash In The Derby City 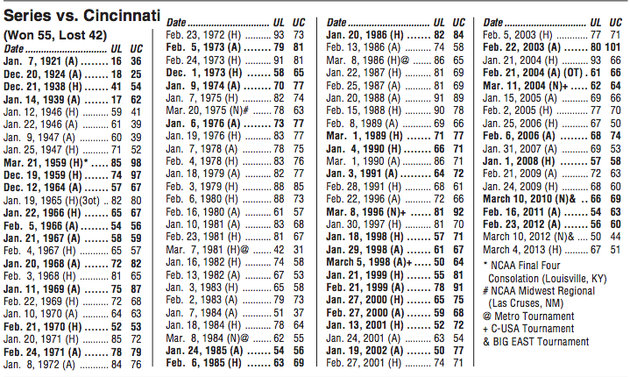 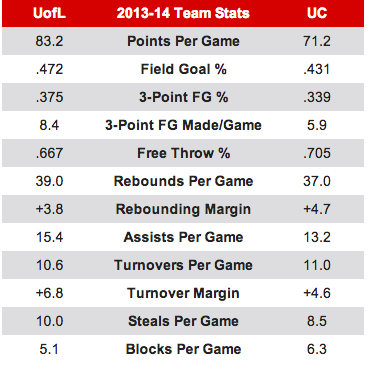 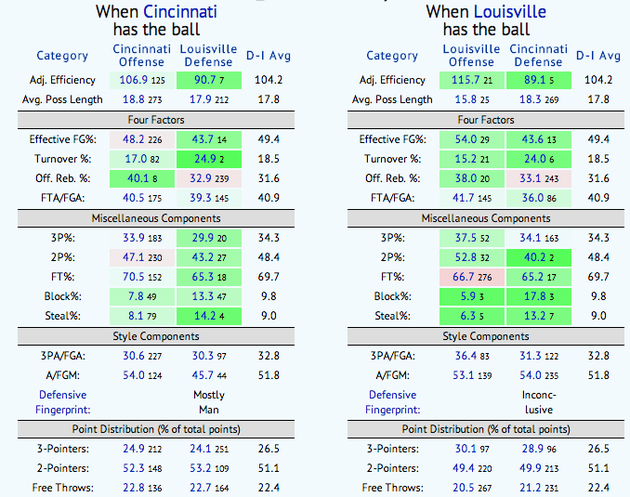 Unbeaten in the AAC and 19-2 overall, the 13th-ranked Bearcats head into Louisville riding an 12-game winning streak.

Senior guard Sean Kilpatrick is the fuel that makes Cincy go. He leads the American in scoring (19.1 ppg) and is second in three-point goals (2.6 per game). Kilpatrick and U of L's Luke Hancock were teammates on the 2013 USA Basketball World University Games team.

Cincinnati is off to its best start under former Rick Pitino assistant Mick Cronin, who is in his eighth season at UC. The Bearcats have held 28 of their last 29 opponents below 70 points, missing that mark for the first time in 28 games over the weekend at Temple. Cincinnati is among the national leaders in five key defensive statistics including scoring defense (56.9, fifth nationally), turnover margin (+4.6, 10th), scoring margin (+14.3, 15th), field goal percentage defense (.383, 15th) and blocked shots (6.3, 14th).

--Cincinnati is Louisville's most-played rival, and Thursday night's game will be the 98th meeting between the pair.

--Thursday's meeting is the sixth since 1990 with both teams ranked in the AP Top 25.

--Cincinnati is off to an 8-0 start in conference play for the first time since 2002.

--Louisville is third in the nation in turnover margin (+6.8) and is 36th in fewest turnovers per game (10.6). U of L has committed 10 or fewer turnovers in 13 of its last 23 games dating back to last year. The Cardinals are generating an average of 21.9 points per game off turnovers (season-high 35 at USF).

--Cincinnati is one of just 12 teams in the nation with two losses or fewer this season.

--Sean Kilpatrick leads the American in scoring (19.1 points per game), ranks second in three-pointers made (2.6) and fifth in free-throw shooting (84.9 percent). He has scored 20 or more points in 10 games this season, including a season-high 29 points at Temple on Sunday. He has been the Bearcats' top scorer in 18 of 21 games.

--Cincinnati Coach Mick Cronin was a member of U of L Coach Rick Pitino's staff with the Cardinals for two seasons (2001-03). UofL was a combined 44-20 in those two years

--Point guard Chris Jones has missed Louisville's last three games with an oblique injury, but is available for tonight's game.

--Louisville is 31-15 all-time against Cincinnati at home, and 1-0 against the Bearcats at the KFC Yum Center.