That's Louie doing his best Jack Torrance impression in Pittsburgh this week. I really hope that's not an actual person.

The Louisville women kept rolling through the AAC Tuesday night, taking care of host Rutgers, 80-71. Shoni Schimmel continued to do pretty much whatever she wants, netting a game-high 24 points. The Cards improved to 21-1 overall and 9-0 in league play heading into Sunday's home game against South Florida.

Tomorrow night's game against Cincinnati has been dubbed "Throwback Thursday" by the brass at U of L, and fans are encouraged to wear their best vintage gear to the game. I'm sure 2013 national championship apparel will suffice.

The game against the Bearcats is also an unofficial "Yurt Out," and the folks from Bug Time Yurts are offering free shirts for U of L students and discounted yurts for everyone else. 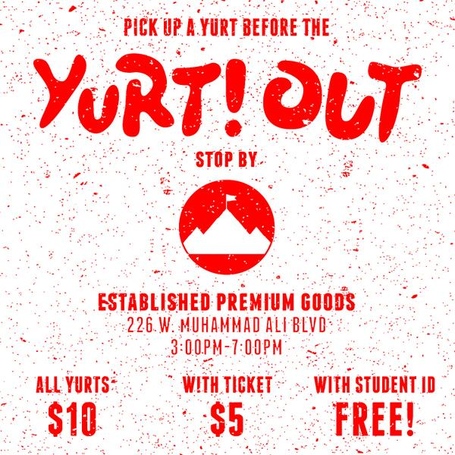 You can stop digging, guys. There's nowhere left to go.

Terrence Williams has been named the NBA D-League Co-Performer of the Week.

According to Evan Daniels of Scout.com, five-star wing Antonio Blakeney (2015) will be in attendance when Louisville hosts Cincinnati Thursday night at the Yum Center. Blakeney already has a scholarship offer from U of L.

Former U of L commit Daniel Gresham says he harbors no feelings of ill-will towards Louisville for pulling his scholarship.

Gresham, the one-time Texas pledge who had been committed to Louisville since June, had his offer revoked after Charlie Strong left for Austin. Bobby Petrino's new staff told Gresham it wouldn't have use for him in a one-back system.

The All Saints senior previously held offers from Alabama, Texas, Florida State and Auburn, among others. All of those schools had long since filled their needs for running backs. Gresham said unless a school finds a late spot for him, he will now choose from among UT-San Antonio, Colorado State and SMU come signing day.

"I had everything figured out and it was pulled out from under my feet," Gresham said. "But I've picked myself up and won't let this bring me down."

Gresham said he harbors no ill will toward the Louisville staff, saying "it's a business, and this was the move they made."

Not going to lie, quotes like that just make me wish he were still coming here even more.

After last night's events, Louisville is now the only team from the Commonwealth of Kentucky represented in the latest CBS Sports top 25 (and one).

Another work of art from Chris Link: 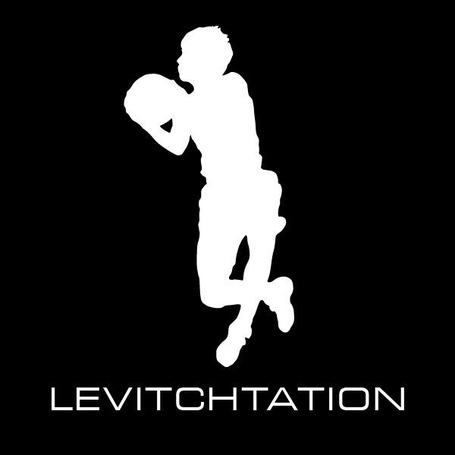 I would wear that shirt...or blanket.

The Louisville baseball team checked in at No. 13 in the preseason USA Today coaches' poll, which was released Wednesday. It's the fourth top 20 appearance in a preseason poll for the Cards so far.

The folks over at Down the Drive, SB Nation's Cincinnati site, aren't feeling overly confident about their chances tomorrow night.

My prediction: It's hard to win at Louisville - just look at last year's 16 point drubbing at the Yum Center. But I wouldn't be shocked if the 'Cats pulled off the upset on the road; would you? In the end, though, UL has too much fire power on offense, and I don't trust the Bearcats on the glass just yet. Really hope they prove me wrong: Cardinals win 68-61.

Justin Jackson is officially a "game-day decision" for Mick Cronin and the Bearcats.

I am totally in favor of U of L going the Navy route and letting Cardinal fans play Louie in paper-rock-scissors to earn free admission to home games. And I'm even more in favor of having fans go up against Air Louie for free admission, because I'm pretty sure he's incapable of throwing anything other than rock. Classic meathead.

The latest Bracketology from CBS still has Louisville as a six seed. My guess is that a win over Cincinnati will change that and a number of other mock brackets.

Young U of L fanatic Gavin Howard is doing some extremely impressive things in the community for a person of any age. Here's a little bit of his story:

Gavin's story started 3 years ago when he heard the St. Judes radiothon on WBKR. He started donating his birthday money each year with the 1st yr bringing in $43 to the radio station, 2nd yr bringing in $322, and this yr we set a goal for him at a $1000. He has sold short sleeve, long sleeve t shirts, sweatshirts, and hoodies. We didn't really know how things would go, but to say we have done very well with the shirts is an understatement. This story has got out and about to different newspapers and it's been a total WOW factor for us. My wife's cousin in Texas (ugh) got a shirt and has taken this thing and ran with it to help out. He has set up a website for Gavin accepting donations for the cause.

Here's a shot of the shirt: 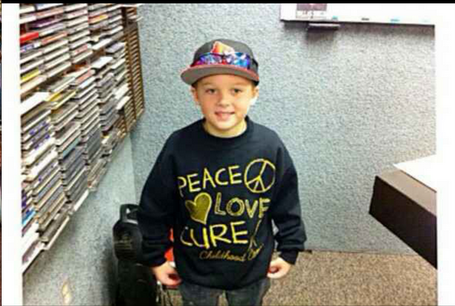 And here's the page where you can go donate.

The Harris Poll says that the popularity of college basketball is sliding, but there's a catch.

The AP's preview of tomorrow night's showdown is up.

While Cincinnati is currently looking down at Louisville in the AAC standings, Rick Bozich says they're looking up at the Cards when it comes to talent.

Thursday might be the last time Cardinal fans see their old rivals from the Queen City come to town for a long while.

U of L and Memphis are expected to play a home-and-home contract starting with the 2015-2016 season, according to the Memphis Commercial Appeal. The series starts in Louisville before the Cardinals travel to Memphis during in 2016-2017.

It doesn't appear Memphis will appear on the 2014-2015 schedule, U of L's first season in the Atlantic Coast Conference. Pitino said U of L will have an "awesome" slate nonetheless with matchups against his son's Minnesota team, Indiana and Kentucky.

"Our schedule is virtually impossible," Pitino said, speaking at a press conference previewing Thursday's 7 p.m. game against Cincinnati at the KFC Yum! Center. "If it gets any tougher, we're going to go into the Atlantic Division of the NBA."