Regardless of whether one team is bad, both teams are average or each is tremendous, I love this week. Everything just feels a little bit more special, or at least magnified, especially around the city.

UK's Bud Dupree notes that coaching staff isn't playing the "just another week" card. He says you can tell they're emphasizing this game.

George on freshmen: "When they first got here we kinda emphasized the basis of Kentucky football. Beating Louisville is one of those goals."

Jonathan George says younger players already understand importance of UofL-UK. He says he's not a big fan of "that team in red"

Miami Ohio down...now it's on to them dirty birds. Lets eat!!

It seems like the coaches and athletic office folks are monitoring Twitter pretty closely, as there were a small handful of tweets from players on both sides that were up for a short period of time before being sent off to the Twitter graveyard forever.

Regardless of the extenuating circumstances, this game means a considerable amount to both sides, and that's what makes this week so much fun. The risk/reward is never greater than it is when the Cards and Cats step on the gridiron or court at the same time.

Charlie Strong is currently gracing the front of Grantland.com for this feature on how he assembled "the nation's least-likely BCS contender."

"I was looking for something other than a great football program," Dyer said in a statement after enrolling at Louisville. "I wanted a support system that would continue help me develop socially, emotionally and spiritually."

It was a similar sentiment that brought former Florida corner and current NFL hopeful Adrian Bushell to the Cardinals. "[I was] an off-the-field problem guy, not making it to study sessions on time or to class on time, a little mouthy with the coaches at times,"Bushell said before facing his old team in last year's Sugar Bowl. "Coach Strong was there to give me the opportunity to come redo my image, repair my image."

The irony of Strong's strategy to make Louisville the nation's first second choice is that the more it works, the less necessary it becomes. With a BCS bowl victory last season, a Heisman contender this season, and a spot in the ACC next season, Louisville is starting to get a look from top recruits the first time around. Case in point: In January, five-star receiver and Louisville native James Quick chose the Cardinals over Ohio State, becoming the highest-ranked commit in school history. That Louisville was Quick's first choice shows just how far Charlie Strong has brought the program. That there was any chance Quick might go somewhere else, despite growing up a Cardinals fan with a father who played football at Louisville, shows how far it still has to go.

Even though Mark Stoops laid out the challenge to his fan base Monday afternoon, there are still a pretty large number of tickets available for Saturday's game.

Here's a handy graph which showcases the extent to which Louisville has gotten the better of Kentucky during the modern era of the rivalry: 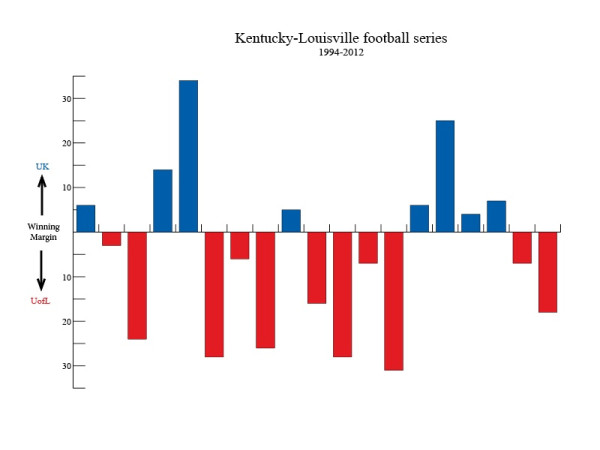 Louisville has jumped from No. 14 all the way up to No. 8 in the latest BCS rankings projections. One can only assume it was my 2001 rant from last week that did the trick.

Despite the fact that U of L is coming off a game in which it didn't run the ball particularly well, Mark Stoops says it's the Cardinals' balance that has him the most worried.

Stoops is a defensive guy. He's a former secondary coach, a former defensive coordinator and when he looks at Louisville he sees just the kind of offense that gives defensive coordinator fits. The Cardinals run the ball well enough that a defense has to bring more people into the box to stop the run, but U of L also is very "skilled outside," said Stoops.

And oh yeah, they have this quarterback named Teddy Bridgewater.

"He's just very good at what he does. He has a great feel in the pocket. He eludes the pressure when and where he needs to and the rest of the time he sis in there and distributes the football. He's very athletic and he's very live."

A look back at what was a somewhat underwhelming week for U of L sports:

A dog wandering onto a soccer pitch in Argentina and scoring a goal is your mandatory non-sequitur for the day.

The U of L baseball team kicked off fall ball with an afternoon practice on Monday.

If you're a Louisville gentleman looking to class up your Cardinal wardrobe, check out the items newly up for sale over at Beaux Tied LLC.

Following in the footsteps of her father, a Northern Arizona graduate, Haley Jurich is currently studying and working out at NAU in Flagstaff. That hasn't stopped her from running into and being able to interact with U of L fans like William Bridges, who currently resides in Sedona. The two struck up a conversation about the Cards and CC following a recent soccer game between the Lumberjacks and UNLV. 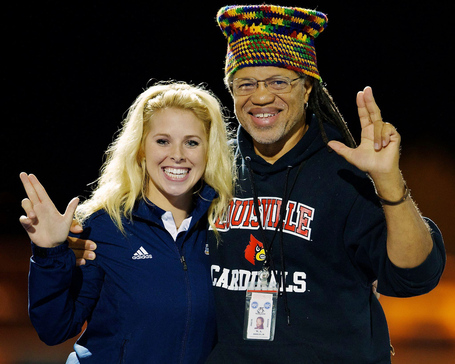 You're both a desert state inspiration to all of us. Keep fighting the good fight.

Mark Stoops and Neal Brown are both of the belief that success is contagious, and they're hoping they can parlay the success from last week's blowout of Miami (OH) into an upset win over Louisville.

UK freshman Ryan Timmons might be emerging as the X factor on offense and special teams that the Wildcats so desperately need.

I'm still holding out hope for The Wire, but Lefkoe's Seinfeldcast was pretty spectacular.

IT WAS WHEN I WAS BANGIN'.

Saturday's game will mark the sixth time that Louisville has carried a national ranking into the Battle for the Governor's Cup, a feat which Kentucky has never accomplished. U of L's No. 7 ranking will be the best it has ever had heading into the game. The only other time the Cards have faced the Cats as a top 10 team was when they were No. 9 back in 2007. They ended up not playing the game or something that year, I don't really remember.

Via Jacqueline Pitino, check out Rick Pitino sneaking in an L during Friday night's Hall of Fame ring ceremony. 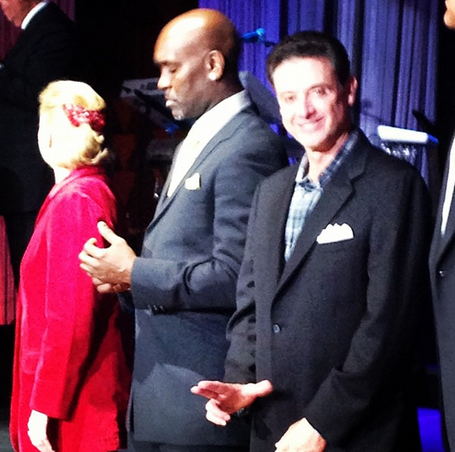 For a full photo gallery of Coach P's Hall of Fame weekend, check out the shots over at GoCards.com.

Former President, and current best friend of the U of L basketball team, Bill Clinton was among those offering up their congratulations to Coach Pitino over the weekend.

Congratulations to my friends and new Hall of Famers, @dawnstaley and Rick Pitino. Thanks for inspiring us for so many seasons.

An AP story from last Saturday's game written from an EKU perspective.

With this being the 20th year of the Battle for the Governor's Cup, Mark Story of the LHL breaks down the top 20 moments in modern rivalry's history.

3. Mumme's post-lightning rant. That zany 2000 game was Hal Mumme's second straight loss to U of L. Afterward, the Kentucky coach had a tirade. "It's not that important a game for us," he said of Louisville. "The important games are conference games. I know everyone likes to make it seem like a big deal, but we don't really benefit from playing a team that lives to beat us. It's the first game. We'll be over it by Monday."

1. Stevie gets loose. The most-hyped game in the Governor's Cup rivalry so far came in 2007. Louisville was ranked No. 9 and featured star senior quarterback Brian Brohm. UK had won the Music City Bowl the prior year and featured star senior QB Andre Woodson. Down most of the game, U of L rallied to lead 34-33 - until Kentucky's Woodson found wideout Steve Johnson open along the left sideline for a 57-yard, game-winning touchdown with 27 seconds left.

After the women's soccer team fell 2-0 at Kentucky last Friday, the Cardinal volleyball team will be looking to even the 2013-14 series Tuesday evening in Lexington.

A Hall of Fame induction was the cherry on top of Rick Pitino's dream year.

Credit the Kentucky coaches and players for not trying to put up the "just another game" front.

George and Dupree made no attempt Monday to paint the Cardinals as just another opponent.

"I won't say hate, but there is a dislike factor there," George said. "I'm not a fan of the red team. This week there is a big emphasis on coming out and beating those guys."

And is Stoops OK with his players making such a big deal of the rivalry?

"Our players need to understand that every week is important, and we will be very systematic in our approach," he said."But I'm never going to shy away from a big game and a rivalry, let's put it that way. We know it's important. We've also learned from week one too, trying to get them hyped up and amped up maybe wasn't the answer. We have to go about our business to prepare to win."

There are just seven BCS conference teams still without a victory this college football season (there are a lot more winless teams this college basketball season), and four of them - Memphis, Connecticut, South Florida and Temple - reside in the AAC. Somehow this is all Darius Washington's fault.

Speaking of Memphis, this debate over whether or not the Tigers have a better backcourt than Louisville has spilled over to just about every major sports network in the country. ESPN's Jeff Goodman, for his part, says the Cardinal guards are superior to Josh Pastner's guys.