It's safe to say that the biggest topic of discussion heading into Saturday's game was whether or not the fans would keep the momentum rolling from their terrific performance against Ohio.

Despite some noticeable empty seats on the side of the stadium where the press box is (I'm not good with directions), I think you have to chalk the performance up as a success. It was certainly a far superior atmosphere than anyone would have expected in this exact same scenario 15, five or even two years ago.

The coaches were certainly impressed.

S/O to the Best fan base in the country! #L1C4. 12 pm kickoff no problem. #PJCS was cookin' today. The best game day atmosphere in the NCAA.

Good on ya, Cardinal fans.

If that was too wordy for you, here's a synopsis: Teddy Bridgewater is an extremely good football player who excels at the position of quarterback.

Obviously, the biggest cause for concern to come out of Saturday was the fact that Louisville could only manage 2.8 yards per carry and 78 total rushing yards against Eastern Kentucky. You have to assume that the playcalling was extremely conservative heading into this week's rivalry game with Kentucky, but still...

Against Ohio, I thought Senorise Perry got the 2009 Bilal Powell treatment where he was met by two or three defenders in the backfield seemingly every time he had his number called. On Saturday, however, I thought Perry looked noticeably tentative. His momentum seemed to stop every time he got the ball safely secured, and he was more interested in stutter-stepping East and West behind the line than he was hitting the hole. Perhaps this is a product of him still getting used to life after ACL surgery, I don't know.

Regardless of the fact that Shawn Watson will likely dial up a sexier run game than he did on Saturday, that the Cardinals couldn't assert their will on the ground any more than they did against an overmatched EKU defense was disappointing. 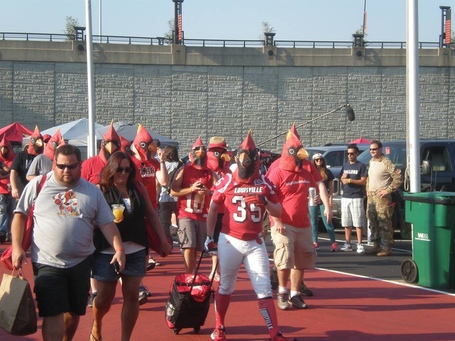 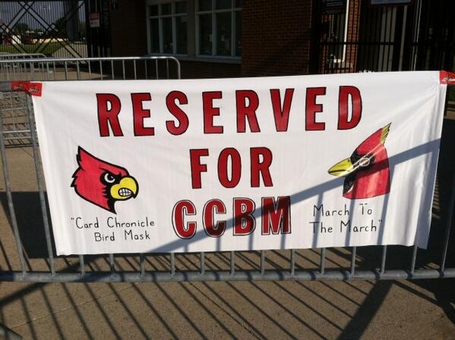 The offseason hype surrounding Gerald Christian certainly appeared warranted on Saturday. That guy is a lethal weapon for Bridgewater and Watson to have at their disposal, and my assumption is that we're only going to see his role grow larger as the season goes along.

If it weren't cursed, I would totally have to bust out the black 18 jersey at some point over the next three months.

Aside from John Wallace outscoring Eastern Kentucky 14-7, special teams were the other enormous area of concern.

We talked about this ad nauseum last season, but I don't understand why our kick coverage guys appear to run down the field at about 3/4 speed. The first potential tackler is never even in the vicinity of the returner until he's around the 20 or 25 yard line, which is something that just can't happen. EKU averaged 30 yards on six returns, and two of those returns made it out past the 35 yard line.

I don't know what Kenny Carter and company did before the Sugar Bowl last year, but they need to do that again, because that was the only time last year where our guys were flying down the field and meeting returners inside of the 20 yard line. Change the personnel, change the mindset, offer some (legal) incentives; do whatever you have to do to clean that ish up.

On the flip side, the Cards were again less than exciting in the return game. Robert Clark returned the only kick he got his hands on for 23 yards, and Eli Rogers and Kai DeLa Cruz averaged just 3.5 yards on four punt returns.

Though he's largely been forgotten now because of his dismissal from the program, return specialist JaJuan Spillman was an enormous asset for that '06 Cardinal team during the regular season. There were also times during '08 and '09 where Trent Guy single-handedly kept U of L in games because of his special teams prowess. Having a guy who can "steal" six points on a return or at least consistently set the offense up near midfield is such a valuable weapon in football, and I wish we could find that again.

I really liked seeing Charlie call a timeout and pretty much lose his shit when Teddy tried to wave the punt team off the field...even though I also kind of liked seeing Teddy try to wave the punt team off the field. But no one, not even a Heisman Trophy candidate, is bigger than the man with the clipboard, and Charlie going somewhat ballistic in that moment was the right message to send to both his quarterback and the rest of his team. 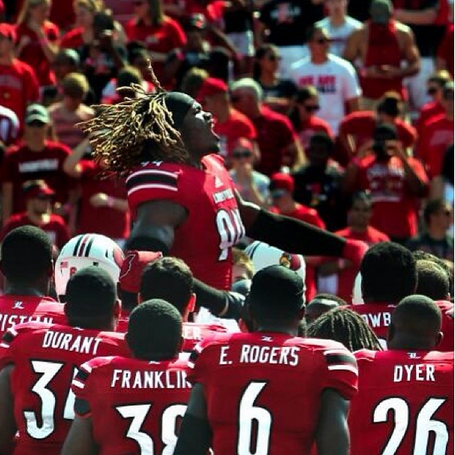 I'd love to see video of it being shown on the big screen before every game.

If that's not my favorite new thing of the season, then Teddy hanging out in the crowd with the fans after the games definitely is. 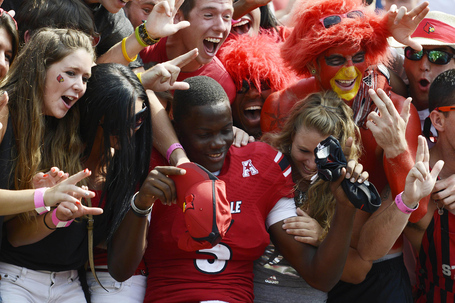 It's hard to single out one guy or any handful of guys on the defensive side, because it was such a terrific team effort that really should have culminated with a shutout. Preston Brown warrants special mention for his eight tackles, two sacks, three tackles for loss and three quarterback hurries, as does AAC Defensive Player of the Week Calvin Pryor for his eight tackles, one forced fumble and one interception.

James Burgess was also very impressive for a second straight week, finishing just behind Pryor and Brown with seven tackles. He also got to showcase his speed and option skills on a second quarter fumble recovery.

I said this on Prudat's photo gallery post, but I love the veteran look of "umm, should we be doing this?" on Hakeem Smith's face as the pitch is taking place in front of him.

It's safe to say Michael Dyer has fully embraced his new life as a Cardinal. 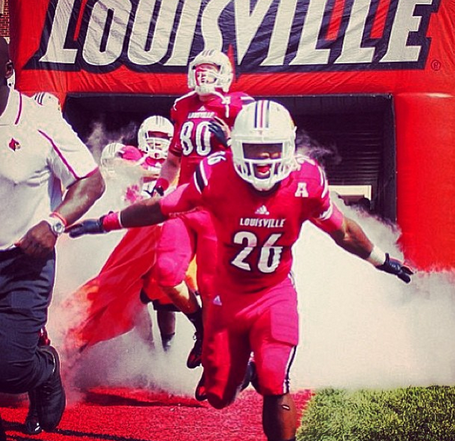 Call it a hunch, but I think the young man's about to have himself a big weekend.

Also, I enjoy the "Cardinal bird flying" thing that Pryor, Dyer and a bunch of other guys have started doing when they run onto the field or make a big play. I'm going to start doing it after I get my ticket scanned and go into the stadium.

I'm the biggest Jake Smith fan you're ever going to meet, and he's done a terrific job so far in his move over to center, but there are times where he needs to put a little bit more mustard on his shotgun snaps. There were a number of instances against EKU where the snap floated a little bit and the result was Teddy having to catch the ball low and off-balance because he'd already started to rock backwards.

For the past three years, I've been saying that Louisville needs to adopt the old Randy Moss Vikings philosophy of running at least one "just throw it up to DeVante" play a game. Parker's first touchdown catch on Saturday was a prime example of why. 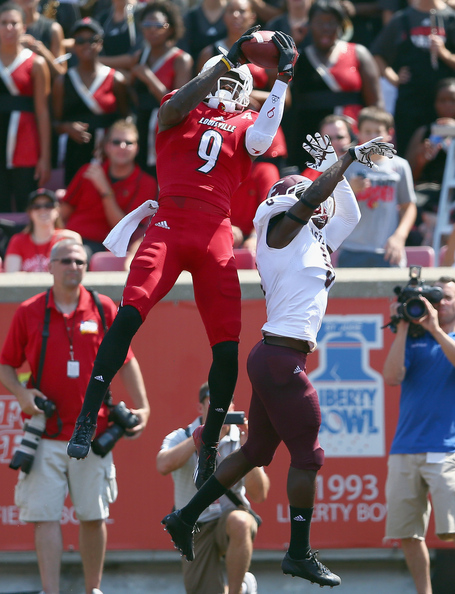 The young man has athleticism to spare.

I get really excited whenever B.J. Butler gets his hands on the ball. Really excited. I'd also love to see him be the guy who comes out with a green mohawk to be the "relish" to Damian Copeland's "honey mustard" and Kai DeLa Cruz's "ketchup." I think he could pull it off.

Expectations have changed every bit as much as the final scores have, and that's a great thing.