Shoutout to Patrick and Shannon for conquering all 6,593 ft. of Mount Le Conte in the Smoky Mountains National Park. I probably walked a total of two miles this week, which I'm pretty sure is about the same thing.

Brain surgery went well! Not feeling the best at all but being knocked out for 13 hours helps a lot, thank you everyone!

Here's hoping the next time we're cheering for Hunter it's on the field.

Good on the Louisville field hockey team for protecting Card Chronicle's honor and dominating William & Mary, 4-1 this afternoon. Freshman Shannon Sloss scored two goals while fellow freshman Jennifer Pels had a goal and an assist to lead the Cards.

Eat it, Bill and eat it, Mary.

The Rick Pitino Hall of Fame tributes continue to pour in.

First up, there's this from WHAS:

And lastly, Eric Crawford over at WDRB chimes in.

Here are your order of events for tomorrow, with the CCBM March being a notable exception: 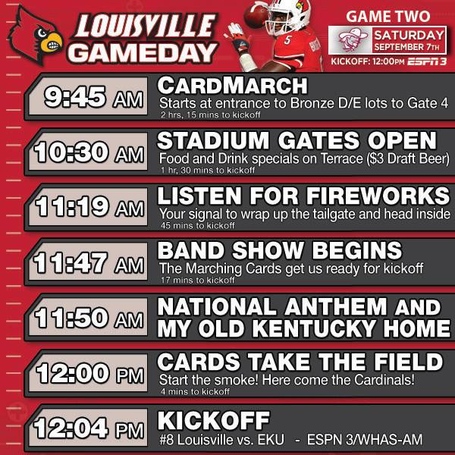 The word from the folks at Thornton's is that nearly all their stores are in possession of the 2013 Louisville football posters, and those that aren't will be by tomorrow. Your patience is appreciated.

Preston Brown says the best way the Cardinal defense can help the Cardinal offense is by getting them back on the field as quickly as possible.

Linebacker Preston Brown said he's not sure what the defense's goal is for three-and-outs, but he knows that if the Cards' defense wants to hurt their opposing defenders, sending them right back out onto the field against Teddy Bridgewater and Co. is the way to do it.

"If we can do that, and let our offense go to work on people, that's a big weapon," Brown said. "The faster we get them out on the field, the faster the offense can start wearing them down, and the more aggressive we can be when we come back out."

U of L commits Nilijah Ballew, Reggie Bonnafon, Micky Crum and Cameron Polk are expected to be in attendance for tomorrow's game.

Speaking of Bonnafon, check out this great pic he snapped from the sidelines during the Ohio game: 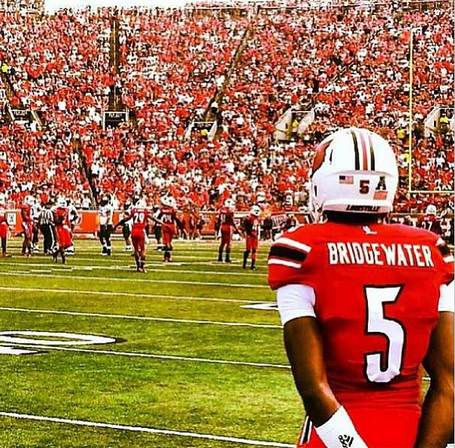 I'm one of those dots in the background. I'm wearing a hat.

Very, very good news from Hialeah (Fla.) Champagnat Catholic safety Michael Johnson, who says he's still "very strong" in his commitment to U of L and won't visit any other schools despite still being recruited by some of the top programs in the country. Kid is a big time talent.

Your inspiring story of the day comes from the only little boy in the state of Kentucky battling progeria, a rare disease which causes rapid aging.

If you'd like to know more about Jaylen Johnson and why the U of L staff is so excited about having him here, I'd highly suggest you read Steve Jones' interview with his mother, Janetta.

What was Coach Pitino's reaction to the news?
Coach Pitino was happy. He was excited. The thing about Coach Pitino, he has treated Jaylen like he was the No. 1 player in the country from Day 1. The coaching staff, Kevin Keatts and the rest of the assistants, they have treated Jaylen like he was No. 1. I would say to myself, ‘This is the national championship team recruiting my son like this?' I was so wowed. I thought they would let off, like, ‘You should be calling us because we're the national championship team.' But, oh no, they were at the top of (of the list of schools) recruiting us (as far as how hard they tried).

Montrezl Harrell has a pretty good chance to go to the NBA after this year. Chane Behanan possibly could have a pretty good chance to go to the NBA. Did you guys talk about that, and did Jaylen see some opportunities there to play right away?
Well, Jaylen believes in hard work. I've taught him that. He can get in there and work hard, and he can earn his playing time because that's the type of player he is. Hard work earns playing time in itself. I met Montrezl. I love the kid. In fact, I love all those kids. When we caught a chance to meet some of them, they were just top-notch kids. Everybody has to work hard. If Jaylen comes in as a freshman working hard, I'm sure there is going to be playing time for him.

Safe to say Janetta and Jaylen are going to have no trouble fitting in with the culture here.

A reminder that the first Louisville/Kentucky showdown of the 2013-14 sports season will take place tonight in Lexington when the women's soccer team takes on the Cats at 7:30. The Cards are hoping to snap a two-game losing streak to their arch-rivals.

This is the president of Texas A&M: 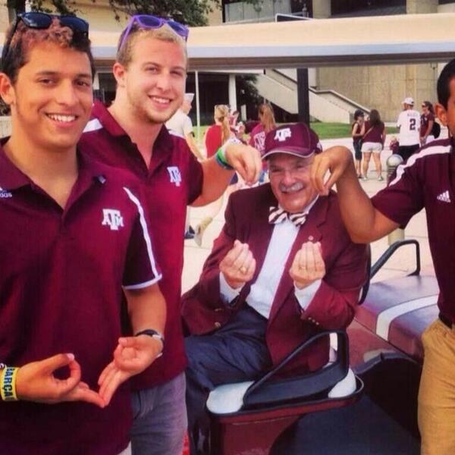 A&M, I got a feeling your whole program's goin' down.

Lexington catholic quarterback Reese Ryan, a four-star prospect from the class of 2015, will be attending the Louisville/EKU game tomorrow.

A preview of Saturday night's men's soccer match between No. 6 Louisville and Butler. A reminder that admission to the 7 p.m. game is free with your ticket stub from the U of L/EKU football game earlier in the day.

We're about 14 hours away from more of this: 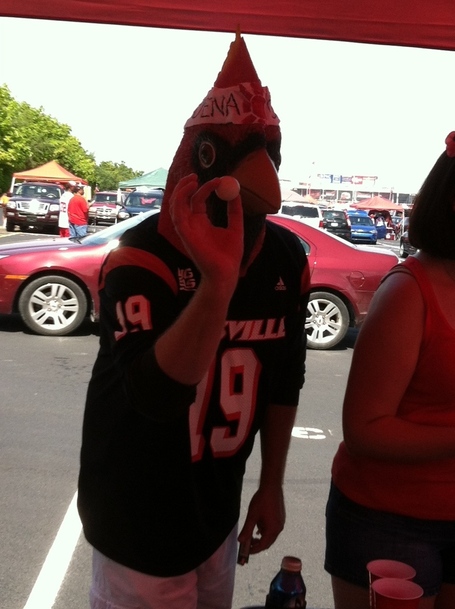 The ever-bourgeoning emergence of James Burgess has become one of the biggest stories for the Louisville defense after one week.

Chris Jones is one of a handful of JuCo transfers primed to have a huge impact on college basketball this season.

Teddy Bridgewater is the No. 1 overall pick in the latest 2014 mock NFL Draft from SB Nation.

Can Bridgewater a franchise around as easily as he flicks passes 30 yards down the field? We're going to find out unless he happens to falter in the miserable American Athletic Conference. When there is a highly rated quarterback, they go first overall. If the Raiders finish with the first pick, that means the Terrelle Pryor experiment failed.

A look at the spreads on all tomorrow's top 25 games.