Landen Mello showed up to his first day of Kindergarten at St. James Elementary looking like this. He was instantly passed ahead three grades.

It's been Rick Pitino day over at the ESPN college hoops hub, and one of the things they're doing is ranking the top 10 college players the Godfather has ever coached. Eamonn Brennan lists just two Cardinals (Russ Smith at 8 and Francisco Garcia at 10) in his rankings, while colleague Myron Medcalf has Reece Gaines at 4, Peyton Siva at 7 and Cisco at 9. I think the latter list is much closer to being accurate.

More from ESPN on Pitino:

His relationships with his players

A quick reminder that the sixth-ranked men's soccer team will play its first home game of the season tonight at 7p.m. when they host Cleveland State inside Cardinal Park. The "Louisville Louligans" will be organizing a march to the game that begins at 6:15. The march will start at the Southwest corner of First and Burnett and end at the stadium...obviously.

According to TeamRankings.com's formula, Louisville is the most underrated team in the coaches' poll and the second-most underrated in the AP Top 25.

Ohio highlights courtesy of U of L:

According to ESPN's Jeff Goodman, Rakeem Buckle's has re-enrolled at Florida International and will have a scholarship this season. That's better than him having to pay his own way, but it's still absurd that he's being forced to play his final season of college basketball for a team that's prohibited from participating in any postseason tournament.

Even when Doug is complimentary of Louisville, he's still straight-up wrong.

.@EyeOnCBB people forget that Kevin Ware was their most impressive guard in March--LVille very talented back there

Good? Absolutely. Most impressive? Not even close.

Rivals has updated its basketball top 150 for the class of 2014, and U of L commits JaQuan Lyle and Shaqquan Aaron check in at No. 22 and No. 27, respectively.

Other players of note in the rankings:

A short week and the trend of FCS schools stunning FBS opponents are the two main factors worrying Charlie Strong heading into this weekend's game against Eastern Kentucky.

If Robert's talking about Michael Dyer and Will Gardner, then yeah, I'm liking our new dogs.

Facebook's an interesting place. Did I say interesting? I meant often depressing and soul-crushing.

If you have any interest in the NFL, SB Nation's very cool looking 2013 preview is worthy of your attention.

A quick reminder that Teddy Bridgewater needs your vote for "person who deserves their face on the side of a building."

Magic's on the train.

And to consolidate it: 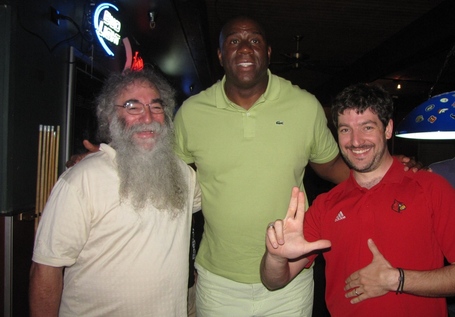 Former UK basketball standout DeAndre Liggins has been arrested after, among other things, he dropped an Xbox on his girlfriend's head during a domestic dispute.

Bilal Powell has been listed as the starting running back for the New York Jets to begin the season. Maybe if their quarterback situation keeps devolving he'll get to carry the ball 8,000 times.

Though Teddy Bridgewater and the offense garnered the bulk of the headlines, it was the Louisville defense that may have given the most encouraging performance in week one for the Cards.

The junior standout has every tool that evaluators look for in franchise quarterbacks with a combination of arm talent, athleticism and leadership skills that perfectly fits into any offensive system. Bridgewater displayed those traits during a spectacular sophomore campaign that resulted in a 3,700-yard season with an impressive 27:8 touchdown-to-interception ratio. Additionally, he put on a sensational showing against Florida in the Sugar Bowl that showcased his potential as franchise quarterback at the next level.

With the football world buzzing about his upside throughout the offseason, I tuned in closely to watch Bridgewater perform in the season opener to see if his game continued to match the hype. After watching Bridgewater put up a 300-yard game with five touchdowns and a pick, I'm convinced the Cardinals' star has the tools to get it done in a major way. From his flawless execution in the pocket to his laser-like throws to all areas of the field, Bridgewater put on a passing clinic against Ohio. Although the competition certainly didn't fully test his skills as a playmaker, it definitely provided scouts with a glimpse of the talent that made him the focal point of a quarterback class that could rival the 1983 draft class in terms of depth and talent.

There's no question that he's one hell of a coach, but there's also not much issue over whether or not Bobby Petrino is an a--hole either.

I meant to note this in today's leftovers post, but I suppose I'll go ahead and discuss it here.

One of the more interesting occurrences in Sunday's game was Teddy Bridgewater getting right in the face of Nacho Garcia after Nacho picked up a false start penalty with the game already out of reach in the third quarter. There's no way for anyone who wasn't on the field to know what Teddy said or what type of tone he used, but that's something we've never seen him do, even late last year when he had fully emerged as a team leader.

You also have to love his reaction to Will Gardner's touchdown strike. The kid just gets it, in all areas.

R.I.P. to former Butler mascot Blue II, who will be forerver immortalized by this picture:

The Kentucky/Miami (OH) game is ESPN's "pillow fight of the week," with the loser guaranteed to garner the top spot in the site's weekly "Bottom 10."

A Daily Dose of Hoops likes Louisville to hold off Connecticut and Memphis in its first and only basketball season in the American Athletic Conference.

The Orlando Sentinel says Teddy Bridgewater made as strong a case as anyone during week one of the Heisman Trophy race.

The Buzz: There's efficient and then there's Teddy Bridgewater efficient. The Cardinals quarterback opened the 2013 season by completing 82 percent of his passes (23-of-28) for 355 yards while throwing five touchdowns in a 49-7 romp over Ohio. It was the fourth time in his career that he's completed more than 80 percent of his passes in a game.  It will be up to Eastern Kentucky to try and slow down Bridgewater, who has thrown at least one touchdown in 13 straight games.

The Daily Cougar takes an extremely quick look around the AAC after one week of play.

It really is the best gift ever. 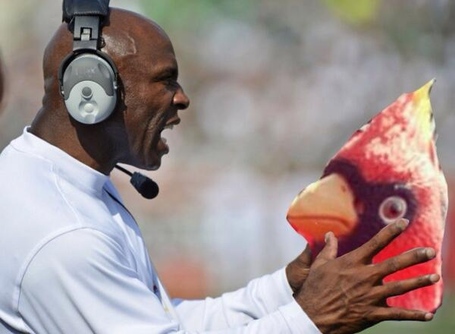 Want to know just how hard it's going to be for an undefeated Louisville team to make the BCS title game? Check out the Cards' computer rankings after one week. Eight of them have U of L ranked 30th or worse, and three have the Cards in the 40s.

The Louisville offense's "Nascar" attack has Teddy Bridgewater's steady hands on the wheel.

And finally, don't tell the folks over at EKU not to believe.

We need your support this week Colonel Nation! Have faith. Have pride. #BeatLouisville