Casey Page bringing some much-needed beauty and culture to the Florence Cathedral.

1. What's the most pressing issue for Louisville at the start of practice?

Andy Katz: Rick Pitino has made it clear from the beginning of the summer that the most pressing concern is who will replace the back line defense of Gorgui Dieng. Montrezl Harrell had a sensational summer. He's a budding star, but not a traditional, intimidating shot-blocker. Will Stephen Van Treese be that player? Or a combination of both? That's the question facing the Cardinals.

Myron Medcalf: The biggest question for Louisville is tied to leadership. The Cardinals are arguably as talented, perhaps more talented, than they were last year. But they're going forward without Peyton Siva, who was a critical leader for the program throughout his career. Who will be that guy in 2013-14?

C.L. Brown: Hard to tell what will be more daunting for junior college transfer Chris Jones: replacing three-year starter Peyton Siva in the lineup or playing point guard for coach Rick Pitino. Neither will be easy, but Jones' play will be crucial as the Cardinals have experience at every other position.

The five FBS teams that have yet to trail a game for a single second this season? Ohio State, Miami, Washington, Texas Tech and Louisville.

The Louisville women's soccer team blasted Rutgers 4-1 over the weekend to improve to 2-0 in AAC play and 6-3-1 overall. Freshman goalie Paige Brown was named the conference's Goalkeeper of the Week earlier today.

In case you've ever wondered how the CCBM spends bye weeks... 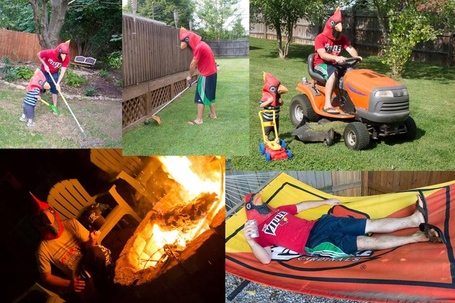 Rick Pitino's first book signing will be Thursday, Oct. 3 from 7 to 8:30 p.m. at Molly Malone's in St. Matthews. The One Day Contract hits shelves tomorrow.

USA Today re-ranks the entire top 125 in college football and has Louisville checking in at...No. 15. Central Florida (27) and Rutgers (39) are the only Cardinal opponents to crack the top 40.

ESPN looks at how important winning the battle at the rim (insider) is in college basketball, and how it fueled Louisville's national championship run.

Via Lefkoe, here's the way the coaching staff displays the 2013 schedule inside the Schnellenberger Complex. 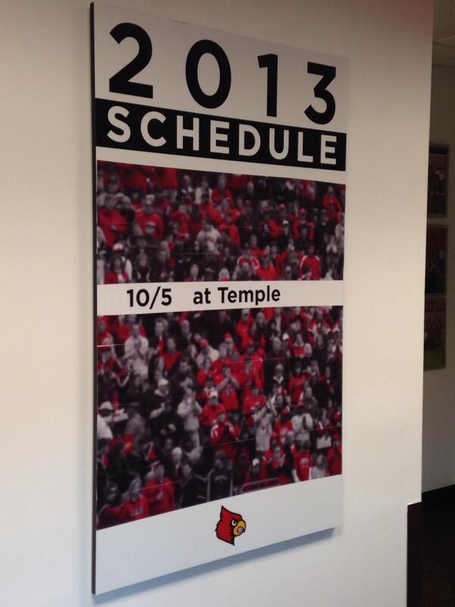 After an inconsistent start, the Louisville men's soccer team is back in the top five of Top Drawer Soccer's latest top 25 rankings. The Cards also had three players honored by the AAC on Monday.

If Maryland had somehow managed to find a way to leave for the Big 10 a year early, the schedule Louisville would be finishing its season with would be brutal, but awesome.

U of L is a top five football team in the latest UPS Team Performance Index Rankings:

Mark Coomes discusses Teddy's appearance on The Dan Patrick Show and apologizes for predicting that Kentucky would upset Florida.

After consecutive bad games from Michael Vick, (NFL) fans in Philadelphia are the latest to look to Teddy Bridgewater as a potential franchise savior. They'll have a chance to get a closer look at him on Saturday.

The preview isn't online yet, but Louisville is No. 2 in Slam Magazine's preseason college hoops top 25: 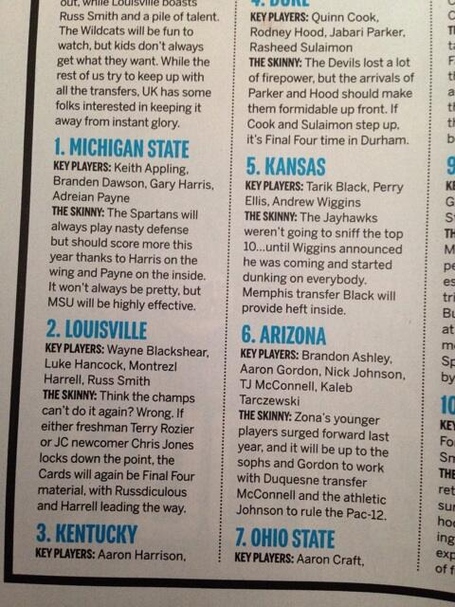 The Louisville field hockey team will be wearing pink on Sunday for their 1 p.m. game against Indiana in order to help support breast cancer awareness. You can visit their fundraising page here.

At least one national writer believes Louisville has a better chance of playing for the national title than Alabama does.

1. Ohio State (5-0)- The Buckeyes have a fortunate combination of being a very good football team, coming from a power conference, and having a light schedule (Northwestern and Michigan, the only real challenges, are not exactly fear inspiring).

2. Oregon (4-0)- Right now, the Ducks are the most dominant team in the country and my #1 overall. However, a tough schedule that includes Washington, UCLA, and Stanford gives them perhaps the most difficult road of the serious contenders.

3. Louisville (4-0)- By far, the Cardinals are the most likely team in the country to go undefeated. However, could their ultra-easy schedule keep them out of Pasadena?

4. Alabama (4-0)- The 2013 edition of the Crimson Tide are not quite what they were last year. While I think they go undefeated and make it to Pasadena, an SEC schedule is tough, particularly when LSU and, likely, Georgia are still remaining.

Paul Pasqualoni is out at Connecticut. His timeline as the Husky's head man is absurdly bad...aside from somehow beating Louisville at PJCS last November. 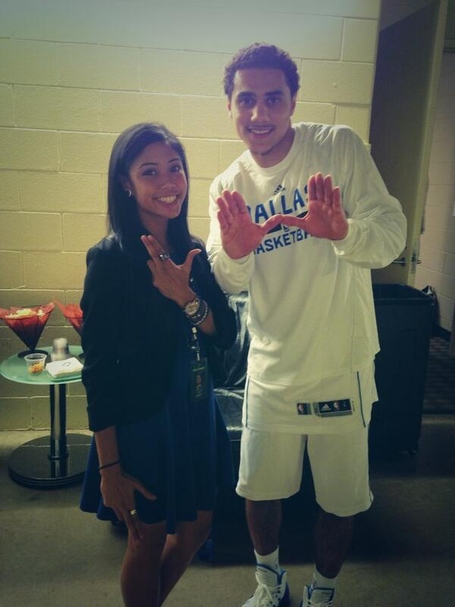 CBS says the midseason firings in college football could result in a scenario in which Shawn Watson winds up at UConn.

Tony Barnhart, Dominoes 6 and 7 -- UConn hires Louisville offensive coordinator Shawn Watson, Ball State hires Cincinnati offensive coordinator Eddie Gran. All you have to know about Watson you can discover in watching Teddy Bridgewater play. He knows how to coach the position. He has been a head coach at Southern Illinois (1994-96), an offensive coordinator Colorado, Nebraska, and Louisville. The 54-year-old Watson is ready to be a head coach again. Gran, 48, is one of the best recruiters in the country, especially when it comes to running backs. Among those he has signed over the years were the dynamic duo at Auburn -- Ronnie Brown and Cadillac Williams. He was a finalist for the Florida Atlantic job that went to Carl Pelini. Gran should have been a head coach long ago.

Chinanu Onuaku will officially be announcing his college decision on Friday. Weekend visitor Sam Cassell Jr. is also expected to announce in the near future.

And finally, I'm back on the radio with Mark Ennis playing all your favorite R&B hits from the late '90s tonight from 6-8 on ESPN 680.