Mike Hieb is celebrating Louisville's fantastic start to the 2013 season all the way in Afghanistan.

The Voice-Tribune is doing one of those interactive giga pan (zoom in and see yourself) shots before every home game this season. It's really cool.

We have been double dog dared.

If the stadium is packed at 11:50, Coach Bedford has agreed to give motivational speeches at all of our birthday parties. Probably. It's like 97% right now, I'll keep you updated. But definitely be in your seats on time.

Major congrats to our man Eric Wood, who in the past week has both signed a monster contract extension and been named one of the Buffalo Bills' captains for the 2013 season.

Here's hoping he never has to buy a drink in Buffalo again.

Going into the 2013 NCAA season, the general consensus among draft analysts was that South Carolina defensive end Jadeveon Clowney was by far the best player who could possible make himself available for the 2014 NFL draft. The only way that Louisville quarterback Teddy Bridgewater would be the first overall pick if both Bridgewater and Clowney were available, conventional wisdom said, was if the first team drafting desperately needed a quarterback. While I have no doubt as to Clowney's NFL potential - he is the most dominant collegiate defender I have seen since Ndamukong Suh - there is an argument to take Bridgewater first.

After studying Bridgewater's 2012 tape intently, and reviewing his five-touchdown performance against Ohio on Sunday, I'm not sure the divide between Bridgewater and Clowney is as large as some believe. That's more about how valuable I believe Bridgewater will be to his NFL team than it is any knock on Clowney. Based on what I've seen, i think that Bridgewater has the opportunity to provide some unique benefits as a pro.

Really cool Teddy B wallpaper from The Birds' Nest: 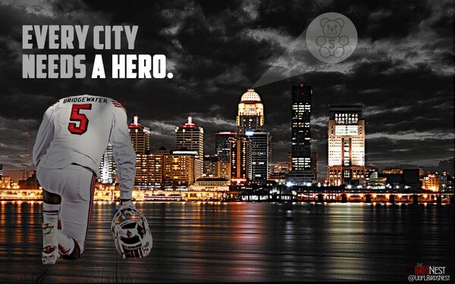 Following the U of L men's soccer team's season-opening win over Virginia, the Cards have climbed to No. 6 in Top Drawer Soccer's national rankings. Ken Lolla just keeps reloading.

Fellow AAC member Connecticut is your current No. 1.

Speaking of the soccer team's win over No. 20 Virginia, here are the highlights:

The Cards will play their first home game of the season on Wednesday when they host Cleveland State at 7 p.m.

You can help Teddy win the Davey O'Brien Award by voting for him here. You should vote for him there.

If you were wondering why tight end Hunter Bowles hasn't been suited up since the start of fall camp, Hunter has your answer:

I want to take this time to inform everybody and anyone who have been wondering about my current medical issues. I have what's called a Chiari malformation, which basically means part of my lower skull didn't form right as a child. Over time it's pushed on my spine causing a cyst to actually form inside my spine. I will be having surgery this Thursday to remove those parts in my lower skull/upper neck. People have also asked if I'll be able to play football again. As long as the cyst disappears over time I will be able to. I don't usually ask for prayers, but it would mean the world to me and my family if everyone could pray for a successful surgery. I'll do my best to keep everyone updated on how surgery goes. Thank you to everyone.

Our thoughts are with Hunter, who we hope to see on the field again very soon.

Jeff Walz spent his Labor Day landing one of the top recruits in the country, as consensus top-25 prospect Myisha Hines-Allen of New Jersey announced her commitment to U of L on Twitter. Hines-Allen is the No. 13 overall player in the class of 2014 according to ESPN.com.

The Big Lead was not a big believer in Louisville heading into the opening weekend, which is awesome to read in hindsight.

Ohio (+20.5) at Louisville: Bet against Louisville while the public still overvalues them. Louisville won two games by more than 10 points last season. Their defense is not that good. Ohio can run the ball and score points. The Bobcats should stay in range.

Ian Klarer has some entertainment for your Tuesday evening: 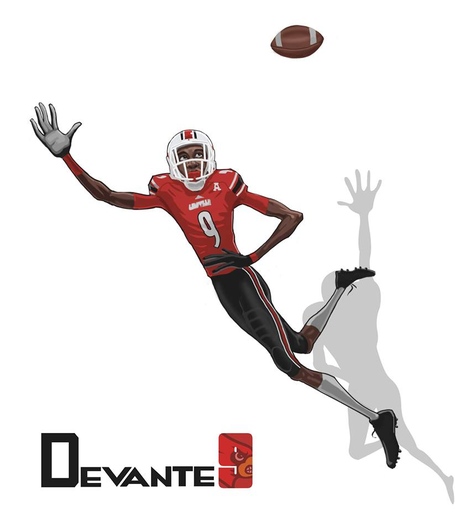 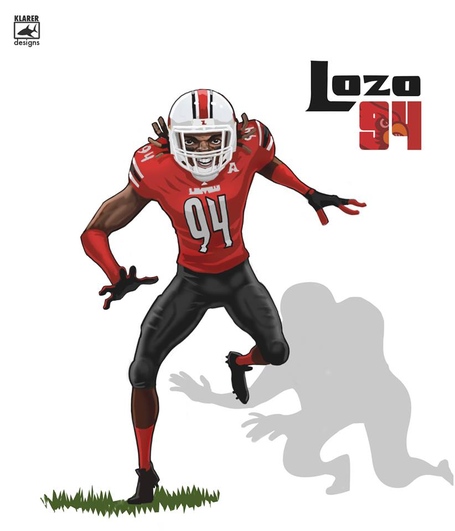 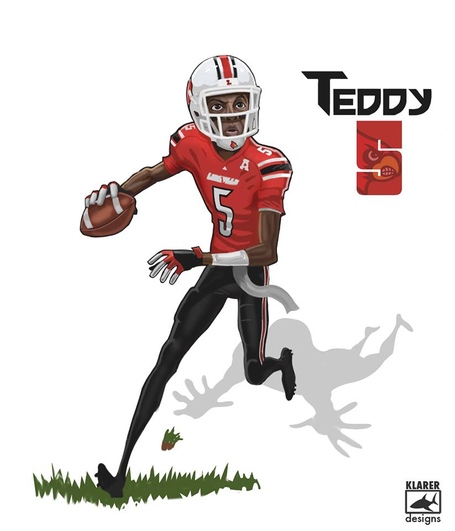 Phil Steele says Louisville gave the third-best overall performance in college football's opening week. Only LSU, which beat TCU by 10, and Washington, which throttled Boise State, were more impressive to start the year.

No, what I am doing here is rejoicing in the ease of this schedule, and in fact wishing it were even easier. There's a completely unserious but nonetheless real part of me that wants the Louisville Cardinals to decline any bowl invite they receive and content themselves with whomping on fools 56-9, forever and ever.

In college football, as in just about every American enterprise, there's this impetus to move up, move forward, fall into a bigger pond: "We need to take the next step." I am speaking only for myself, but I'll tell y'all ... I am like most sports fans, in that I am used to losing and losing and losing. Suddenly I've arrived at a moment of my fandom in which I can drink a couple of beers and watch my quarterback rip apart a clueless defense, any defense, for 475 sky-yards en route to a 70-12 win, and you're telling me that this, somehow, isn't sufficient? I want for nothing. I don't need validation from the rest of the country. I don't need a damn thing else. Not now. We're watching a thunderstorm, and I don't know why you brought a telescope.

Like Jack Bauer's silly adventures, this arrangement is too unstable to last very long. As long as it does, I'll allow myself the simple joy of watching my team issue all this gorgeous destruction to a slate full of suckers. WHOMP.

Congrats to U of L commit Reggie Bonnafon, who has been invited to participate in the Offense-Defense All-American Bowl in January.

Pat Forde's "Forde Yard Dash" touches briefly on the state of things in the American.

American Athletic Conference (7). What happened: horrific losses for South Florida and Connecticut, and not much to be impressed by beyond the reliable suspects (Louisville and Cincinnati).

Acceptable panic level, on a scale of 1 to Crybaby: 7. Nobody was predicting greatness from the American, but it under-performed against even modest expectations. Already believed to be a bad hire after two losing seasons, Connecticut's Paul Pasqualoni removed all doubt with a 15-point loss to Towson. But the real shocker was the complete face-plant by South Florida in the first game of the much-ballyhooed Willie Taggart Era. The Bulls totally imploded against McNeese State. Those losses figure to adversely affect computer rankings for the entire league. 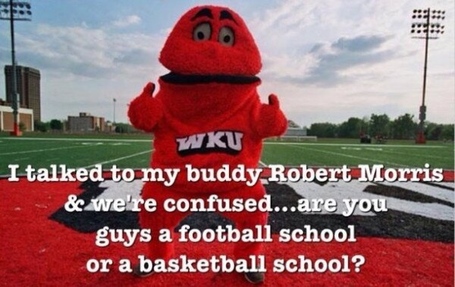 Mark Coomes of Insider Louisville says Teddy Bridgewater is the most thoroughly likable athlete in U of L history.

Despite finding the endzone in his last game, Josh Bellamy was cut by the Chiefs on Monday.

Of course the CCBM was at the Zombie Walk last week. 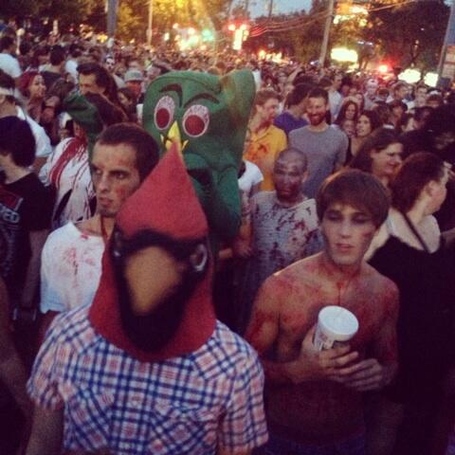 The Lefkoe is currently blowing up nationally because of this Sunday night sportscast in which he dropped the names of 31 old wrestlers because people on Twitter told him to.

He beautifully explains the motivation behind Wrestlecast on his less-than-beautifully-named Tumblr page.

ESPN is pretty upset about the Notre Dame/Michigan series ending, which is why all their analysts are making up fake stories about it.

These are sad times in Lexington.

ESPN's coverage of Clemson's entrance on Saturday night might wind up being the best thing it does all year. Very cool. 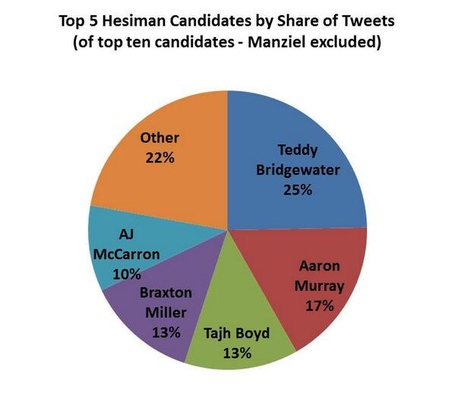 Top-rated U of L commit Poona Ford had a monster start to his senior season last Friday, recording 17 total tackles, four tackles for loss, one sack and four QB hurries. He only played three quarters.

If Michael were still on the team, I'd have a sensational "Burning Bush" joke to drop here. Instead I'll just post the tweet.

Meanwhile, scouts are talking to me about Teddy Bridgewater like he's Moses.

I have no idea how Hot Hot got snubbed here.

If you're ever in need of a smile, do yourself a favor and check out the CCBM reviews over at Amazon.

Solid contender for CCWOTY right there. Figure it out. You've got 10 se--ok you already got it.

Your first Louisville/EKU preview from the AP is hot and heavy.

Louisville somehow drops a spot to No. 13 in Deadspin's somewhat serious rankings.

13. LOUISVILLE (1-0).Teddy Bridgewater is who we thought he was, carpet-bombing Ohio's secondary for 355 yards and five touchdowns Sunday while looking about as engaged as Grigori Perelman in pre-algebra. He'll be putting on this show weekly for the next 12 weeks, reinforcing with each performance how depressing it is that he's not going to get a chance to do it against a real, live defense until either a bowl game or the Oakland Raiders' 2014 opener.

Pervis Ellison is now serving as a recruiting expert and the father of one of the top girls players in the country.

Mark Blankenbaker from over at The Crunch Zone gives a thorough breakdown of the Ohio win.

USA Today says that if a college football playoff existed this season, Louisville is one of three teams that would have played their way closer to inclusion in said playoff over the weekend.

CBS says the Rakeem Buckles case is proof that the NCAA needs to tweak its transfer rules...and everything else.

And finally, your schedule of events for the rest of the week. 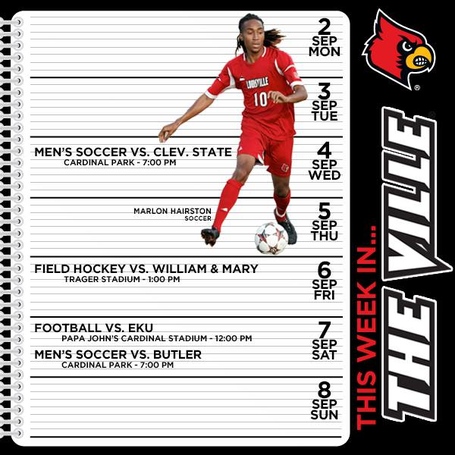