Alex claims that he broke his left arm specifically so that he could receive more attention for the L's he's constantly throwing up with his right. You're a hero.

Hard as it may be to believe, the defending national champion Louisville Cardinals (get used to seeing that here) will begin practice for the 2013-14 season on Saturday.

Cardinals coach Rick Pitino said these are the main objectives at the beginning of practice: "We have a veteran team so we will just work on execution of our presses and learning our sets. We have a strong team but will miss the incredible attitudes of Peyton (Siva) and Gorgui (Dieng). They are incredible team-first guys.'' Pitino added that wing Kevin Ware, rehabbing from a broken leg suffered last March in the Elite Eight, will start workouts in two weeks. "He should be ready to go at it around late October,'' said Pitino.

Big congrats to U of L commit L.J. Scott, whose unreal run from last Friday was SportsCenter's No. 1 play on Wednesday night.

A late-breaking update on the Chinanu Onuaku front:

Interesting development in the Chinanu Onuaku recruitment. Thought to be down to Louisville & Miami ... he'll visit Georgetown this weekend.

ESPN has come out with an interesting set of "future power rankings" for college basketball, which tries to predict the programs that will be the most successful over the next few years based on five criteria: coaching, current talent, recruiting, program power and stability.

It's an insider story, but Louisville checks in at No. 4 behind Duke, Kentucky and Kansas. 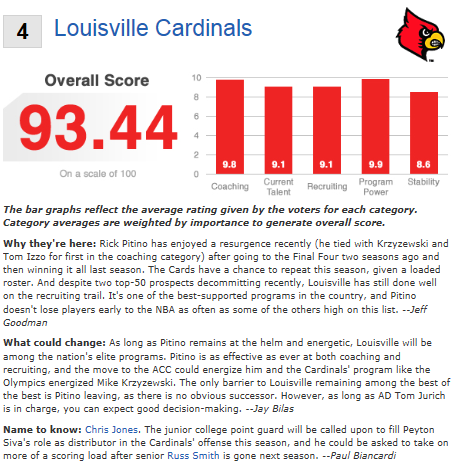 According to Scout.com's Evan Daniels, Malik Hines, a 2014 recruit out of Hazard (Ky) Cordia, stopped by Louisville for an unofficial visit today.

Early Halloween costume idea: Guy Who's Seen You Without Makeup.

Pat Forde writes about the shame in Georgia Tech and Northwestern attempting to stifle the All Players United movement.

Forde also says that no program in America has done a better of job of discovering underrated talent than Louisville.

Louisville (10)
How the Cardinals were built: "Come to Florida North" appears to have been the sales pitch, and a large number of players listened to it.
Star average: 2.91. One five-star, two four-stars, 16 three-stars, three two-stars.
Percent of starters from in-state: 17.4
Percent of starters from in-state or adjoining states: 21.7
Of note: In numerical terms, no team is getting more out of its talent than the Cardinals.
Or maybe nobody has done a better job identifying underrated talent. A defense that ranks No. 1 nationally in points allowed and third in yards allowed starts eight three-stars, two two-stars and one unrated player.

The 18th-ranked Louisville men's soccer team continued its winning ways with a 1-0 triumph over visiting SIUE on Tuesday night.

Russ Smith was in attendance: 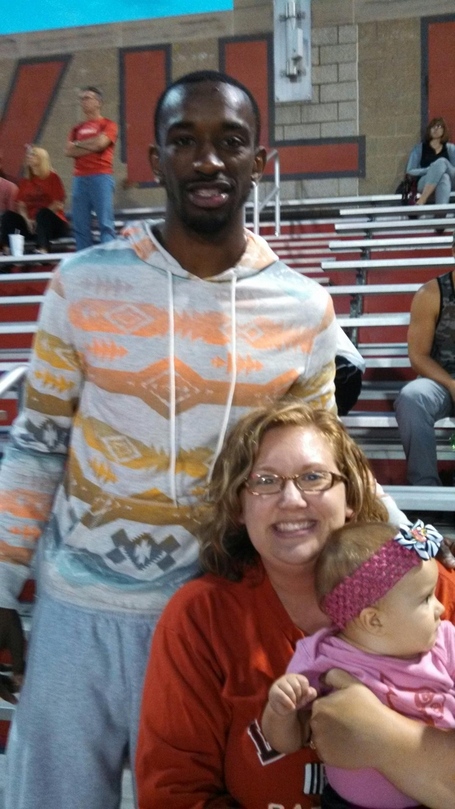 When Nick and Kristen Jones asked Russ if he wanted to hold their daughter, Colleen, his response was: "I might turn her over."

Teddy Bridgewater will be on The Dan Patrick Show at some point Friday morning. You'll know more when I know more.

This was a really tough decision against the teams that ended up fourth and fifth. The defending national champs have a chance to repeat as Rick Pitino has reestablished the program to its peak level. The Cardinals may also have landed Pitino at the right time in his career. You never say never with him, but it looks like he could remain settled in Louisville for the duration. They have a great pro-style arena (and an absurd financial deal with the city on top of it) and are having more impact nationally for the top recruits. It will help if Montrezl Harrell (or someone) has a big season and gets strong NBA draft love. When the other program in the state is minting 1st-round draft picks, there's some room for improvement here in terms of impression on elite prospects. After a year rolling over the American Athletic, Louisville will join Duke, North Carolina and Syracuse to give the ACC an unmatched top four. Should be fun.

Former U of L running back Jeremy Wright was one of three players who worked out for the New England Patriots on Tuesday. Though he wasn't signed to a contract, it's likely that this was a workout the team used to keep tabs on its list of priority free agents.

I'm more and more on the Will Gardner bandwagon with each passing week.

Will Gardner: "We have the best quarterback in college football right now, so if I didn’t learn from him that would be my fault."

Is "bandwagon" the right word there? Because I feel like that it makes it sound as if there's a group of people who want Gardner to start over Teddy and I'm now joining them. Has "fanwagon" been coined yet? I'm on the Will Gardner fanwagon.

Red Raging. With a small child. IN A CCBM.

Shane Hall, a former member of that famed Louisville Magic AAU squad, has committed to Marshall.

Former U of L QB Stefan LeFors, who has led the Christian Academy football team to a 5-0 start (as a coach, not a player...wouldn't be fair) for the first time in school history, is among the ever-growing hoard of Teddy Bridgewater admirers.

"It's the little things that I think I see him do during the games, checking out of run plays, checking into a better run play," LeFors said. "Little things that maybe your everyday people won't notice, that I really enjoy watching him doing, and then just the way he operates in the pocket. He makes guys around him better and it's pretty much an extended handoff every time he throws the ball, he's so accurate with the football. It's just so fun to watch and I know great things are in store for him. Heisman or not, first pick or not, good things will happen for that kid and I'm excited for him."

In the 2013 season opener Bridgewater passed LeFors on the career yardage list and has so far knocked Stefan out of the top spot for career completion percentage, 66.3% to 66.0%.

"He's throwing the ball all over the field," LeFors said. "What I love about him is he's very poised, he's got great command of the offense. All the things that you hear about the good quarterbacks, and he's got all of it. He's never too high, he's never too low, and I know him a little bit from being down there and I know he's a better person. He's a great quarterback, but he's even a better person. You can't help but root for someone like Teddy. He's doing his thing, he's getting a lot of guys involved, and he's got command of the offense for that team and it's fun to watch."

Someone should do a story about Stefan's family. I bet there's something interesting there.

I will never understand why people wear UK clothes on campus.. It's one thing if they're actually good, but they suck. People are ignorant.

The Louisville baseball team has two more scrimmages slated for this weekend.

Via John Clay, the new additions to the Schnellenberger Complex will make it more than twice as big as Kentucky's weight room.

Fox says Ohio State needs to start getting the same schedule criticism from the national media that Louisville has been hammered with.

Louisville's weak schedule has gotten a ton of attention, but Ohio State's pathetic schedule has received little. It should be getting AT LEAST as much.

The Big Ten is awful.

Ohio State better dominate. If so, it starts here.

From the Least Cool Person Tournament to U of L fans' second-favorite team in less than three years: Go Knights. Game-watch party in less than 48 hours.

Teddy Bridgewater is still in the thick of the Heisman Trophy race as all the top contenders begin league play.

UPDATE: No show tonight, feel free to miss it.