Isak spreading the good word to a local surfing instructor in Bali, Indonesia. Don't do anything. Don't try to surf. The less you do, the more you do.

USA Today's college hoops preview is now available on newsstands (they're EVERYWHERE), and has Louisville checking in at No. 3 behind Kentucky and Michigan State. Duke and Kansas round out the publication's top five.

Far more surprising than those rankings are USA Today's first and second preseason All-American teams, which are noticeably devoid of any Russdiculousness. Montrezl Harrell does, however, make an appearance as a member of the second team. 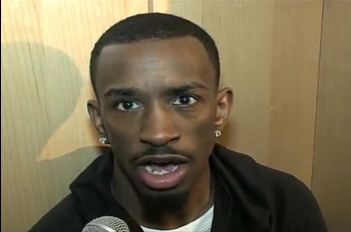 Right there with you, kid.

Bilal Powell is one of three nominees for the "FedEx Ground Player of the Week," which you can help him win by voting right here. Carolina's DeAngelo Williams and Dallas' DeMarco Murray are the other two nominees.

One of the best moments from Saturday's demolition of FIU was Michaelee Harris getting back into the endzone and the excitement it elicited from his teammates. Now, Harris says, he's back.

"It was a long, long process. But everyone supported me and was behind me. A lot of people knew how hard I was working and wanted me to get back."

Harris has finally made it and the touchdown stamped his comeback efforts. He celebrated on the field, did some more on the sidelines and spent the rest of the game smiling and hugging teammates.

"I had a mentality that no matter how many times I got hurt or even if I couldn't run or walk any more, I was going to keep pushing. I kept the hunger until the end and it finally paid off."

A reminder that the men's soccer team is back in action tonight against SIUE at 7 inside Cardinal Park. Louisville fans who purchase a $2 16oz beer at the game will receive a free U of L koozie.

A very happy 21st birthday to Chane Behanan, who I can only imagine will be celebrating at Discovery Zone.

Your Cardinal week in review:

UCF/South Carolina, noon, ABC: we're all having a watch party.

According to Rivals, five-star defensive end Chad Thomas will visit Louisville. Thomas is currently committed to Miami and says he's still firm in that commitment, but wants to take his visits. 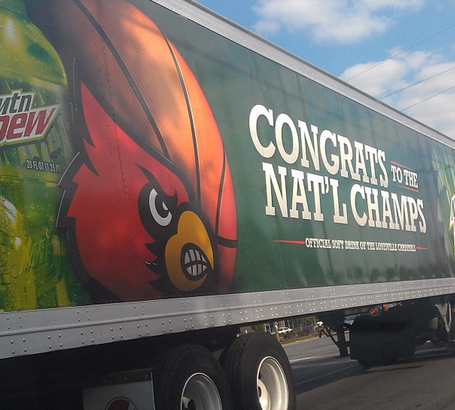 Such an extreme national championship.

Five-star recruit Trey Lyles announced on Twitter Monday night that his final list of schools is down to just Louisville and Kentucky. He also attached a picture that included an image of him wearing both UK and U of L jerseys with Rupp Arena and the Yum Center in the backgrounds. 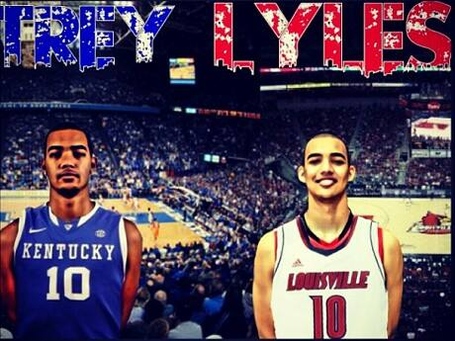 While most consider UK a fairly heavy favorite to land Lyles, my guess is that he may hold out on making a decision until the spring to see how many of the current Wildcats wind up declaring for the draft. Or he may commit to Ball State tomorrow. Who knows, it's recruiting.

Roger Kuznia of The Sporting News talks a little more about Lyles and his Bluegrass duo.

Well, I enjoyed watching Charles play while he was still among the living.

When Charles Gaines is not returning kicks, you can find him eating lunch on coach Strong's car!! #Louisville #L1C4 pic.twitter.com/7qRJJP8bvY

Yahoo says that the NCAA should revisit the one-game postseason ban it handed Baylor women's coach Kim Mulkey for the comments she made after the Bears' loss to Louisville. I say they should add to it.

The Louisville men's golf team is in control of the Cardinal Intercollegiate tournament after two rounds.

Teddy is still going No. 1 to the Jaguars in SI's latest NFL mock draft.

If the Jaguars wind up in this slot - and there's certainly no reason to think otherwise through three weeks - then they'll have two choices. The first is the most obvious: Take Bridgewater, thus far the clear top quarterback in the class, and build around him. The second? Go with Jadeveon Clowney (yes, he's still a viable No. 1 pick) and take advantage of a deep QB class in Round 2.

Speaking of which, this was the front of SI.com earlier today: 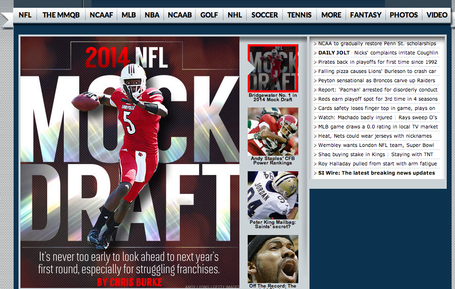 Louisville is the top travel destination in the United States for 2013, according to CNN.

A review of Louisville's pair of baseball scrimmages from over the weekend, where the Cards were victorious on multiple occasions. Hilarious scrimmage joke, Mike.

Tim Sullivan notes the difference between U of L's blowout win on Saturday, and the blowout wins by Ohio State and Florida State.

There are no babies involved this week, but the Red Raging trend continues: 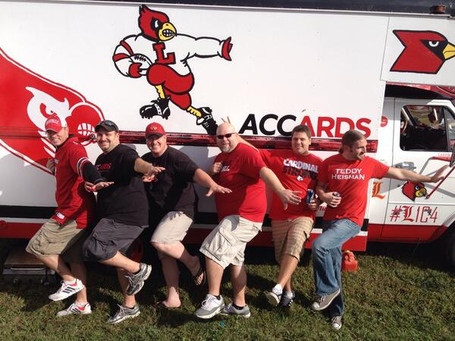 This person has Louisville at No. 5 in his weekly power poll, so he's getting a link.

For a limited time over at the Strait Pinkie store, you can buy a Teddy 5 shirt and receive a Teddy 5 koozie for free. Just use the promo code "CC" and you'll also get 10% off your entire order. 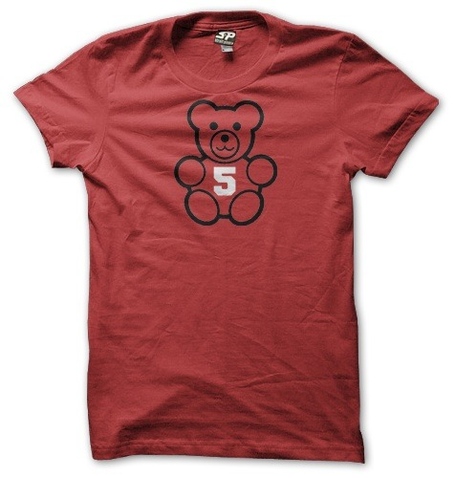 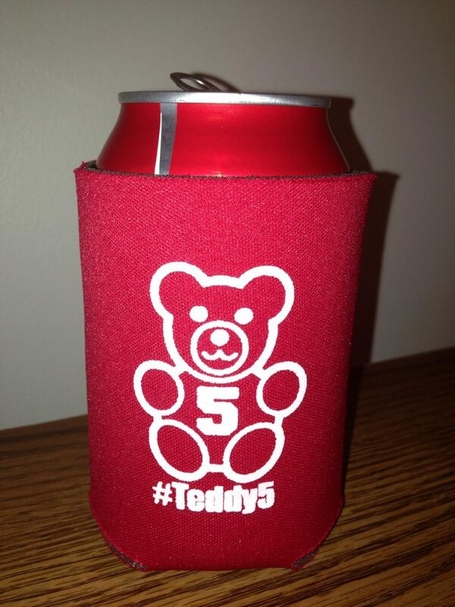 Ethan Moore over at LSL takes a look at the different directions Louisville and West Virginia have gone and continue to go.

I laughed at it while I was watching, but the more I think about it, the more mad the "Dexter" finale makes me. The entire last season had been a total dumpster fire, but I think everyone was hoping that the laziness of the writers could partly be attributed to the fact that they didn't know how to properly set up an amazing conclusion. It was not an amazing conclusion.

I won't say anymore because I don't want to ruin it for anyone who has stuck with the show and still hasn't seen the finale, but it was borderline insulting.

Charlie Strong's wife, Vicki, talks to WAVE-3 about being the coach of the Strong family.

In their three years in Louisville, Vicki said they've been made to feel right at home. They enjoy the people, the seasons and the Kentucky Derby - so much so that when Tennessee showed interest in Charlie last year, they said no.

"You have to go with your feeling, your gut instinct. Just wasn't there," Vicki said.

Vicki starts each game day with tailgating. She said it gets her in the right mindset for the day, but she does more than just cheer on the team. She mothers the players, heading up Thursday candy bar nights.

"They run off that field and attack that candy bar bowl," she said.

Vicki's the yin, to her husband's yang. She tries to get him to relax a little more.

"I say you have 25 minutes you get in the car at the stadium. You have 25 minutes to get home. That should be your unwinding down to switch gears mentally, get into the family mode. How successful is that? It's a work in progress," she laughed.

They are clearly doing something right. Their 16-year-old daughter said she wants to have a marriage just like her parents.

I think the young man has a bright future.

Of the Top 5 WRs in the American Conference, DeVante Parker has as many touchdown catches as the other four combined. #UofL

And finally, congrats to the happy couple from Saturday's tailgate wedding. I would not suggest the Temple Pink Out as a honeymoon destination.