1. Before we get into just how bad Florida International is and the other ins and outs of the game, can we all just agree that it was kind of cool seeing a 72-0 Louisville score scroll across bottom lines all day Saturday? Because it was pretty cool.

This was the thorough domination we waited for all last season but never got, and the one we could never even dream about from 2007 (after the Murray St. game) through 2011. It's so easy to brush the performance aside and say, "that's how a team like Louisville should beat a team like FIU," but statements like that unfairly trivialize the fact that it takes a hell of an effort for an FBS team full of scholarship football players to beat another FBS football team full of scholarship players by 72 points.

Louisville bested a spread by 30 points on Saturday. Those things don't just happen on their own, and nobody, including U of L fans, should downplay or belittle that accomplishment.

At the same time, I completely understand the portion of the fan base that is upset about the product on the field right now, even with all the excuses coming from the brass. I don't care how many kids have been dismissed, how many freshmen Ron Turner has been forced to start; the team that came into Papa John's Cardinal Stadium on Saturday did not compete whatsoever, and it wasn't entirely the players' fault.

I don't care how badly you appear outclassed on paper, every football team - especially an FBS team - should enter every contest with a gameplan designed for victory. FIU didn't have that. They ran the same simple run plays and safe passes over and over and over, the result being an offense that produced 30 yards of total offense over four quarters.

The sad thing is that the Panthers actually had some cause for celebration in the first quarter. There was a forced punt that resulted in the defensive coaches chest-bumping the FIU defenders, and a field goal hold that led to similar excitement. But every time something like that happened, the insanely bland Panther offense just sucked the life right back out of their sideline.

I'll never understand not taking at least a handful of shots downfield, because it's something you absolutely have to do if you have any hope of winning a football game. Even if the shot isn't successful, it keeps the defense honest, which in turn allows for you have to at least a chance at being effective on the ground. Louisville knew FIU wasn't going to throw the ball downfield or do anything exciting in their running game, and the result was more tackles behind the line of scrimmage than we saw for the duration of the Steve Kragthorpe era (not a fact).

I get that you're outmatched here, but what's the worst thing that can happen if you take a few shots to try and generate some excitement and keep the game interesting? You wind up losing 72-0 with a running clock in the second half? Because that's exactly what happened when you made no effort to compete.

The whole thing was eerily reminiscent of the Isiah Thomas debacle in the Yum Center a few years back, and it made me feel really bad for the FIU players. Have enough faith in and respect for your players to let them go out there and win or lose games on their own, don't just admit defeat before you even step on the field.

3. Two things I want to talk about with regards to Teddy Bridgewater, and neither one of them have anything to do with the four touchdown passes he threw.

Eric Crawford already beat me to the punch on the first one, but Teddy running nearly the length of the field to try and throw a block to allow Dominique Brown to complete what would have been a 78-yard touchdown run was surreal. It scared the hell out of me and everyone else who saw what was happening, but it was also Teddy personified. These aren't things he does for additional media love or to add some extra mustard to his Heisman campaign, these are just things that Teddy Bridgewater does because he's Teddy Bridgewater.

Second, well after the game was over, Bridgewater spotted a young man hanging around the stadium wearing his jersey. Naturally, Teddy went right over and gave the boy his postgame hat, which nearly brought him to tears. 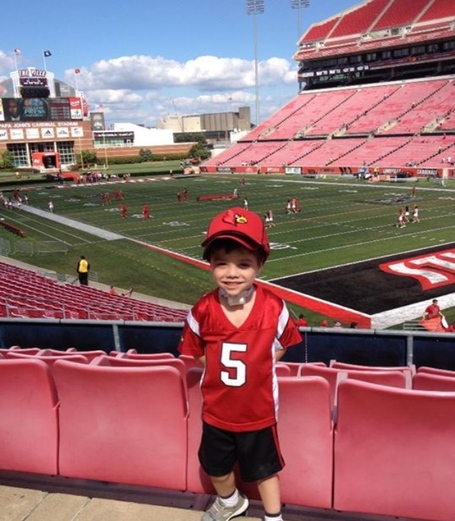 What Teddy couldn't have known is that the young man in the picture has been under anesthesia more than 30 times despite being just 4-years-old. Suffice it to say this type of treat meant more than you can imagine to both his parents and the boy himself.

Once in a lifetime player, on and off the field.

4. The crowd was lighter than both the Ohio and EKU games, but I'll be honest and say that it was much, much better than I was expecting.

There was far more of a buzz in the stadium than there would have been in this exact same scenario as recently as last season, and I think the players appreciated it. There's also been a noticeable difference in the way the team has run out of the tunnel this season. I kept waiting for them to show this level of enthusiasm during the regular season in 2012, and it never really happened. Just another sign that this is the most mature group Charlie Strong has had to work with.

5. All that said, student section, y'all have got to step it up. You're already the smallest group in the AAC, so it's not a good look when you're barely half full at kickoff, and the top half of your section is the most scarcely occupied in the entire stadium.

I know it's college, and noon games make it hard to...shall we say, enjoy the game day experience to the fullest...but that was bad. Be the group that helps change the culture, not the one that makes everyone forget about all the progress made in recent years. Also, this might be the best Louisville football team of all-time that you're choosing to not watch play.

6. Louisville's win on Saturday marked the 10th straight for the program in the month of September. That ties the previous school record for consecutive wins in the month, which was set between 2002-05. Since that streak spanned the reigns of John L. Smith and Bobby Petrino, Charlie Strong is officially the first Louisville football coach to win 10 straight September games.

It's been a long time since those FIU and Marshall losses.

7. Did James Quick deserve credit for the last touchdown of the game that was scored by Brandon Radcliff? According to this photo by Steven Rummage, it would appear Radcliff lost the ball before crossing the plane of the endzone. 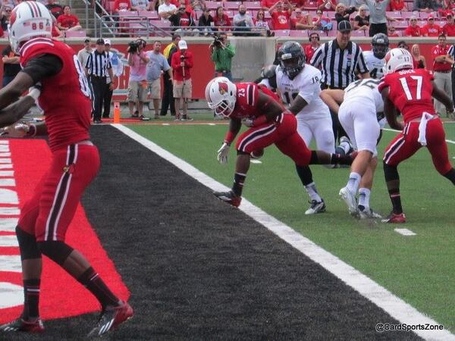 The bigger story here is Quick and how seldom he continues to be used. While everyone understands that James is playing with arguably the most talented group of receivers to ever be on one team at Louisville, the fact the only time he's spent on the field thus far has been mop-up duty in Cardinal blowouts is extremely surprising. Heading into the season, I think most people assumed that Quick would be returning kicks from day one, and would see considerable time with the first team offense. Even Shawn Watson made the remark near the end of fall camp that Quick was "gonna play a lot of football for us this year." Through the first third of the season, that has not happened.

Clearly, this raises a bit of concern over Quick's level of contentment. After all, we're talking about the guy who - according to some scouting services - is the highest-rated recruit to ever commit to Louisville, and represents the epitome of the rare-breed of local athlete who chooses U of L over perennial powerhouses like Ohio State and Oregon.

I don't think there's any question that James would prefer to be on the field a little bit more at this point.

It's going to take a lot of patience!!

How you gone eat and your not even at the dinner table? #hungryforgreatness #goodmorning

Your initial reaction to this might be that Quick needs to understand the situation he's in and "wait his turn," but let's remember that even Teddy Bridgewater, the embodiment of a team player, said recently that he had serious thoughts about leaving Louisville when he was playing behind Will Stein at the beginning of his freshman season. Five-star kids expect to see the field right away, regardless of how old the other guys playing their position are.

Now the other factor at play here is that we don't see what the coaches see during practice. Maybe Quick drops too many passes, maybe he doesn't know enough of the offense to see any snaps with the first team, or maybe they think he's just that far behind the other wide receivers; we don't know.

The fact remains that James Quick is - and I think we can all agree on this - a next-level talent who has already played too much to be redshirted. It'll be very interesting to see what type of role he assumes going forward.

8. A major tip of the cap to John Wallace, who sent five kickoffs into the endzone for touchbacks, including one into the wind. Another kudos to Joshua Appleby, who booted both of his kickoffs for touchbacks. It didn't allow for the kickoff coverage team to get much work in, but they won't need to get much better if the kickers keeps doing that type of job.

9. Bold prediction: nailed it. I think that brings my accuracy percentage over the past three years up to around 3.7.

10. I don't know what you can say about the defense that limiting an opponent to three yards on 34 rushes and 30 yards overall doesn't say for itself.

Lorenzo Mauldin is becoming that next-level threat off the edge that every national championship contender has to have, and Marcus Smith is pretty much the same player. Roy Philon and Brandon Dunn are playing the best football of their lives (and Dunn is becoming one of the best characters on the team). Preston Brown and George Durant are rock solid in the middle and James Burgess just keeps getting better, which is scary. The secondary is as good as the preseason advertisements suggested they'd be, especially at the back.

Even though the competition hasn't been up to par, it feels like we finally have a defense worthy of being called "a Charlie Strong defense." We'll find out for sure in a few weeks.