The CCBM has never skipped a trip to Munich for Oktoberfest, and it isn't about to start now.

With a noon kickoff now set for Louisville's Oct. 5 football game at Temple, the Red/White scrimmage that day has been set for a 4 p.m. start. Tickets to all three scrimmages are available.

Teddy strolls in at No. 4 in this week's Heisman Pundit rankings.

It's crazy how natural this looks: 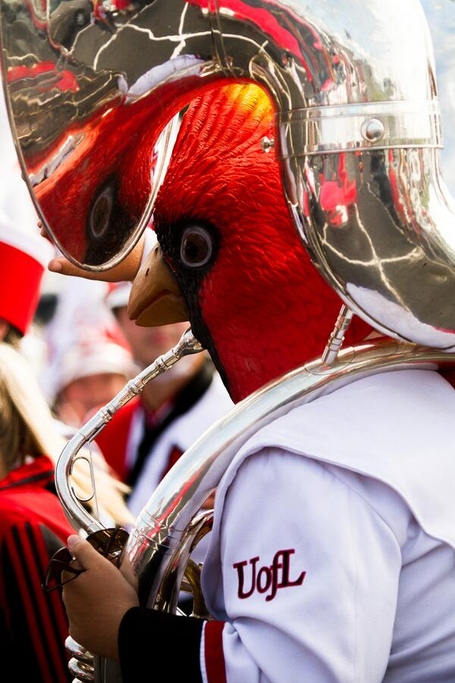 USA Today predicts that Louisville is one of three teams that won't lose a game this season, but says the Cards will be left out of the national championship game. The publication says that Oregon and Ohio State will also run the table.

Steve Jones hit you with the full transcript from Charlie Strong's segment on the AAC coaches' teleconference Monday morning.

Well, we're four games into it, so we can't really get too excited. We know we're going to hit a stretch here with our conference games, and we're going to have to continue to play well on defense. It's just a matter of our guys making plays and getting off blocks, running to the football and being an aggressive, attacking defense. That's what we want to be. If we continue to play well, we'll continue to get turnovers and get the ball back to our offense, and we'll continue to get negative-yardage plays (on defense). But it's still us wanting to play great defense. It's where it all starts.

On whether there was a running clock vs. FIU

It was one of those games that we were playing so well, and we had a better football team. I don't know if it was a running clock and all that, but it was a situation where I never want to get into a game where we try to see how many points we can put up or try to embarrass an opponent because I respect the game too much. I know this: They had a  lot of injuries over on that side of the football, and we weren't trying to embarrass them. We just want to make sure we play well, and when our second unit went into the game, we want to make sure they got the throws and our quarterback could step back to go throw the football and our defense had a chance with our No. 2s to go play well. That was my main concern.

There was no Monday afternoon press conference with the local media since the team has a bye week.

Spencer Hall takes a quick look at every team in the top 25.

DeVante Parker's first touchdown catch against FIU was a semifinalist on ESPNU's weekly "Great8 Plays" program, which picks the best eight plays of the weekend in college football and puts them in a tournament to determine the best. Parker was beaten by a rugby style kick/pass by Eastern Kentucky's punter. 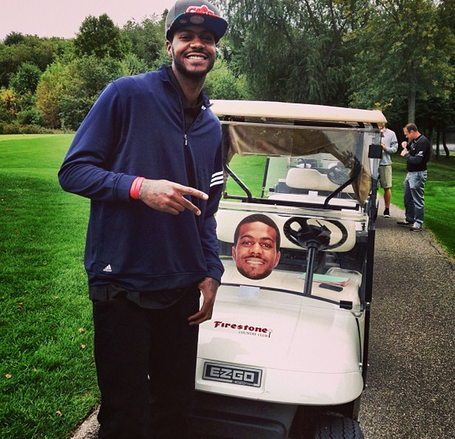 Paul James, Rutgers' leading rusher, will be out at least three weeks with a lower leg injury, head coach Kyle Flood announced Monday. That means he'll miss the Scarlet Knights' Oct. 10 game at Louisville. James hurt his leg during the fourth quarter of Rutgers' come-from-behind win over Arkansas on Saturday.

ESPN's Myron Medcalf notes that all of last season's Final Four teams will be relying on new point guards this year.

Louisville: Peyton Siva to Chris Jones -- There's a lot of buzz about Kentucky, but rival Louisville might be the best team in America. Chane Behanan, Luke Hancock, Wayne Blackshear, Russ Smith and Montrezl Harrell are all back. But Siva will not be easy to replace. He was Pitino on the floor, a point guard who manned the position for four seasons. Chris Jones doesn't have that Division I experience. But he might be more talented. Jones, the consensus No. 1 junior college player in the country last year, should step in and help the Cardinals by giving the program a versatile and skilled point guard. Plus, he'll have Smith in the backcourt next to him. That should make life easier on him. But his voice on the court and in the locker room will both be significant. Those are the traits that will be the most difficult for Pitino to replace.

Trey Lyles tweeted Sunday night that he would be "announcing something" on Monday. That announcement, according to his father, will definitely not be a commitment. Kentucky and Louisville are considered to be the two favorites for the 2014 big man.

Cliff Alexander, who recently said that he wants to play college ball with former U of L commit JaQuan Lyle, says that he is no longer considering Kentucky. Maybe they both will end up at DePaul.

Thanks to everyone who let me know about the picture in the middle of Instagram's front page yesterday. It's glorious. 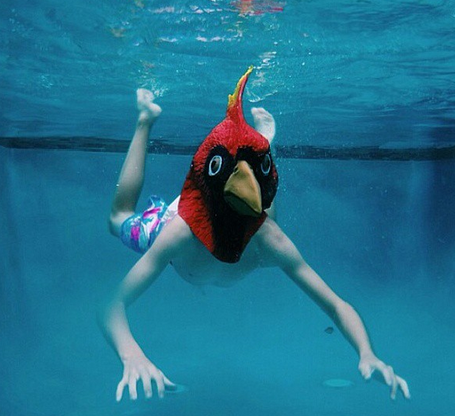 The U of L men's soccer team opened up its AAC season with a decisive 3-0 win at Central Florida. Your game highlights are here.

The Cards return to the pitch on Tuesday night when they'll host SIUE inside Cardinal Park at 7. Louisville fans who purchase a $2 16oz beer will receive a free U of L koozie.

One final soccer note, senior defender Jimmy Ockford was selected as the American Athletic Conference Defender of the Week on Monday after helping U of L hold UCF to just one shot on goal.

We'll have the full "Cards in the NFL" post later this week, but for now, a quick (but serious) congrats to Bilal Powell on his career day yesterday. The former CC crush carried 27 times for 149 yards in New York's 27-20 win over Buffalo.

Your weekly schedule of U of L events: 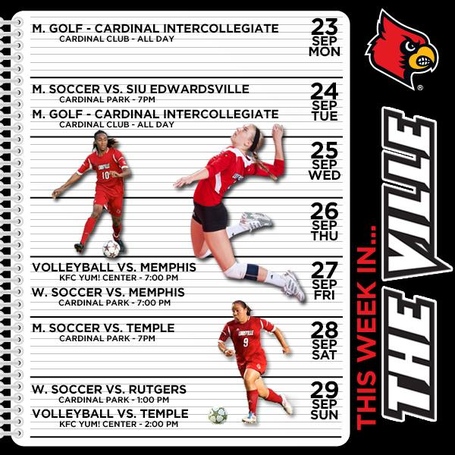 CBS Miami says that Saturday was rock bottom for the FIU football program.

The debacle that is the Panther program and their PJCS beatdown also gets a mention in Yahoo's weekly "After Further Review" feature.

The UPS Performance Index Rankings are weird, but they have two AAC teams in the top 10 right now, so I like them.

The statistical components of the UPS Team Performance Index are as follows:

For each of the five components, an Index value is created using a proprietary algorithm, with 100 being average.  For all categories, anything above 100 is better than average and anything below 100 is below average.   The maximum component index is capped at 200 in any category. These components, and the team's win-loss performance, then are combined to reward a team that excels in all facets of the game.

The top ten teams in the UPS Team Performance Index for the week beginning September 23 are:

Bill Connelly grades the 29 undefeated teams in college football, and gives U of L a 3.5 GPA.

And finally, a detailed look at "Tanking for Teddy" (still prefer "Play Dead for Ted"), and how it took a turn when the Browns upset the Vikings yesterday.