The sixth-ranked Louisville Cardinals look to move to 4-0 for a second straight year by taking care of business against a Florida International team that has struggled mightily so far this season.

Saturday's game at Papa John's Cardinal Stadium marks the third of a four-game series between Louisville and FIU. The final game of the series is scheduled to be played in Miami during the 2014 season. The series record is tied at 1-1, with each team winning at the opponent's home stadium the past two seasons.

FIU notched its first win over a BCS conference opponent by stunning Louisville 24-17 two seasons ago behind a remarkable individual effort by current Indianapolis Colt T.Y. Hilton. The Cardinals returned the favor a season ago by winning a tough 28-21 game in Miami. 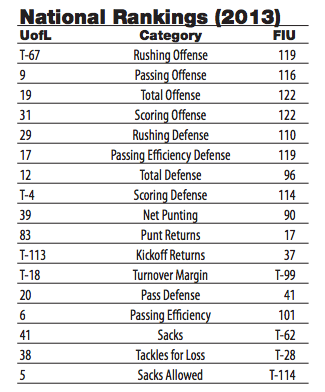 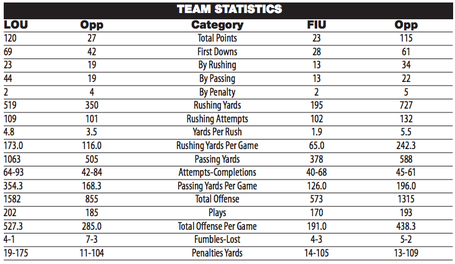 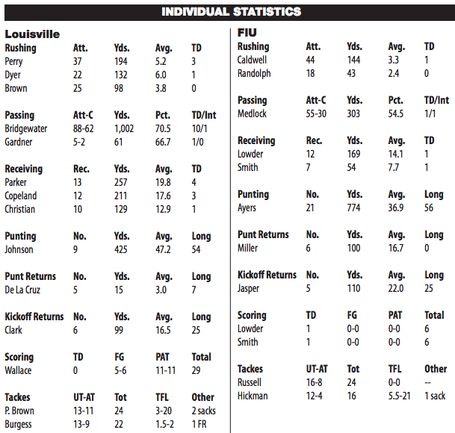 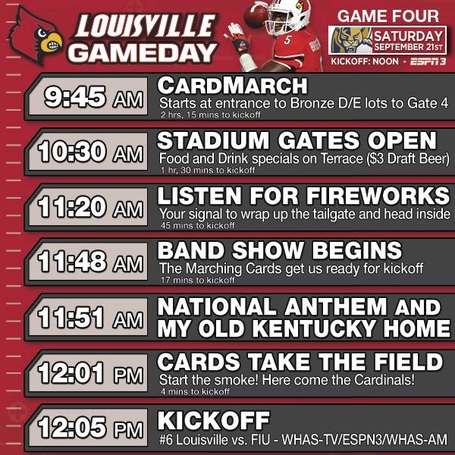 A little bit more from GoCardsGuy:

Turner spent this offseason trying to establish the type of culture he wanted for his program. That led to him dismissing a good amount of talented players from his team. Add in the other guys that he lost to academics and he was left with one true returning starter this season. Quarterback Jake Medlock returned to lead the offense and he has pretty much been running around trying to make plays since the first drive of the season. Playing behind a line that has a total of 5 starts isn't ideal for any quarterback but when you throw in the fact that not a single skill positioned player had played before, it becomes pretty hard to do much of anything on offense. Medlock has put forth a great effort this season, but playing behind such an experience line has led to him more than likely sitting out the game this week with a concussion.

E.J. Hilliard will more than likely get the start this weekend against the guy he backed up in high school, Theodore Bridgewater. In my honest opinion, Hilliard should have been starting this weekend anyway. He played in a relief role in last years game as a true freshman and immediately showed the poise and skill that reminded some of Teddy himself. Hilliard is a guy that can escape the pressure that he's bound to see, as well as finding the open receiver if one becomes available. Medlock is a perfectly capable player and has a much more experience, but sometimes a switch at the qb spot is needed.

The Golden Panthers don't have much else going for them on offense. I could list all of the ridiculous offensive deficiencies, but I did that on Twitter the other night and it is just flat out sad. Wideout T.J. Lowder had a breakout game this past weekend with 125 yards and a touchdown, but it has to be mentioned that they played Bethune-Cookman last week. Running back Lamarq Caldwell has been bottled up so far this season, but he definitely has some quicks and legit speed if he gets loose. Outside of those two guys there's not much going for the offense so far this season.

Defensive tackle Greg Hickman absolutely jumps out at you on film. He is an absolutely disruptive force and he will line up at a different spot on the line all game long. If there is one bright spot for this team (seriously, there might only be one bright spot) its that it is getting great effort from its interior line. Hickman and Nose Guard Isame Faciane have combined for 10.5 tackles for loss on the season even though they are facing routine double teams. Hickman is a guy that will more than likely end up playing on Sundays next year and Faciane wouldn't be a bad bet to do the same. The defensive line as a whole has played pretty well against the pass. The run on the other hand is literally a different story.

Louisville will again see a basic 4-3 defense that will rely heavily on zone coverage to stop Teddy Bridgewater and his receivers. The FIU back seven honestly hasn't even been tested much because teams are just running the ball down their throats. However, when teams have decided to pass the ball they have done so with ease. FIU is giving up nearly 10 yards per pass attempt. That's 10 yards whether the pass is completed or not. They have statistically made every quarterback they've faced look like Teddy Bridgewater. It's a byproduct of how inept the offense is. The defense is on the field way to often and they don't have the depth or experience to keep up. Louisville has controlled the ball so far this season and they will look to do the same this weekend.

I said that the 7.8 against EKU would be as low as the meter got all season, but I was wrong. A nooner in between the Kentucky game and a bye week against perhaps the worst FBS team to ever enter Papa John's Cardinal Stadium is pretty bad.

The good news is that I can say with 100% certainty that this is as bad as it's going to get. From here on out, every game is a conference game, and that national microscope on the Cards is only going to get larger. Even if names like Houston and Memphis aren't enough to get you jacked up, the situations will demand the excitement that the teams don't.

Getting crazy again despite the shaky debut by the Teddy Heisman shirt in Lexington last week. This has absolutely everything to do with the infamous white polo debacle against FIU two years ago. Demons must be exorcised. Also, new Red Louisville Football Shirt (proper name) and red Cardinal shoes are both unavailable this week. Is it a terrorist plot orchestrated beautifully by Travis Diener? I'm not saying it isn't.

Tailgate team is looking pretty thin this week, and as a result there has been virtually no communication. This is not the way I wanted to make the transition into October.

Teddy's the obvious choice, and he'll put up the numbers, but Clark surprises everyone by finding his way into the endzone twice.

Griffin reportedly got a little bit banged up early in the UK game, which is the only thing that could keep him from seeing the field.

Bold Prediction: Louisville returns a punt or a kick for a touchdown.

We're off to another rocky start on these, so I might as well swing big. Shooters keep shooting, you know?

Im taking #FIU with the upset over #louisville #pantherpride

Caylin Haptmann is a former player who currently plays for the Browns, but I'm still counting it. Also, the Glanton kid made his tweet just hours before the Panthers lost to Bethune-Cookman last weekend. He has since taken down his account.

--Teddy Bridgewater has thrown for at least one touchdown pass in 15 consecutive games.

--After three games, 20 Panthers have registered their first collegiate start. That figure already ranks as the fourth-most in a single-season in program history.

--Louisville and FIU are two of just 13 FBS schools that began the season with zero seniors on their starting offensive line.

--Louisville has posted a 72-25 record in home games since the program moved into Papa John's Cardinal Stadium in 1998.

--When scoring 20 points or more in a game under the direction of Charlie Strong, the Cardinals' record is 27-6. Louisville is also 17-3 under Strong when holding opponents to 20 or fewer points.

--The Cards are 14-6 in non-conference games under Charlie Strong, and 8-0 over the past two seasons.

--U of L is 11-3 in September games under Charlie Strong.

--Louisville has 14 players available who started in last season's win over Florida International. The Panthers, conversely, have just three available players who started in the 28-21 loss to U of L.

--"We can't have a letdown because of the last two years this team has played us pretty well. We know they'll play hard. We know a lot of guys on the team, so it's going to be a big Miami rivalry with those guys. It's going to be a tough game no matter what." --Preston Brown

--"We know them. We know how they're going to play. We know everything about them. There's no intimidation. Just play your best." --FIU wide receiver Dominique Rhymes

--"One of the toughest tasks for a coach is to get his team ready that's highly favored. I want our team to play as if it's got something to prove. A lot of teams know how to be successful, but very few can handle success. ... Every time we become too satisfied, satisfaction leads to loss of hunger." --Charlie Strong

--"It's a big rivalry just because so many players here are from Florida. Just playing against players you played with in high school or Little League makes it a rivalry." --James Burgess

--"(Bridgewater)'s smart, he's instinctive, he's accurate, he leads. When you put on the film and watch somebody play, you know [whether or not] that quarterback is in charge. Sometimes, you don't see that, sometimes, you do see that. You put him on and you say, ‘That quarterback is in charge.' There's nothing he can't do. He can throw it, he can run. He can get them out of bad plays and into good plays. He's a hell of a football player. As good as I've seen in a long time." --FIU coach Ron Turner

--"We look at it as an opportunity. There's no pressure on us." --FIU running back Lamarq Caldwell

--"We have an opponent this week that is not playing well right now because of new coaches installing a new system there. But each of the last two times we've played them, it's been a struggle for us." --Charlie Strong

Florida International is bad. This team is also too mature to overlook just how high the stakes are each and every time they step onto the field, regardless of who they're playing.