I'm not sure why, but this is one of the most unsettling CCBM pics I've ever seen. Way to show us how it's done, young Charlie.

Congratulations to Rick Pitino, who spent his birthday in Chicago accepting the Ray Meyer College Coach of the Year Award at the Chicagoland Sports Hall of Fame Banquet.

It's about time that guy won something.

Credit "Lancaster Online" for knowing that less can be more in a headline when the situation is right.

That's what those in the biz refer to as, "clickable."

Louisville's third down prowess is again a topic of conversation.

Central Florida landed one of the biggest basketball recruits in program history when class of 2015 center Alex Owens committed to becoming a Knight earlier this week. One of the biggest reasons for Owens heading to Orlando?

Owens said that UCF's move from Conference USA to the American Athletic Conference was key.
"They play in the same league as Louisville, Cincinnati and UConn," Owens said. "Louisville won the national title last year. I'm hoping that I can help take this program to another level."

Uh-humm. I wouldn't want to be the student manager who shows him UCF's 2015-16 schedule that fall.

Kudos to The Voice-Tribune for recognizing the popularity of their new gigapixel image and doing something positive with it. From now on, the Yum! Brands Foundation will donate $1 to the Dare to Care Food Bank's Community Kitchen for each Facebook like, tag and tweet from the Louisville/Kentucky gigapixel shot.

FOR THE LOVE OF GOD WILL SOMEBODY FEED TEDDY.

Who wanna start letting me use their "Ville Grill" swipes at night??? #starving

If you're a fan of American Cheese Singles and triscuits, just say the word, my man. 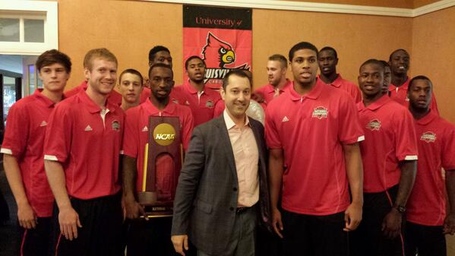 I know it's just because he's in the front, but Wayne being bigger than everyone else still makes me laugh. Also, CAMERA LEFT, STEPHAN.

Congrats to Cardinal great Angel McCoughtry on leading the WNBA in scoring for a second consecutive season. Next up is the playoffs, where she'll look to lead the Atlanta Dream to their first WNBA title.

Thanks in large part to a phone call from Rick Pitino, former Cardinal walk-on Chris Brickley has a gig with the New York Knicks.

At the very least, you have to respect the Cleveland Browns' commitment to the "Play Dead for Ted" movement. If we're being honest, I'd rather see Teddy go to Cleveland than Jacksonville because it's closer and because the Browns at least seem somewhat interested in their franchise. My only fear is that it will be impossible for him (or anyone) to succeed in either place.

For a second straight year, Athlon ranks Tom Izzo as the best coach in college basketball. I'd be more inclined to give that distinction to the guy they have at No. 2.

2. Rick Pitino, Louisville
Record: 662-235
Record at Louisville: 310-111 overall (.736), 137-67 Conference USA/Big East (.672)
NCAA Tournament: 48-16, seven Final Fours, two national championships
Pitino further added his name to the record book by becoming the first coach to win an NCAA title at two different schools. He'll have a chance to add a third title to the mantle as the Cardinals enter 2013-14 as a top-three team. In the AAC, he has no peer has an Tournament coach. His 48 NCAA wins are 15 more than the other nine coaches in the league combined. His teams are generally among the best defensive squads in the country with their ability to force turnovers. Pitino also is an excellent in-game tactician. But the legendary coach also has softened his demeanor in recent years. Just ask Peyton Siva and Russ Smith.

Eric Wood is one of four NFL linemen who have signed on to help market a line of moistened toilet paper named "One Wipe Charlies," which are aimed at men.

The players - the Dallas Cowboys' Travis Frederick , the Minnesota Vikings' John Sullivan, the Buffalo Bills' Eric Wood, and the San Diego Chargers' Nick Hardwick - will be part of a marketing blitz, entitled "Clean Snap," to kick off in two weeks.

It's the brainchild of Mike Dubin, CEO of Dollar Shave, who told The Post: "Most of the centers we approached were game to try this. They are guys not a lot of people are reaching out to. "

"We wanted to make something just for men; it's aspirational: a way to get it done in one," Dubin said.

A survey conducted by Dollar Shave found that 89 percent of wipe users were very satisfied with the cleanliness of their butt after using a wipe - versus only 58 percent for traditional TP.

"I've been using wet wipes for years," said Dubin, "Its an enjoyable experience."

That is fantastic. These are the types of deals you're able to land when you write guest posts on CC.

It's hard to be accurate, but it drives goalies crazy. Russ Tyler is back, y'all.

Per Twitter, Louisville has offered a scholarship to class of 2015 point guard Nuwr'Iyl "New" Williams. Williams, who hails from Santa Monica, is currently rated as the No. 51 overall player in the class by Rivals.

As someone currently dealing with the misfortune, I'd say the worst part about losing your hair is no longer getting any of the good roles when someone plays the "cast your friends as characters in movies we all know" game. The best (or at least the most righteous) characters always have tremendous or at least above average hair, and when yours starts to go, so do those roles.
I had a friend tell me that I would have been in Slytherin a few months ago, and I was almost too stunned to be appropriately insulted or devastated. Granted, my moral compass hasn't always been fixated in the right direction, but Slytherin? People in Slytherin don't cry every time they watch Field of Dreams. I'm not saying I do that, I'm just saying...you know what, it doesn't even matter - I'm not Slytherin.
Just enjoy those full locks while you can, kids, because once they start to go, so do the Scotty Smalls and Adam Banks comparisons.

National Football Post has Teddy at No. 5 in its Heisman rankings for this week.

Louisville QB Teddy Bridgewater: The junior was solid in the Cardinals' 27-13 win over Kentucky last week, as he went 16 of 28 passing for 250 yards with one touchdown and no interceptions. He was considered a favorite for this award by a lot of national pundits in the preseason, especially because he essentially started his campaign last year with the Sugar Bowl win over Florida. The major issue for Bridgewater is he will not have a ton of chances to perform on a big stage because he plays in a conference that is not elite. It may not be fair, but the Cards may have to go undefeated for Bridgewater to win. And, fair or not, he can't really afford to have games with just one touchdown.

Not to be outdone, NFL.com has The Ted at No. 3 in its own rankings.

Bridgewater tumbles down the list through no fault of his own, but the lack of competition on the Cardinals' schedule makes it hard for him to retain his spot at the top when others are putting up big numbers against elite squads. To be fair, Bridgewater fared well against an SEC opponent (16 of 28 passes for 250 yards with a score against Kentucky) and showed the superb pocket passing skills to make every throw in the book. While he still needs a stern test to allow scouts an opportunity to see how he handles adversity, it's hard to take issue with any aspect of Bridgewater's game.

A very happy birthday to Cardinal running back Senorise Perry...and some other people, I'm sure.

Bridgestone is about to release a new line of college logo golf balls, and Louisville is one of the 19 schools it's chosen to be included. 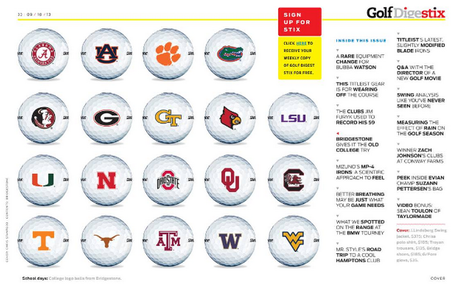 You can read more about the line in this month's Golf Digest.

Kentucky football players aren't allowed to listen to music while lifting weights, and the justification behind the rule is actually pretty interesting.

"We actually showed them, through research, that there is something called 'fight or flight' response, and when you're about to go in the game, or if you're about to get into a fight, your nervous system excites. But when you're constantly plugged into music, we found that your body doesn't have that natural response." he explained.

"So when we first started training, we wanted to show these guys how to naturally, and fully control what we call their 'arousal levels', and it wasn't fun at the beginning, but then we explained to them that, 'Guys, you have to learn how to create your own music' and it started to click with them that YOU create your own level of excitement. You don't want to be hooked on some type of stimulus."

We're about two sportscasts away from Lefkoe starting his Senate campaign.

The Louisville baseball team will be holding two open scrimmages this weekend inside the newly-renovated Jim Patterson Stadium.

JUST THINK ABOUT IT, TEDDY.

One of the three guys in the picture below is the Final Four's reigning Most Outstanding Player. Another was an honorable mention all-tournament selection at the 1998 Beaver Bat Classic baseball tournament. 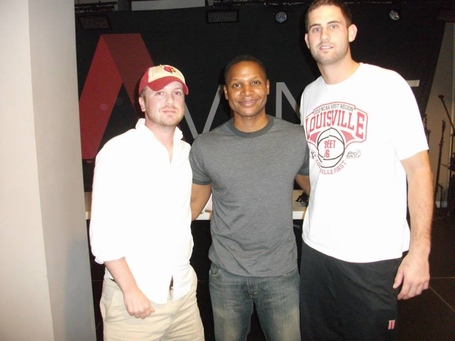 Show up to the Meat & Potatoes program at U of L and you might just get to hear Luke Hancock give his thoughts on Miley Cyrus and/or the twerking phenomenon. The reward outweighs the risk, folks.

A year after getting themselves into Charlie Strong's doghouse, B.J. DuBose and Charles Gaines are both playing big roles (subscription) for Louisville.

Deadspin drops Louisville to No. 15 in its weekly top 125.

Central Florida also makes an early appearance at No. 25.

Saturday's game being announced as a sellout on Monday was obviously positive news, but I've seen a large number of people on social media looking to sell tickets over the past couple of days. In the past, that's typically been a bad sign as far as the number of filled seats for the game goes. Here's hoping all of these sellers are finding willing buyers and that the fan base can keep the positive momentum it made over the first two weeks going.

I know it's a nooner, and I know FIU is really bad, but it's going to be two and-a-half weeks before you have the opportunity to head out to the stadium with your friends and family and watch one of the best Louisville football teams ever with your own eyes. If you have the means, take advantage.

Rick Bozich wonders aloud whether or not Florida International will be the worst team to ever visit Papa John's Cardinal Stadium.

Here is the early evidence: Louisville is favored by 42 ½ points. According to the data at PhilSteele.com, Louisville has never been favored by more at PJCS.

OK, I understand that those Louisville teams weren't as powerful as this Louisville team. That's a factor. So those three visitors had to be truly inept. They were.

FIU has played 10,800 seconds of football this season. The Panthers have not led for one second.  Not a snap.

When in doubt, I usually retreat to the safety of Jeff Sagarin's computer rankings. Sagarin currently ranks FIU at 175 in the nation. Only three FBS programs - Massachusetts (176), New Mexico State (186) and Georgia State (213) - are ranked lower.

If only Pete Garcia had looked into a crystal ball before firing---you know what, I'm not even going to make that joke and then make fun of it afterwards because it's too awful. If you didn't know where I was going, just consider yourself lucky and read on.

Mark Coomes writes that fear of continued domination at the hands of its arch-rival will be the only real reason Kentucky cancels its football series with Louisville, should that event come to pass.

And finally, I'm back on the radio with Mark Ennis tonight from 6-8 on ESPN 680. Listen live or anytime on ESPNLouisville.com.